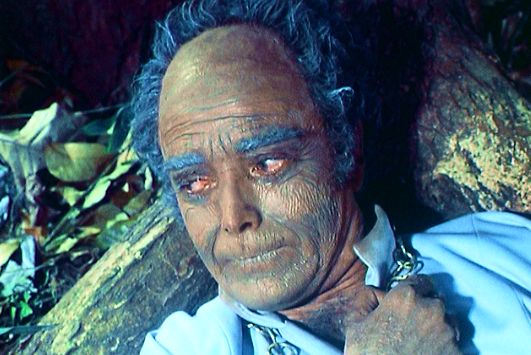 What little info you will find out there about the mid-seventies turd known as “The Thirsty Dead” will inform you that it is in fact, going to be a turd.  Also that it seems like it ended the career of writer-director Terry Becker.  And that means, I really want Lovelock and Starkwell to find out why.

[Dancer Girl hears a radio broadcast about disappearing women.  And then she is abducted.]

Lovelock: Well, give it some credit, it’s moving fast.

[Another girl is taken.  This time we see the abductors, they look like hooded monks.]

Lovelock:  Oh no!  Kidnapped by Jawas!

Starkwell: For some reason I feel like you’ve made that joke before.

The cloaked abductors, looking an awful lot like a pretentious Doom/Drone metal band, put the girls on a row boat and paddle them into… a jungle?

Starkwell: Where were they before that they can be paddled into the rainforest somehow?

Lovelock: And why is that one bitch so excited to become a sex slave?

Starkwell: I’m assuming it is to titillate the male audience.

Lovelock: Why would the leader of the Filipino Monk Kidnapping Gang be a Euro-Trash looking dude with a white man afro and big shiny fucking medallions?

Starkwell: Keep us guessing I guess.

Lovelock: Is that a frozen head?

This type of dialogue went on for a while, as they grew more confused by the slow-moving film that seemed to have a million things going on.  I couldn’t possibly document all of their questions.  On-screen, the four girls that were kidnapped early on are bathed and sent to some sort of luxury prison cell.  One of the girls, Laura, is apparently their… savor… or something?  Anyways, she is given a luxury suite.

Lovelock: So… when are we going to see some of these thirsty dead I read about in the title?

Lovelock: Hardly.  Was she undead or just in need of a shower?

Then Laura watches some kind of interpretive dance play about the society’s history and her new part in it.  Lovelock falls asleep for a while.

Lovelock:  Why is his cape SO long, but his robe SO short?  That is WAY more dude leg then we need to see.

Then there’s this ceremony where they lay all the women out and draw blood from them to drink.  Lovelock is really growing tired of this shit.  Starkwell, apparently, already left.  Where’d he go? Nobody knows.

[Laura is thrown into a room full of old zombie women?  I think?]

Lovelock: Aw just kill her and end this fucking movie.

After a couple more dance sequences and people talking to a frozen head, the girls escape to a nearby village, but Cult Leader Euro-Trash Guy that looks like he belongs in a bad Star Trek episode catches up to them and brings them back.

Lovelock: I feel like his robe is getting shorter.

[Then Captain Short Robe lets all of the zombies loose.]

Lovelock: So… the zombies are actually just really old dried up and used women?

Whether or not that even makes any sense, it doesn’t stop Lovelock from enjoying seeing the old decomposing hags tear apart some of the cult members.  And in the end, three out of four of the ladies get away.  Lovelock was hoping none would.  THIS MOVIE SUCKS.
Documented by Kev D. and Posted at 20:51