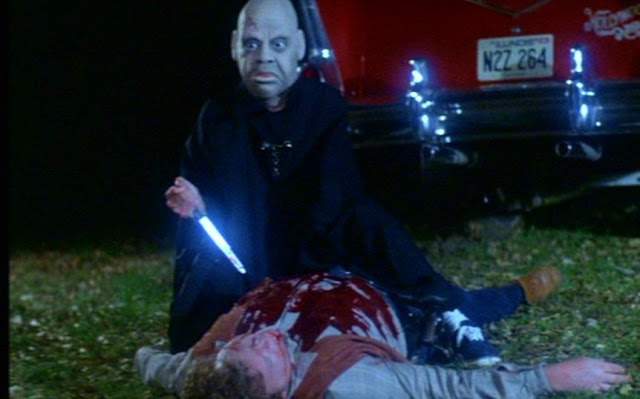 Another mad scientist pick from the eighties, this one revolves around kids being turned into killers.  It’s been done a few times before, and a few times since.  The issue, usually, with this type of premise is that kids are usually terrible actors and annoying to watch.  So movies, even with a good story, end up being a mixed bag.  I’m sure this will be no different.  I’m pretty sure this may not have a good story either.  The movie opens with a teenager at home alone.  The lights go out and someone kills him, I THINK.  We only see it happening in a shadow. It is the cheesiest looking and sounding death that Lovelock or Starkwell have ever seen and heard.  This is really setting the stage for one wild affair.

[Single dad and his son, Pete, do their morning routine together and have breakfast.]

Lovelock: Who stands naked in front of their dad like that?

Starkwell: What’s with all of the first person view shots?

Lovelock: Is that old woman the maid?  The place is filthy!  Fire her.

[There were more questions, but I’ll stop for now.]

As is usually the case with cheap and shitty eighties films, the high school students appear to be played by mostly actors in their twenties and thirties.  Maybe even forties.  I guess there goes my concern about 'annoying kids'.

[Students watch a creepy film with a scientist who controls a chicken.]

Starkwell: What the hell kind of high school class is that?

Starkwell: They’re not cooking the chicken.

Then the ‘kids’ go to a costume party at someone’s house, and they all dance to a shitty imitation E.L.O. song.  FOR A REALLY LONG TIME.  There’s even a choreographed part.  It’s kind of creepy to be honest.  In between dancing shots, it shows a hand grabbing a knife from the kitchen drawer.

[Dude in a creepy mask kills some teens with a big ol’ knife.]

Lovelock: Obviously where the “Scream” movies got ALL of their ideas.

[Dude takes mask off after he gets away, it’s the guy from the opening scene that was ‘killed’.]

Lovelock: Wait… is that the guy from the beginning?

Starkwell: No, I think that’s the guy that killed the guy in the opening scene.

So Pete apparently works part time at some kind of research lab where they make little kids ride exercise bikes and then play pinball if they pedal for long enough.  He’s there to be a test subject for experimental drugs.

[Pete takes a behavior modification drug that will enhance his senses and make him a super human.]

Lovelock: It’s like that Bradley Cooper movie, except not as bad.

Then we get back story on Pete.  He goes on a date and seems to have SUPER SENSES.  Then he bones the girl.  Then some old maid lady finds a dead boy at the house she’s looking after.  But wait the killer is still there!

[The killer, some young girl this time, that we have never seen, kills the maid.]

Lovelock: Why was she cutting the boy’s hands off?

[Pete goes back to the lab, and they’re injecting him with some shit, and strapping him in  a chair “Clockwork Orange” style.  They inject him IN THE EYE.]

Starkwell: Why would this lab even exist?  Without anyone calling the POLICE?!?

Lovelock: The answer is MAKE BELIEVE.  Anyways, I’ll forgive all the dumbness due to that fantastically gross eye gag.

Then Pete wakes up and I ASSUME he doesn’t remember anything, since he seems quite calm and not wanting to call the cops.  If he does remember the eye injection and is acting this calmly, then he is, as Starkwell noted, “the biggest idiot in maybe the whole world”.  There’s a whole side story about Pete’s dad, who is a police chief, and APPARENTLY the mad scientist is some kind of super villain that Police Dad had hunted in the past.  Really.

Starkwell: WHAT A CONFUSING MESS, FUCK YOU, MOVIE.

[Pete pees blood, they show it.]

Lovelock: I don’t feel so good.

[Police Dad finds a casket in the foundation of his house.]

Lovelock: Why was he looking for that?

Starkwell: I’m certain that I don’t know.  I’m not entirely sure that the film makers know either.

We do finally get the back story.  The Dad’s girlfriend explained the whole thing to Pete.  Pete seems to understand, I sure don’t.  I guess the Mad Scientist from the chicken video killed Pete’s mom years ago, while she was working for him.  The casket is still not explained.

[The drugs take hold of Pete, he follows his dad to the lab, and helps the Mad Doctor capture him.]

Starkwell: Why do we care, what the hell?

[Lovelock didn’t say anything.  He’s so confused that I think his brain is actually broken.]

So under the Mad Scientist spell, Pete cuts himself a couple of times.  Then Mad Scientist orders Pete to kill his father and, THEN PLOT TWIST, Pete stabs the Scientist and says “YOU ARE MY FATHER”.  So I guess Police Dad’s wife was a cheatin’ bitch and this movie plain sucks.  The end.
Documented by Kev D. and Posted at 08:32