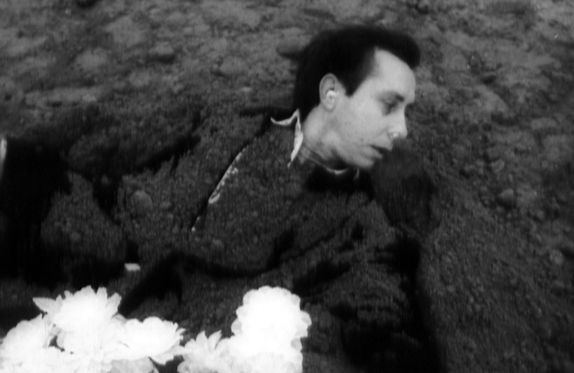 I have no idea what the fuck this is gonna be about.  The film starts off at a guy’s funeral.  Though he looks dead, he appears to still be able to see what is going on, as his wife, doctor and friends look down at his corpse in his casket.  Then he’s buried.  Is he dead?  Is he alive?  Who knows?

[The wife, and other men at the funeral, look at each other and smile.]

Lovelock: Usually movies with many titles are terrible.

Starkwell: And that’s based on?

Lovelock: Nothing I guess.  Well… this movie, so far.

After an incredibly long driving scene, we see Montel (the dead guy) rise up out of his grave.  It’s pretty funny because you can see that the actor put cotton balls in his ears and nose so that no dirt would get in it.  But on a whole, it’s a pretty cool scene, especially for the late sixties.

[Cut to the widow, having her boobies felt up by the doctor, she told the doctor that she is A VIRGIN.]

Starkwell: I don’t think you can die from that.

Lovelock: You can if you blow your fucking brains out.

At this point there is an incredibly long and drawn out scene where Montel knocks a girl out in an alley, breaks into a nearby house, undresses her, feels her up and kisses her body parts, at which point she wakes up and… tells him to screw her?  But then he runs away… Seriously it’s a REALLY long scene.  Starkwell leaves.  Lovelock stays, confused, alone, scared.

[Montel hides in a dressing room and watches a transvestite SLOWLY undress herself/himself.]

[Cut to, an apartment, two women are making out and undressing each other.]

Lovelock: Right because that’s super relevant to the story.  Oh wait, there is no story.

[The lesbian scene lasts, a few minutes, then Montel hides in the closet.  The lesbians find him and want him to join in… but he runs away… scared?]

At this point Lovelock realizes that there has been insanely little dialogue, and that most of this movie has been people groping one another.

Lovelock: What’s with the close-ups on the eyes and/or lips?  Why are they holding the keys like that?  HE JUST MET THAT WOMAN ON THE STREET, why would she invite him in and then strip?  What planet is this?

Sometime after another five minutes of Montel pulling off a woman’s panties and fondling her butt, it looks like he actually finished the job this time, and did sex all on that woman.  And then they finally developed more of the story.  It turns out that the bitch wife buried him alive… on purpose.  So… he’s not a zombie?

[Montel breaks into an apartment, watches a couple do it, then he… knocks the guy out and does the girl?]

Lovelock: Did she not notice that it’s a different guy?