Juan of the Dead. 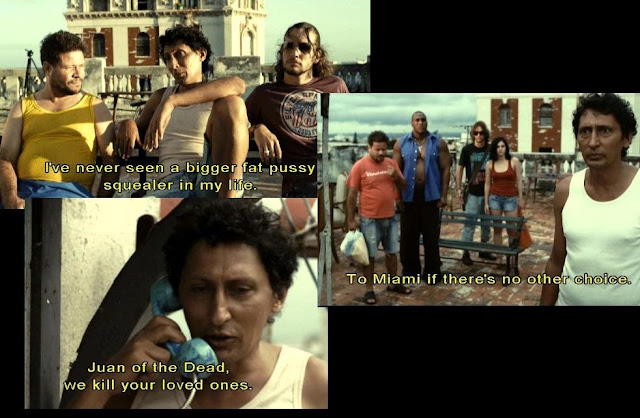 I will be the first to admit that parodying the name “Dawn of the Dead” to create “Shaun of the Dead” was fairly clever.  But adding a Spanish flare to it with “Juan of the Dead” seems, well, less clever, less original.  But let’s not let that take away from the potential here.  They are clearly letting the audience know that it should be, once again, a ZOMEDY, but that there is an equal nod to both Romero-esque films as much as there is to the newer classics like “Shaun”.  Now that I say it like that, the title fucking rules.  Starkwell and Lovelock are a typically hard sell on Zombie Comedies.  They have to really work and have good character and story.  Let’s see how they fare here.

[Two Cuban slackers out for a leisurely fish, they talk about fleeing , and end up with a convict zombie on their line, they harpoon his head.]

[Lovelock was silently weeping at the POTENTIAL in front of him.]

Juan and his sidekick seem to be real pieces of work.  The comedy is right on target.  Juan tries to reconnect with his estranged daughter but is shot down.  Similarities to this film’s British counterpart are subtle, but kind of present.  Nonetheless, this film is one hundred percent its own thing, and totally insane, so far.  The zombie outbreak has already begun.

[Juan goes to see his neighbor the old lay, and her husband is a zombie, he attacks Juan… so Lazaro and his son come to help and they accidentally harpoon both the old woman and the old man zombie.  Then they keep stabbing and maiming the old man in an attempt to get him to stop attacking.  Eventually… HEAD SHOT.]

Starkwell: Even these screwballs have learned faster than most do in these situations.

Lovelock: I love how indifferent they are about everything.  That’s really something to aspire to.

The action and mayhem gets crazier and funnier.  Sure, this is not re-inventing anything, but it’s doing the same old same old in a very refreshing and cool way, enough to make you forget that you’ve basically seen this film a thousand times.  Granted, you’ve never seen it in communist .

Starkwell: All this good stuff and you’re concerning yourself with that?

Lovelock: That is a top priority.  I’m looking for consistency here.

One thing is certain… the zombies look great, in that old-school sort of way.  No big computer crap going on here.

[Girl gets pulled into the water by a zombie, is dragged around like the girl at the beginning of “Jaws”.]

Starkwell: Ok… DUDE.  Zombies walking on the ocean floor?  “World War Z” THE BOOK style?  You have to get excited about that.

[Clearly excited, Lovelock peed a little and had to run to the washroom.]

Juan, Lazaro and his son, , start a ‘Ghostbusters’ style business, to kill zombies.  Lovelock did a jumpkick and farted simultaneously.  Starkwell liked the whole ‘capitalist adventure inside of a falling communist empire’ thing.  Lovelock was all “shut up nerd” and did another jump kick as Juan and friends recruit some locals to join their business.  Then they make a joke about how no one can explain why some are slow and some are fast.  Lovelock was so excited he started giggling uncontrollably.

Sometime after this, they stopped talking, mostly, and just sat there enjoying every second of the film.

Starkwell: We may have spoken too soon about the effects… that last shit was CGI and that looked horrendous.

Lovelock: I can forgive… I’m having too much fun to be angry.

Definitely light on actual story at this point, but that’s hardly a big deal, since the comedy and dialogue are great and the characters are very well developed.  The movie understands that a good zombie film ain’t about zombies.

[Juan and his Dead Busters are caught by some kind of military.]

Starkwell: Why did they make them take their clothes off?

Lovelock: I think we’re about to find out.

Lovelock: So… much… dude ass…

Lovelock: It's ALWAYS too much.

All through out there are nods to some classics.  There was a definite “Evil Dead 2” scene and the Father Jones character at the end was straight from “Dead Alive” even claiming he wants to “kick ass for the lord”.  Subtle enough that only a big fan will catch it, and it doesn’t come off as cheesy. Lovelock cried when Lazaro ALMOST died.  Turns out he wasn’t bitten after all and Lovelock and Starkwell HIGH FIVED! Hard.

[Juan and Lazaro go to center and decide it is time for a standoff.]

Lovelock: They made it.

In the end, Juan decides to stay behind, as his daughter and friends set sail for , because, he loves .  It’s all pretty ball crushing, and Lovelock started crying again.  Lovelock and Starkwell mostly just sang this thing’s praises all throughout.  Honestly, “Juan of the Dead” is a modern classic, the best of its kind in a very very long time, probably since its British father "Shaun".
Documented by Kev D. and Posted at 19:34