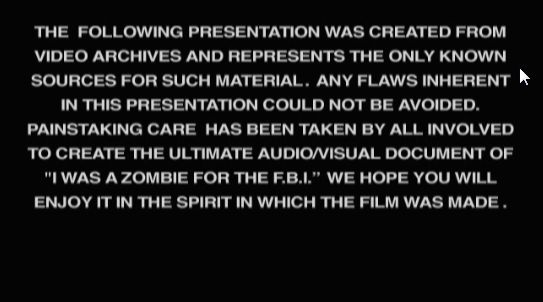 Writer / director of the film, Marius Penczner has only one other credit to his name, that I can gather.  “ZZ Top: Greatest Hits”.  So… Umm… where to begin?  Black and white, zombie comedy, early eighties… involving alien zombie infestations and the F.B.I.?  The potential is through the damn roof.  It just blew the roof right off.  But… potential don’t make a movie.  Unfortunately.  If I had a nickel for every “well it seemed good on paper” that I’ve shown Lovelock and Starkwell… well then I’d probably have more time and money to write.

[Two thieves, the Brazzo brothers are on a plane, destined for prison.]

Starkwell: Is the whole movie going to look this awful?

Lovelock: The town is called ‘Pleasantville’?

Starkwell: What in the Hell is this soundtrack?

The music is not only distracting, it’s irritating and is starting to stress everyone out.  Finally the music stops when the plane seemingly explodes.  But then more music starts up.  The FBI agent characters seem dumb as a post.  The Brazzo brothers wake up and seem to be held captive somewhere in a room.

[Or wait, they’re not being held captive… now they seem to be holding hostages in the UNI-COLA headquarters.  And there’s a magic ball that is making people go all zombie?]

Starkwell: What the… I give up. Plus I can’t handle the fucking soundtrack.  FUUUuuUUUUUCK this.

[Starkwell leaves… Lovelock isn’t any clearer on what’s going on, but he seems to be almost hypnotized by the irritating soundtrack.]

Lovelock: Either I missed “chapter two” or it jumped directly from one to three…  I’m not sure.  Maybe I just fell asleep at one point.

Lovelock: So the zombies look like humans and use a magic ball to make zombies and want the Brazzo brothers to steal them a soda recipe?

Lovelock: That’s like the sphere in “Phantasm” but without the gore or any of the FUCK YOU.

Puzzled by the music playing in the background, I decided to search the internet… APPARENTLY the original version didn’t have this shitty CONSTANT music playing.  It would appear the DVD release has been tampered with GEORGE LUCAS style.  The difference is that I don’t think anyone involved with the making of the film actually had anything to do with this shitty DVD release.  SO it's simply someone ruining someone else's already pretty fucking bad movie.  Why anyone would try and make an exceptionally low budget MORE unwatchable is totally beyond me.  Anyways, this movie is a piece of shit, borderline unwatchable, ESPECIALLY with the music and added visuals.  Lovelock hangs on until the end but has a look on his face THE WHOLE TIME like his nuts are being stepped on or that he is about to violently shit his pants.

It is mind boggling that anyone would take a movie from the eighties, release it on DVD while adding shitty generic late nineties drum machine garbage ALL THROUGHOUT THE WHOLE MOVIE. I can’t stress enough how bad this is.  If the music hadn’t been added to the DVD, this would be a boring, bad movie.  With the added music… it’s one of the hardest things to sit through EVER CREATED IN THE HISTORY OF MAN.

Lovelock: There’s a featurette about the NEW ADDED SOUNDS?

I showed this to Lovelock and he simultaneously punched a hole in the wall and shit his pants.  The DVD Producers really thought they were making something great here.  Baffling.
Documented by Kev D. and Posted at 09:26