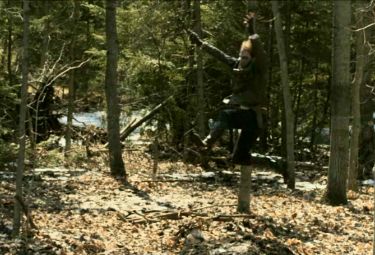 Along with “Ghost Brigade” and “Abraham Lincoln Vs. The Zombies”, this is the THIRD Civil War zombie film that Starkwell and Lovelock have had the opportunity (or misfortune… so far anyways) to watch.  Let’s hope third time is the charm.  Well, Brian Cox is in this one.  So that’s something.  But then again, Martin Sheen was technically in “Ghost Brigade” so… yeah… I should mention that this came from Redbox… Redbox has a bad record with Starkwell and Lovelock.

Starkwell: Well, I will say this, his voice already makes it cooler than most movies.

[Battle scene… WITH ZOMBIE SOLDIERS.  Brian Cox is narrating, in the first person, the story of his ancestor (?) fighting the outbreak after the war.]

Starkwell:  I hate to say this, but Redbox has given something that, so far, looks promising.

Lovelock: They had me at ZOMBIE.

They’re clearly going the DRAMA root… which is usually the easiest way for a lower budget movie to fail miserably, because good acting and writing don’t come cheap.  But, so far, it seems reasonably intense and not overflowing with cheese.  Brian Cox has certainly been helping achieve this balance, so far.  As Lovelock stated, “the zombies help”.

Lovelock: Looks like a National Film Board of Canada cartoon.

[Then they spent ten minutes trying to remember the theme for the logdriver cartoon, before eventually Googling it.]

The main character, Edward Young, is kind of a bad ass.  Starkwell has said he is willing to overlook the fact that he dresses like a video game character.  For now.

Lovelock: He’s got the whole world… in his hands…

Edward Young decides he’s going to go find his happy place, a waterfall, and spread his son’s ashes there.  Then he kills his horse, since it got infected, and Lovelock started crying.

Starkwell: Did Issac tell him he should draw some titties?

Lovelock: When times are tough, titties can help.  Especially if they are realistically drawn.

There’s an evil surgeon, played by STEPHEN MCHATTIE.  When they first introduce him and show him on screen, Lovelock nearly shit himself.

Lovelock: Oh man, I can’t wait to see McHattie.  I bet he’ll be all crazy and awesome and crazy awesome.

The rebels capture Edward Young while Isaac is off taking a piss, and they bring Edward to their prison.  Lovelock repeated his “Isaac sucks” sentiment.

[McHattie performs experiments as the rebels try to find a cure.]

Lovelock: The rebels don’t seem so bad… they want a cure!

Lovelock: Maybe they’re just taking the girl to their leader for a game of parcheesy?

[Isaac shows up and saves the day.]

Edward Young, Isaac and Isaac’s wife escape the rebels.  Edward is shot in the process.  Isaac and wife drag Edward and take him to see the old village cat lady / witch / hermit, named Eve.  Starkwell and Lovelock are pretty well on the edge of their seats.  Solid stuff so far.  A bit slow at times, but fun. Witch helps Edward, and he seems to be doing better.

[Turns out the witch thinks she started all of this with a spell that she cast out of anger for her witch sister being hung.]

Lovelock: That’s why I never participate in witch hunts.

Lovelock: Well also, because once you join one mob, all the other mobs start expecting you to show up.  And I don’t have time for that.  It's like, NO I don't feel like hunting down Captain Werewolf tonight... OK?

The movie definitely starts to drag a little.  We just crossed the hour and a half mark, which is usually where such films end.  So Starkwell and Lovelock are not accustomed to continuing paying attention after that milestone, and they start to get a little restless.

[Isaac and wife are RE-captured by the rebels and brought to the prison while Edward is off going to his happy place waterfall.]

[Edward Young puts on face paint and pretends to be a zombie, and starts summoning the horde of zombies to follow him.]

Lovelock: Ok, this just got cool again.  The face paint and robe is SOOooo Funeral Doom.

[Edward goes and rescues the prisoners from the prison and Isaac dies.]

Lovelock: FINALLY, now Emma can just be with Edward already.

Starkwell: Harsh.  Also, since when do you enjoy a good love triangle?

Lovelock: Dude, whatever.  Check out his face paint.  And did you see him jump over that booby trap?  FUUUuuuuuuuck YEAH.

Anyways, Edward Young kills the rebels and ends up getting the girl.  RIGHTEOUS!  Exit Starkwell and Lovelock.
Documented by Kev D. and Posted at 08:04