Day of the Dead. 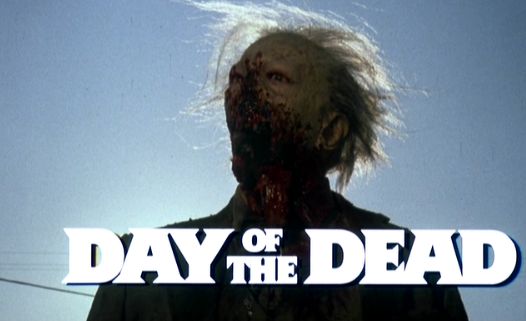 The third film in Romero’s series of ‘dead’ movies is often overlooked.  Not generally considered to be as groundbreaking as ‘night’ or ‘dawn’, “Day of the Dead” is not without its original ideas and wonderfully horrifying scenes of gore, human misery, despair and ugliness.  Also, in its own way, it was kind of fucking groundbreaking too.  The film opens with Sarah and her crew of super friends exploring an abandoned city in a helicopter.  They yell out with a bullhorn asking if anyone can hear them.

[Zombies wake up all over town and start heading towards the soldiers and their helicopters.]

Lovelock: In five minutes, this film already surpasses SO MANY others.

Starkwell: Tom Savini FOR THE WIN.

[They head back to their underground base.  Soldier Boy Miguel is STRESSED.]

Lovelock: I’d keep an eye on that Miguel.

It’s clear that the troops are getting restless.  Miguel looks like he’s about to hang himself and Helicopter Pilot John wants to go find an island somewhere and party until the world ends.  As soon as they get back two meathead soldiers take Sarah and Miguel on a mission to round up a couple more zombies for Mad Scientist Logan’s experiments.  Miguel fucks up, so then he gets even more crazy and strung out.

[Miguel slaps Sarah in the face.]

Lovelock: Best line ever – “You made me feel like a piece of shit.”

Starkwell: If I had a nickel for every time I said that to a lady…

Anyways, I usually have more fun documenting Starkwell and Lovelock’s conversations when they are ridiculing the movie.  For the next little while, they seemed to only have nice things to say.  There were even some high fives administered.  We see Bub for the first time and they’re all “AW YEAH” and so on.  As the movie starts playing out, it becomes clear that the military dudes there to defend and protect the scientists don’t want to defend and protect anymore. They don’t approve of Dr. Logan’s hippy dippy ‘can’t we all get along’ plan with the zombies.

[The soldiers start acting like real hard-ons, even pulling guns on the scientists.]

Starkwell: Why is the pilot smiling?  They’re threatening him too…

Lovelock: On an unrelated note, where is Sarah getting all that make-up?

Starkwell: Sometimes, you surprise me.

Sarah kicks Miguel out of her room, due to his increased instability and, likely, her huge decrease in EVER wanting to bone him again.  So she goes and joins Pilot John and McDermott in their trailer to get drunk.  As Dr. Logan talks up his theories and the soldiers are seen fighting one another and acting all crazy, Starkwell has been making the usual “in this life, who are the real monsters?” type of comments.

[Sarah is introduced to Bub.]

Starkwell: Shut up, ’s training him!

Starkwell: He’s literally a blueprint for every actor who’s ever played a zombie since.

Romero explored this even further in “Land of the Dead”, but before Lovelock and Starkwell could really discuss any further, all Hell started breaking loose, Miguel was bitten along with another one of the soldiers.  Sarah amputated Miguel’s bite area and is planning on keeping him alive… Rhodes and his Goon Squad flip the fuck out, and tell her, basically, ‘fuck this shit, good luck without us’.

[Rhodes and Goon Squad find out that has been feeding Bub dead soldiers.]

Lovelock: There it is.  See… Bub is toxic.  Nobody likes him!

kills another scientist in cold blood, and then tries to convince John to take Rhodes and Goon Squad away from this place in the whirlybird.  Sarah and McDermott are thrown into the tunnels where all the zombies are and have to fend for themselves.  There are plenty of scares, good kills, Lovelock’s nervous farts and Starkwell talking about “who the real monsters are”.

Lovelock: Well, I’ve found the part of this movie I don’t fucking like.

[Soldier gets ripped apart in one of the most impressive gore shots ever.]

Lovelock: Tom Savini is the real star of this film.

After a bunch more sweet kills and a soldier blowing his own brains out, Bub chases after with a gun, shooting at him… successfully.  I guess because killed his master (?).   is shot and then torn apart by a bajillion zombies.  Lovelock wanted to be mad about the whole ‘Bub King of the Zombies with gun abilities and learned behavior’ thing going on, but was far too happy about Tom Savini’s brilliant mayhem on display.  Also Starkwell told him he was missing the point.  And then, it actually ends on a happy note, with Sarah waking up on an island paradise with John and McDermott fishing on the beach.  Nice.
Documented by Kev D. and Posted at 08:48