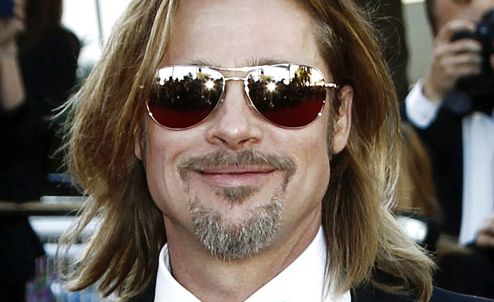 Burt Malone just sent me this lengthy email after seeing this weekend’s blockbuster zombie film, “World War Z”, and I figured it was a nice opportunity to give Lovelock and Starkwell some time off to recover.

If you’ve read the book you know that Max Brooks is all about the slowburn of the Romero-style shuffling zombie.  Within the first five minutes of the movie, it’s pretty clear that they threw that out the window along with Max Brooks’ blessing and probably a shitload of initial drafts of the script.

Guess what?  I can respect that.  I can respect originality.  But when you change something that is overtly stated by the source material’s author as WHAT A ZOMBIE IS, it’s insanely disrespectful, to both the author and to fans of the book.  So maybe you should consider changing the title, or something.  Fast moving, non-flesh-eating, collective consciousness (?) zombies that sound like velociraptors, react to sound like the T-Rex in "Jurassic Park" and have disease-detecting eyes ARE NOT WHAT MAX BROOKS FUCKING HAD IN MIND.  The zombies bite, but don't eat people?  Huh?

When Peter Jackson made “Lord the Rings” into a movie, he didn’t decide “hey, why don’t we give the hobbits shiny wings and flying abilities and make Gandalf a cyborg”.  You know why he didn’t decide that?  Because he is not a piece of shit, that’s why.

“Maybe the dwarves should be way tall and the elves can shoot fireballs from their assholes.”

If you’ve read this book, you know that there’s no way to make it into a movie anyways.  I mean, how do you turn a large chunk of kind of unrelated documented events into a chronological film with characters?  You can’t, and you shouldn’t even try.  The actual “World War Z” as it exists in the book would be a war that would take hours and hours of screen time to develop.  It would have to be a mini-series or a TV show.  And in an era where, again, there is already a popular TV show essentially showing EXACTLY that, what would be the point in making another one?

Well, Brad Pitt would be in it, so I suppose people would still watch it.

So how do you take an outbreak and ‘war’ that would take dozens of hours to show properly, and somehow squeeze it into two hours?

FAST FORWARD EVERYTHING.  And I mean everything.  The world dies OVERNIGHT.

To be honest, the lack of character development doesn't stop me from liking Brad Pitt's character (as well as some of the side peoples), which is actually frustrating, because it just keeps reminding me how much better it could have been had the writers not been so lazy (or if they had at least read the book).  Considering the book is ENTIRELY made up of people telling horror stories of the great zombie war, you’d think that this film might at least try to have at least one scene wherein someone talks about how they lost their family or whatever (there is one scene where a guy mentions he lost his wife and kids, but it's not exactly a detailed story, more like "I lost my wife and kid").  But then I realize why that couldn’t happen in this movie.  With these ‘human tidal wave’ zombies, you can’t really witness anything and get away to tell stories about it.

If you see them, then you’re probably already dead.

So how did that guy manage to see his wife and kid die and get away?  And how did that Thomas kid get out of the apartment with a gun (spoiler alert (?) ) and manage to get up the stairs and save the day?

There’s a montage shown in the last five minutes that speaks of (and kind of shows) epic ‘humans versus zombies’ battles, that at least SOMEWHAT resembles some of what is documented in the book.  So… the events in this movie take place before anything documented in the book?  Well, now I’m just more confused.  And in the end, we still have no answers.  We don’t even know whether or not humanity is going to make it. That would be fine ordinarily in a zombie film, except that, in the book (that this is supposedly based on), WE DID MAKE IT.  The whole book is after the zombie war ended.

Now.  Having said all of that.  I still enjoyed the shit out of this movie.

But... any merit that there is herein, and anyone else out there that enjoyed it, isn’t going to be able to save it from the barrage of pissed off fans of the book that will tear this thing a new asshole for being NOTHING like the source material.  Or critics expecting character development or emotion.  Or people wanting to see Romero zombies.  Really, that’s a shame, because there are some good ideas sprinkled around in here.  Like I said, lots of potential, which only makes watching it even more frustrating.

It's like taking all of the ingredients needed to make a delicious cake, but then instead making an omelette and not telling anyone where you hid the fucking cocoa powder.

It just needed to develop its characters more, develop some of its ideas a little more, and, obviously, NOT be called “World War Z”.  Because, guess what?  This isn’t “World War Z”.  It’s just a pretty good popcorn movie, which is still way more than I can say about a lot of modern day blockbusters.

That's it.  I ate too much popcorn and need to go have a good sit.

Burt ain’t exactly a Zack Snyder fan, although he did mention to me that even his 're-imagination' of Romero’s "Dawn" was nothing even close to the TOTAL obliteration of the source material that “World War Z” was.  And the Oscar for "least like the book" goes to...
Documented by Kev D. and Posted at 20:52