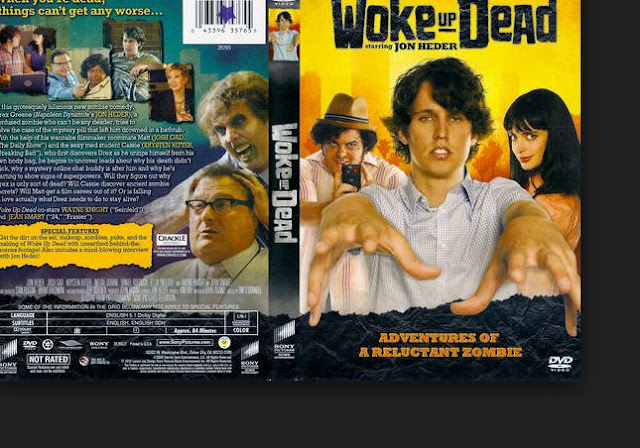 This is a web-series that was crammed all together to become one roughly ninety minute long movie.  Oh and Napoleon Dynamite is in it.  And he plays a zombie.  But don’t worry, it’s not the flesh eating kind.  It’s more like the “wait, I’m a zombie?” kind.  This has potential on paper, but the 3 to 7 minute episodes being strung together might make for a weird schizophrenic look and feel and flow.  We’ll see.  The creator/writer has a bit of an eclectic resume.  Everything from “Another 48 Hours” to “Firestorm: Last Stand at ”.  Yeah.

[The movie opens up with Napoleon getting hit by a bus, and then waking up in the morgue and talking to Morgue Girl.]

Starkwell: His friend looks like the poor man’s Jack Black.

So we follow the story as dead Napoleon tries to convince his friend that he’s not actually dead.  And his friend keeps filming him and is all excited to document the living dead on his blog or something.

[Napoleon and Fake Jack Black recruit Morgue Girl to try and figure out what’s wrong with him.]

[Napoleon needs money, so he sets out to get a job.]

Lovelock: Wait, how does he decide that he needs to get a job, and then somehow already have a job in the morning at a huge corporation?

Starkwell: In this economy? That’s offensive to all the unemployed out there.

A lot of the jokes don’t work.  Some do, but they are sandwiched in between a lot of stale jokes about office work and gibberish about workin’ and the grind.  And then there’s a scene where Fake Jack Black feeds zombie Napoleon brains.  That part of it was kind of lame, but Fake Jack Black is starting to grow on Starkwell and Lovelock.

Starkwell: Is it just me, or is Napoleon not a very good actor?

Lovelock: It is not just you.

So Zombie Napoleon continues denying that he is a dead man, and the plot thickens as we find out that it’s some kind experimental mystery drug gone wrong (or right).  Is it ARMY?  Is it PHARMACEUTICAL? Is it MAGIC?  I guess we’ll find out.

Starkwell: For a film cut from three or four minute segments, it’s a touch slow moving.

Lovelock: What? I wasn’t listening.  I was busy staring at the floor.

Starkwell: If you know ANYTHING about computers and programmng, you’d know that the “application” he is using is a half-assedly built Windows Form that is still in like, edit mode.

Fake Jack Black continues to film his documentary and put it up on the web.  There was a shot at one point of two of the characters watching “Zombie Nightmare”.  Nice touch.  Lovelock said something like “at least they respect the genre... but not enough to be any good or original”.  Then they dropped some Romero references, and those, as Starkwell said, “felt forced”.  Zombie Napoleon meets another Zombie.  It’s a “hot” blonde girl.  So now Zombie Napoleon finds out he is able to heal super fast, move super fast (there's even a REALLY dated "Matrix" parody where he dodges bullets... talk about STALE), and starts some kind of secret love affair with Blonde Zombie (equally lame).

Lovelock: So… we’ll never know what the Hell was going on?

Starkwell: I guess you can only produce so many bad web shorts before people tell you to PLEASE STOP.

Remember when I said "I guess we'll find out"?  I was wrong.  Nothing is explained.  It ends in the middle of the story, and, since they never continued the thing, I assume that means the story was never finished.  It definitely loses points for that.  Ugh.  Now they’re really mad at me and want their hour and twenty-something minutes back
Documented by Kev D. and Posted at 08:53