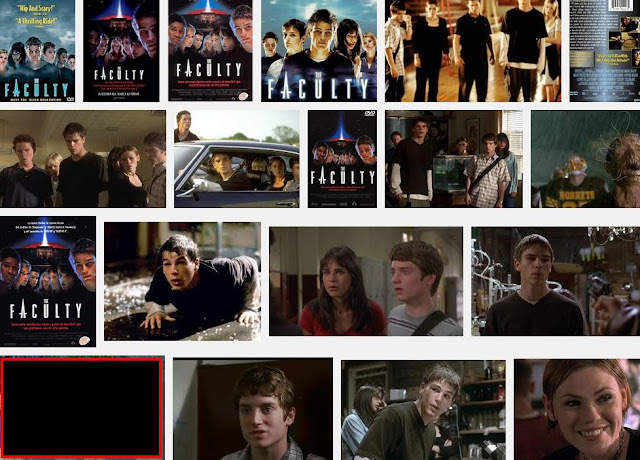 Robert Rodriguez’ resume is a bit of a mixed bag.  I’m not sure which side of the mix the late nineties’ “Faculty” ends up.  But the movie opens up an 'Offspring' song that dates the film IMMEDIATELY.  Anyways, this should be fun.  The film starts off introducing us to the high school, the kids, the faculty and the town, where apparently football is a big deal.

[Football Coach, played by Robert Patrick, seems possessed.  He drives a pencil through the principal’s hand.]

Lovelock: Are we sure he’s possessed?  I mean, Patrick is pretty evil.  And he’s a football coach.  They’re notoriously asshole-ish too, no?

Starkwell: Ummm… Coach Taylor in "Friday Night Lights" is an honorable and good man, and I would like to have the second part of your comment stricken from the record.

Lovelock:  What about the Robert Patrick thing?

Anyways, Coach and the Drama teacher team up and kill the Principal.  Decent cast, a lot of recognizable faces.  Granted they are really young.  Elijah Wood, Salma Hayek, Famke… is that Jon Stewart?  Lovelock is mostly just making 'Frodo' jokes, so I won’t bother writing those out.

Lovelock: Is that Usher?

So apparently Elijah Wood found some wormy thing on the field, which is some kind of unknown species that has the ability to CLONE stuff. They put it in an aquarium and were on their merry way.  Elijah Wood and Delila figure out what’s going on.  It seems that the whole faculty is infected.

Lovelock: I guess being possessed isn't all bad!  He flew through all the steps like THAT.

There’s a scene where Elijah Wood and another character discuss scienc fiction at great lengths, and they name drop like ten or so movies and writers. It all feels pretty forced, according to Starkwell.  After this conversation, they figure it out.

[Zeke the Drugdealer Bad Boy, played by Josh Hartnett and I guess one of the good guys, stabs Posessed Jon Stewart with his homemade drug syringe, and Jon starts oozing foam and dies.]

Starkwell: Wait, that high school student has a secret laboratory?

Lovelock: Am I the only one who realizes that caffeine is the secret here?

[They decide they need to find the ‘leader’ and take him/her down.]

Starkwell: If one of them ends up being the leader, it would be pretty weak.

[Delila is one of them.]

Starkwell: Well that’s stupid, why would she have been helping them, get away all this time?

Lovelock: You could park a jumbo jet in that plot hole.

Starkwell: Also, why do they need Zeke's wonderdrug?  Just go get caffeine pills.

Then there’s a football montage and some more of the cheesiest, most dated late nineties alt rock soundtrack.  In the midst of all this, they lose another guy, former quarterback guy.

Lovelock: If the Coach is the head alien, wouldn’t it have made sense, thematically, to develop the relationship more between him and the ex-Quarterback… and then NOT make the quarterback an alien?

Starkwell: We don’t know if Coach is the Queen.

[TWIST: New Girl is the Queen after all.]

Starkwell: Well that twist just doesn’t make any sense at all.  Why?  Why wouldn’t she have just killed them WAY EARLIER?  Aw come on, Rodriguez.

Lovelock: Well at least we get to see her boobies.  Thanks for that, at least, Rodriguez.

Starkwell: He’s just using boobies to distract us from the huge holes in the plot.

He tries to explain why the new girl hung out with them for a while instead of just infecting them, but it’s pretty thin.  You suspect from the moment you first see her on screen, so the fact that it ends up being her could be surprising in how obvious it is, I guess…  After they kill the head alien, everything goes back to normal and EVERYONE GETS THE GIRL.  Jon Stewart is still dead.
Documented by Kev D. and Posted at 08:54