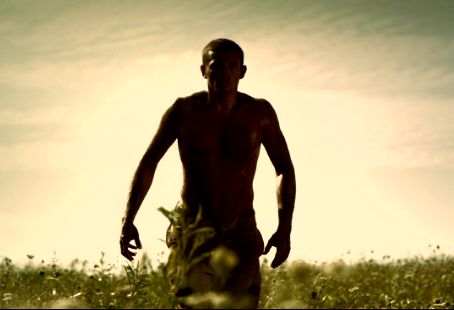 Redbox, we’ve had some rough ventures together, haven’t we?  This may or may not be another one.  The brothers that made the film seem new to the scene according to INTERNET, so you never know, they could be up-and-comers, or they could be PLEASE STOP NOWers.

[Film starts with people hunkered down in a basement or something and then flashes back to four days earlier.]

Starkwell: Soundtrack is good so far.

So far it seems like the Clay brothers have the right idea.  When you have a small budget, write a movie that you can actually make, not one that you can barely fake.  It seems slow moving, but they are building tension quite well.  Right now the main character Jim is hanging around an old farmhouse alone, trying to figure out and make sense of what is going on, as the news reports show explosions and chaos.

[Jim hears a noise, gets spooked, chases down the noise, IT’S A CAT!]

Starkwell: Just a cat!  If I had a nickel for every time that happens…

Lovelock: I’d have a shitload of nickels.

Then we see the first zombie, they look and act like the "28 Days Later" rabid infected zombies, complete with red eyes.  It’s a bit derivative, but Starkwell and Lovelock are willing to forgive the film, because, honestly, it’s actually pretty effective at THRILLING US.  Jim is contacted by a nearby group who saw his barn lights on.  He decides to meet up with them in an office building or airplane hangar or tobacco warehouse of some kind.  He meets Scott, Scott’s wife and a girl named Ivy, or Amy, or Booby… not sure, I’m sure they’ll say it again.  Oh ok... it’s Alex, but people call her Ix.  Yeah.

[It’s apparently all because of CHEMICAL WARFARE gone wrong.  Or gone right, depending on how you want to look at it, and who's side you are on.]

Lovelock: We’re past the halfway mark, and we’ve seen one zombie and NOTHING HAPPEN EVER.

Starkwell: Well, at least the dialogue is decent, the characters are cool enough and the acting doesn’t completely suck.

Lovelock: If you take a few good ingredients you still need to have a recipe plan to make a cake, and not just a boring soup of competent ingredients.

Lovelock’s right.  This shit is painfully slow. It feels like they slowed down the speed.  Everyone talks like that turtle in the Looney Tunes cartoons.

[The zombies aren’t quite "28 Days Later" after all.  They are when they are raging mad, but under other circumstances, they seem to be more like infected people in "The Crazies" or "Grapes of Death".]

Starkwell: Yeah that's what it is.

Whatever it is, Jim put a hatchet into a zombie head, Scott started acting like an asshole, and Lovelock was all “Awww man, more of this and less of the touchy feely shit.”

[Jim goes out to get supplies from some kind of AIRDROP that a passing helicopter dropped.]

Lovelock: That rivals the “Cannibal the Musical” headshot.

Then ARMY show up and take them captive, do tests on them and eventually decide that they are free to go.  It’s basically a coming of age story, for the quarter life crisis sufferers of the world.  And the real curveball here is that it has a happy ending.  It’s a seriously unexpected twist, and a welcome one.
Documented by Kev D. and Posted at 08:12