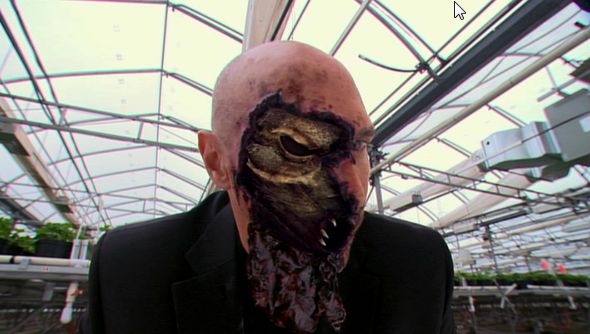 This was a made for TV production from the later part of last decade.  It stars Judd Nelson and was filmed in .  The film is SET in .  So it literally brings together the two towns that Starkwell and Lovelock have called home.  They can’t wait to see if they can recognize some locations.  This will, at the very least, keep them occupied if the film ends up fully sucking.  I should note, that the director seems to have, other than this film, mostly directed children’s programs such as “iCarly”.  The film starts up quickly, some Pharma company is selling everyone in ‘clean’ water after the Boston Plague has infected a buttload of people.  The story starts off focused on some people searching for proof that the Pharma company is crooked.

[Cop named tells a reporter about the conspiracy, that involves city officials and the Pharma company, then goes and assassinates the mayor and grabs a blood sample.]

Starkwell: Wait is he… infected… or an alien… or has the plague… or?

Lovelock: I recognize that guy!  He was in local commercials and shit.

Anyways, there’s a bunch of action, and eventually we see what the aliens look like under the human skin, and then the alien eats a girl, zombie style.  Lovelock cheered.  Starkwell was all “WTF”.  I guess the reporter, Lisa Wallace, is the main character along with her former boyfriend, other reporter, named Ben.

[ gives Ben the Mayor’s black blood sample to give to Lisa, and then dies.]

Lovelock: I smell a love triangle.

Starkwell: There are only two people… it’s not a triangle.  It’s just a line.

It’s a decent story, but it’s dragging a bit.  I believe Lovelock said more than once “someone turn alien, someone eat someone, someone do something, someone what the fuck something”.

[Lisa’s boss tries to kill Lisa and Ben with her weird insect arms that came out of her stomach, and then Judd Nelson saves the day.  Turns out he is one of the aliens.]

Starkwell: Well yeah he's an ALIEN, but the other aliens talk normally.

Lovelock: The aliens can talk how ever they want, as long as they start eating people.

For a little while they made fun of how OBVIOUS it was that it was , and yet they are calling it .

Starkwell: Why not just say it’s ?  Why say , but then show skylines?  It’s not like it HAS to be for this thin plot to hold.

[They even show bridges leading onto an island.  I mean, COME ON.]

Starkwell: If you like Geography then you’ll love NOT THIS MOVIE.

Lovelock: All they need to do next is show French road signs and shit, and really take their overall geographical disregard up a notch.

[Then the villain referenced .]

[So Ben is apparently the cure for the Boston Plague.  The worms that possess people die if they are in contact with him.]

Lovelock: What are the odds that a gutsy reporter would be the cure?

[Then he started laughing and left.]

After a fist fight with a giant ant and a couple of ‘splosions, the film resolves itself in a stupid way that doesn’t really make sense and is not worth talking about.  Well, at least they showed a helicopter shot of actual .
Documented by Kev D. and Posted at 20:48