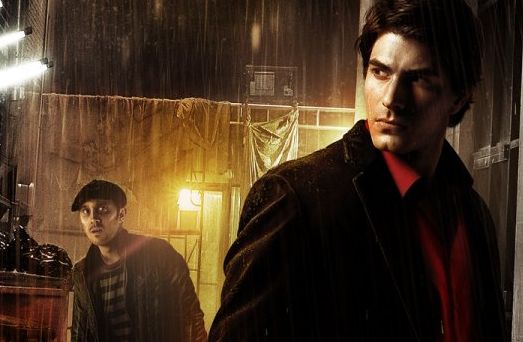 “Dylan Dog” is based loosely on a comic book and received pretty horrendous reviews from fans of the original comic.  It’s about a private eye with some serious ability, that battles with supernatural beings.  Also he apparently has a zombie sidekick.  There’s a slight connection to the mid nineties masterpiece “Cemetery Man” in that it is based on the same series.  The difference is that the screenplay for “Cemetery Man” was actually written by the author of the comic, whereas this one is written by the team that wrote “” and the “Conan” remake.  Sigh.  Anyways, since no one here has ever read the comic, that’s not something that we are taking into consideration here.

[Dylan tells us that he quit the ‘undead protection’ business, but quit because his heart was broken.]

Lovelock: If I knew about undead creatures, I don’t think I could just ignore them.

Starkwell: Considering the movie opened up with a werewolf eating a dude, I think we know he won’t ignore them for long.

Then we are introduced to Dylan.  He’s charismatic as hell and his assistant Marcus seems cool too.  Thus far, accuracy to the comic or not…seems cool.  The daughter of Werewolf Victim tries to hire Dylan and take him out of retirement.  He refuses and his assistant Marcus is confused and pissed.  I don’t think Marcus knows about his past.  Then we are introduced to a VAMPIRE dance club full of drug dealing vampires.  I guess vampires are bad.  Why do vampires always dance at clubs?

Starkwell: Accuracy to the comic book or not, the important thing for a good movie is to have characters you like.  CHECK.

[Dylan comes out of retirement.]

Lovelock: I’ll get over Marcus.  This is so cool.

So far, it’s a classic Private Eye picture, except you know, where he’s chasing down werewolf clans and talking about drug dealing vampires.  Fun stuff.

Lovelock: Werewolves?  Vampires?  Clan fights?  If I wanted to vomit I’d watch “Twilight”.  Where are the fucking zombies!?

As Dylan continued his investigations and had fights with vampires and explained the magics of the world to Elizabeth (daughter of Werewolf Attack Victim).

Lovelock: Lucky for us he has someone he needs to explain this shit to.

Dylan goes to find Marcus at the morgue.  Dylan meets his zombie friends there, and then Marcus wakes up!  So Marcus wasn’t killed by the werewolf, rather, he was bitten by a zombie.  It turns out that there are different types of zombies.  The flesh eating kind are all muscular and crazy.  The non flesh eaters mostly just act normal and look kinda gross.  Lovelock played air guitar for the next ten minutes.

[Dylan explains Marcus how he needs to survive as a zombie.]

Lovelock: I really hope they don’t show him eating those maggots…

Starkwell and Lovelock really didn’t say much.  They just sat, genuinely interested in the movie, captivated and on the edge of their seats.  Marcus is a great comic relief zombie, and when they do finally see one of the huge flesh eating types of Lovelock jumps out of his seat and plays air guitar for a whole other ten minutes.  There are some twists, turns, scares and laughs, and Dylan eventually gets to the bottom of it and there’s a happy ending.  Marcus, much to his chagrin, is still a zombie though. It’s not without its problems, but overall, this is certainly not a terrible film.
Documented by Kev D. and Posted at 19:16