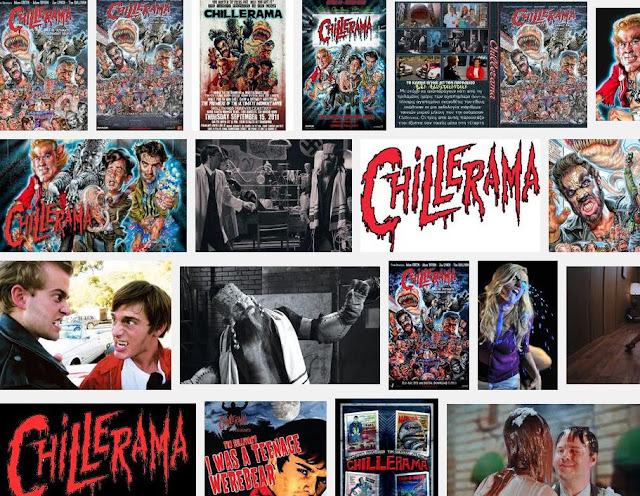 Zombies are obviously a huge fad at the moment.  A smaller fad that has popped back up in the horror industry is the 'anthology' picture.  Most, if not all, that we have watched thus far have failed to ever capture the magic of “Tales From the Crypt” or even “Creepshow”.  “Chillerama” was one that was well received, and features five directors, one for each segment.  The bad news is, only one of them contains zombies (and it turns out to be the central story that plays in between the other segments).  The worse news, the whole film is two hours long.  I smell a fast forward request around the corner.

[Guy digs up his dead wife and tries to rape her corpse in the graveyard.]

[Wife re-animates bites off his balls.]

Starkwell: Why did they have to show his nutsack?

Lovelock: Why is his blood blue?

[Guy walks away and goes past a drive-thru, and it shifts focus on the attendees therein.]

Starkwell: Oh I get it… he had blue balls.

Lovelock: I must say, I opening it up with a shot of a hairy nutsack being gobbled is… umm… BALLSY.

Gobbled-Up Ballsack Man works at the drive-in theater, and I guess the drive-in is going to be what we see for the ‘segue’ sequences in between segments.  Some faces are recognizable, it’s not entirely filled with amateurs, and so far it seems quite competently made.  The acting and dialogue are decent, but I have to admit, Starkwell is having issues with the subject matter already.

[First segment is about a guy who takes a fertility drug and ends up with gigantic sperm.]

Starkwell: Yeah, I don’t know about that.

[Doctor tells him to jerk off whenever he is aroused, so he does so in the bathroom of his date, right when he shows up at her house, but the sperm he releases continues to grow, has teeth and tries to burrow up the date’s crotch.]

Starkwell: Dude, it’s like it was written by stoned fifteen year olds.

Lovelock: Not quite there...

So the sperm gets away, keeps growing and starts eating people.  And then it really gets ridiculous.

[Giant sperm looks at statue of liberty and sees her shaking her ass and bare breast.]

Lovelock: So many innuendoes… SO FUCKING LAME.

Off to a rough start.  This makes Troma movies look mature.  It’s too bad, because it is relatively well made in terms of its look and feel.  No seriously, it’s well filmed and looks really cool.  It’s just that, we’re only one segment in and we’ve seen dudes beating off three times, and now, in between all of the lame and predictable sex jokes, we’re being treated to a lame musical number.  I guess they’re parodying beach movies in this next segment.

Starkwell: Alright, I get what they’re doing here.  I get the homage that they are going for.  Very clever, now can we fast forward?

Seriously, it’s a shame because there are some good ideas here.  But they KEEP covering those ideas in dick jokes.  Also, in the beach party movie... gay jokes?  Then in the next segue they bring in the big guns.  FART JOKES!  Starkwell just keeps getting more and more angry.   The next segment is “The Diary of Anne Frankenstein”.  It involves Hitler reviving a dead Rabbi who comes back to life and starts killing Nazis.

Starkwell:  I think these film makers REALLY want to be EDGY.

Lovelock: I just don’t think they know where the edge is.

Starkwell: Their edge is probably covered in dick and fart jokes.

So Lovelock and Starkwell are finally realizing that the zombie segment is actually just the stuff that they are showing in between the other segments.  Apparently the blue blood semen mixture that ended up in the popcorn is turning everyone into flesheaters.  The final segment called “Deathication” is one long fart and shit joke.  And there are a lot of boobies.  Starkwell gets up and leaves.

Lovelock: Actually, it’s kind of getting to the point where the shit joke is beaten so badly that it’s actually starting to really be funny.

Starkwell left just in time.  Once “Deathication” ended, it cut back to the drive-in and it was one long montage of people butt blasting one another and eating each other while butt blasting each other and people jerking off and so on and so forth.  Then they showed a girl pulling out her husband’s cock and ripping it off while spraying her husband with blue breast milk… in front of their baby, which they then ate.  It sounds even worse than it is.

Lovelock: This is like those action movies, where the film makers think if they just show shit blowing up for two hours that it’s EVEN better than actually trying to write a fucking story.

[All killer, no filler?  What a bunch of malarkey.]

Don’t get me wrong, it’s the best horror movie parody I’ve seen in a long time.  But that don’t mean shit, really.  The film makers clearly love movies, and a lot of the same movies I love.  Unfortunately, they seem to love dick-fart jokes, racial and and religious and sexual stereotypes, and boobies and shit even more.  The movie ended with the four filmmakers leaving a theater showing “Chillerama”, which they then made fun of.  Nice touch I guess. One guy was wearing a Newbury Comics shirt, which, admittedly, is pretty fucking cool.
Documented by Kev D. and Posted at 10:25