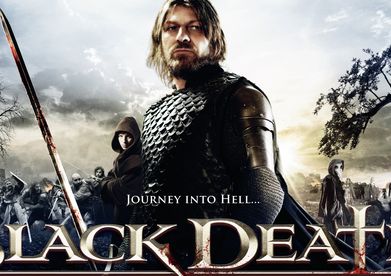 I don’t know a whole Hell of a lot about the recent film “Black Death”, but it has two things that I know of, already going for it.  The first is Sean Bean, and the second is director Christopher Smith who directed the somewhat unknown but quite awesome slasher film “Severance”.  With a dash of hope, Starkwell and Lovelock race into this one head first.  We are introduced to a monk at a monastery who is in a forbidden romance with some girl.  She leaves to hide from the plague, he stays, for some reason.

[Sean Bean is introduced, he’s a knight of some kind named Ulrich.]

Starkwell: Does he play a weasel in this one? He always plays a weasel.

Lovelock: It must kind of suck to have a face that everyone assumes is the face of a guy who is about to betray you.

Starkwell: There’s always work for someone who can play that part.

[The monk volunteers to go with the knights, head monk tells him that Bean is dangerous, he doesn’t trust him.]

[Turns out the monk volunteered to go on a hunt for NECROMANCERS!]

Lovelock: Bad news for Mr. Monk, GREAT news for us.

We are introduced to the crew he travels with.  Not exactly a band of merry men.  And Ulrich is MAD INTENSE.  Kind of scary too.  When one of the crew is infected, they straight up kill the shit out of him.  The journey presses on into unknown woods, on the quest for the necromancer village of cannibals and zombies.  Lovelock looks like a kid on Christmas Eve.

Lovelock: Are those zombies?

Starkwell: Why don’t you just watch.

Lovelock: I am watching!  Watching for zombies.

They find a village that they suspect is housing the necromancer, so they are apprehensive to let their guard down.  The village takes them in, but they seem a little TOO friendly.  Things seem really fishy.

[Monk finds his girl dead in the village, he also finds out who the necromancer is, it’s BLONDIE! Queen of the village!]

Lovelock: He should probably be concerned that she was the one who tended to his wounds earlier…

Starkwell: You can’t exactly use your head when you’re busy thinking with the ol’ wiener.

The Monk watches Blondie bring his Girl back to life during some weirdo ritual, then runs away, to warn the others.  Too late!  They were all drugged during the feast!  Now they are all held captive in some kind of cold bath / well / cage, and have begun being crucified, tortured, hanged, killed, etc.

Lovelock: We interrupt this broadcast to remind you all that Sean Bean is a wicked good actor.

[In an attempt to make Monk renounce his faith, they dangle his undead girlfriend in front of him, she does not appear to be herself.]

Lovelock: So it’s to be the confused type of zombie then…

Resisting temptation, Monk stabs his zombie girl, he does not renounce!  Then the torturing resumes.  Sadly, Ulrich is torn in four by two horses…but not before he releases black plague on the village.  Score one for pestilience!

Lovelock: So wait, everyone dies... ?

Starkwell: Wait, so everyone dies?

Osmond returns to the monastery with the one surviving member of the crew.  In the following years, Osmond essentially became Ulrich.  Ulrich on steroids!  He went around burning witches that were clearly not witches.  What a nutjob.  Starkwell and Lovelock gave the film a standing ovation.  Definitely light on zombie content, unless you count the plague itself as the outbreak, but a pretty sweet movie nonetheless.
Documented by Kev D. and Posted at 20:49