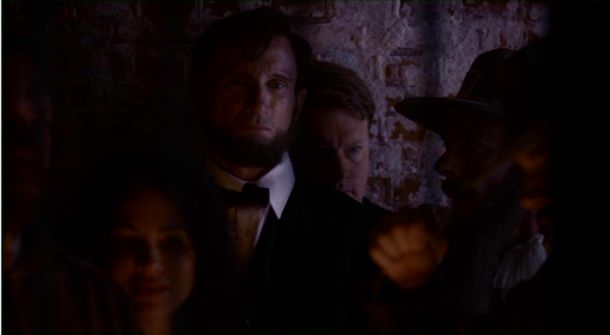 I pretty much have to launch a mockbuster from “The Asylum” at Starkwell and Lovelock from time to time just to keep them in check, and make sure they don’t lose their perspective on what bad really is and can be.  The amazing thing is just HOW MANY zombie movies “The Asylum” has been churning out lately.  This one promises to stand right alongside the others, in my garbage can, as soon as Starkwell and Lovelock decide that they’ve had enough.  If you watch all of the previews on one of “The Asylum”s DVDs, you’ll be SHOCKED at just how many blockbusters they manage to mock, sometimes within one movie.  And is that the father from “Family Matters”?

Lovelock: Was that a zombie or the girl from “The Exorcist”?

Starkwell: I’m sure they don’t even know.

Only about two minutes in, we quickly realize that the costumes, writing, acting, special effects, directing and EVERYTHING is horrendously cheap and way beyond sub par.  Maybe even by “Asylum” standards.

Lovelock: They could have at least made the doctor guy have SLIGHTLY less modern looking glasses.

Starkwell: Maybe try and not show the modern day gas meter on the side of that building either.

Lovelock: I never gave a damn 'bout the meter man, 'til i was the man who had to read the meters, man.

Starkwell: Maybe find actors that can grow an ACTUAL mustache and not need to paint one on.

Seriously even the MUSIC is mocking ACTUAL songs.  The movie trickles along as the president and his band of merry men fight zombies and confederate soldiers and zombie confederate soldiers.  They meet two girls with big honkin’ boobies and lots of make-up in an old farm house, and they bunker down.  Apaarently hooker number one is an old prostitute friend of Abe's.

Lovelock: Teddy Roosevelt kicks ass with that there shovel.

After one lame plot twist, most of the characters die, and a bunch more lame looking zombie kills are shown and the film ends.  I think it really reached the tipping point into the purest of cinematic shit when Lincoln zip-lined away from an exploding building as it exploded, and then emerged from the smoky ruins unharmed.  Or at least, it was at that point that Starkwell vomited.
Documented by Kev D. and Posted at 08:07