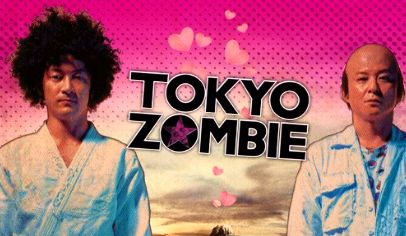 Based on a Manga comic of the same name, I guarantee that this will likely be one big incomprehensible pile of potential.  Whether or not this will go in the "awesome Japanese zombie movie" pile (Versus, Wild Zero…), or the "horrible the worst I hate it to death Japanese zombie movie" pile (Girls Swim Team, Stacy…) is entirely up to everyone's favorite "the Statler and Waldorf of zombie films".

[We are introduced to Fujio and Matsuo, factory workers, who train on their lunchbreak to be jiu-jitsu champs.]

Lovelock: I wish I could spar at work for fun.

[They kill their boss and decide to dump him in Black Fuji, the mountain sized garbage dump out at the city limits.]

Lovelock: Sparring at work AND smacking their boss in the head with a fire extinguisher?  HEROES!

Starkwell: Yeah… this will end well.

In the next few minutes we see a flashback scene involving a young bare assed Fujio being spanked by a pedophile high school teacher, a shot of a person's head being kicked off of their body and flying into orbit, while still talking, and finally a bunch of zombies rising up out of Black Fuji and attacking people.  We also saw a zombie eating a dude's wang.

Starkwell: There have been more pedophile jokes and references than zombies so far.  Not exactly a promising start.

He's complaining, but they seem to both like the main characters quite a bit.  There is very little make-up for the zombies.   They basically just look like people with slightly gray faces.  Somehow it works though.  "Better that than crappy cheaply and incompetently produced Nintendo Pac-Man bullshit" says Lovelock.  Not entirely sure what that means, but I guess it's a compliment.

[Matsuo tells Fujio he has cancer, but has felt better since he started working at the factory and teaching Fujio the wonders of Jiu-Jitsu.]

Lovelock:  There should be a hundred movies starring these two guys, zombies or no zombies.  I would watch them all, all the time.

They meet a girl, but then Matsuo gets bitten.  He gives Fujio his Jiu-Jitsu robe and jumps out of the van.  As the girl and Matsuo run away from zombies, it fades to black.  Before any of us had a chance to be sad, we are treated to an animated montage explaining that Tokyo died over the course of the next few years.  Eventually there was a new society where the rich stayed alive, lived in huge towers and used the poor as their slaves and as zombie food.

[Fujio is a fighter in this new civilization that fights zombies in a ring to entertain rich elite older women.]

Starkwell: He learned from the best.

[Fujio returns home to the slums where he lives with the girl and their daughter (?), and talks to a Matsuo shrine he has built in his shantytown home.]

Lovelock: I still can't believe he's gone.  I don't want him to be…

Starkwell: They're the best team ever.  Even if we only got like thirty minutes of them, they are the best.  Ever.

Fujio loses his next fight, without being bitten, but nonetheless his spirit is crushed.  A single tear can be seen running down Lovelock's cheek.  Then, it turns out that Zombie Matsuo has been found and recruited by the fighting association.  Fujio must fight his former master!  Lovelock nervous farted seven times in a row.  EDGE OF THEIR SEATS.  Both Lovelock and Starkwell resisted the temptation to make Vader-Obiwan references.

[Fujio and Matsuo fight with super slow Jiu-Jitsu for like five minutes.  Matsuo starts talking to him.]

Starkwell: Wait… so he's not a zombie?

Lovelock: Is the dream team back?

[Matsuo tells Fujio he needs to kill him and move on.]

Starkwell: Wait… so he is a zombie?

Lovelock: I don't know, man… I just want the ol' gang to get back together.

Then some random group of rebels show up and starts spraying all of the rich ladies with piss and shit out of a piss and shit mini-gun.  Fujio decides to fulfill his destiny by traveling to Russia with his family, to train and become a number one man.  And then all of the zombies are released and shit starts making even less sense.  Seriously though, when the main character(s) is cool like this… who really cares?  They set it up for a sequel, and also show us that Matsuo was never actually bitten by a zombie, because the zombie that bit him had dentures.  He still thinks he's a zombie though.  He chases after Fujio as he rides to Russia.  Holy Hell we all wish that they had gotten around to making that sequel.
Documented by Kev D. and Posted at 08:15