The Dead and the Damned. 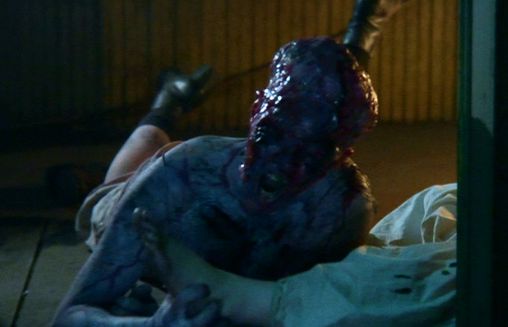 Starkwell and Lovelock have watched exactly two movies involving cowboys and zombies and have enjoyed exactly none of them.  Let’s see if this mockbuster (???? it’s alternate title was “Cowboys & Zombies” and I guess was released to coincide with “Cowboys & Aliens”) changes their opinion on ‘western’ zombie films.  Right now their opinion is “Fuck those movies”.

Lovelock: Looks like it was filmed at ‘The Great Escape’ in Lake George.

We don’t know why everyone is after this one guy (who I assume becomes the main character), but he is wiping the floor with the posse on his ass.  Apparently he is a bounty hunter, and he’s catching bad guys.  The choice of actor was pretty hilarious.  For a tough Wild West bounty hunter, he has the most nasal non-tough voice I have ever heard.  Just when he couldn’t get any more ridiculous, it cut to a shot of him uncomfortably riding a horse and Lovelock nearly shit himself laughing.  He stopped laughing once he realized that the scene went on FOREVER and basically served as a music video for a really shitty song.

[Girl gets naked, pervert watches from the bushes.]

Lovelock: Those are some mighty big and perky implants for them ol’ pioneer times.

Starkwell: The attention to detail in this film is shocking.

Seriously, no-budget crappy films should never try and make any kind of period piece.  Story wise, some random prospectors find some kind of slimy meteorite. The villagers decide to crack open the meteor, which gasses the whole village.  I’m guessing they will all become zombies.  “ABOUT FUCKING TIME”, chimed Lovelock.

[Bounty Hunter is hunting some Native, he finds him, and they fight in the desert.]

Starkwell: Gap khakis! The choice of most Native American Warriors!

Oh, along the way, Bounty Hunter bought a woman, we’ll call her Blondie.  Meanwhile zombies start eating people.  A girl is running away from a zombie into the woods, obviously with her shirt wide open and her tits hanging out.  I think she was hired for her ACTING SKILLS.

[Blondie needs to wash the green zombie blood off, so she strips and washes in the river.]

Starkwell: I’m starting to see a trend here.  I think I get a sense of what the audition process was probably like.

Starkwell: Either that or Blue Man group are really struggling these days.

The movie is already slow as molasses, but if you can believe it, it slows down even more.  The movie actually tries to develop the characters, and a relationship between Bounty Hunter and Maternity Pants Warrior.  None of it works, the dialogue sucks, and Lovelock and Starkwell are bored.

[Just passed the one hour mark.  Only about three zombies so far.]

Starkwell: That was weak, even by your standards.

Lovelock: Sorry.  I got nothing left.  This shit is awful.

Starkwell: Anyways, the movie is actually called “The Dead and the Damned”.

The movie isn’t even able to have consistent zombie behavior.  The zombies in the woods were like something out of “28 Days Later”, but now Blondie is being chased by some kind of blind zombie girl with a melty “Toxic Avenger” face that crawls around the floor like a dog.  Obviously melty face's boobs are showing too.

[Bounty Hunter fights a bunch of zombies in an open area.]

Starkwell: Well, this is all very pointless.

[German Bounty Hunter who was in one scene earlier in the film, shows up and saves Blondie.]

[I shit you not, they run away from the village with the zombies hot on their heels, and the film sets it up like there should/would/could be a sequel.]