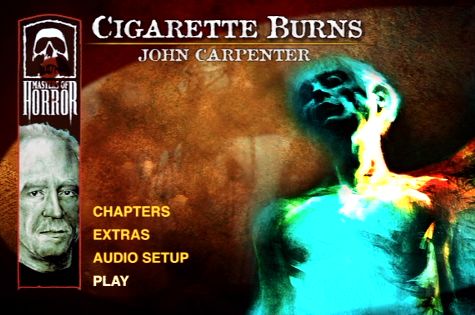 Calling Masters of Horror a mixed bag isn’t really being fair to bags.  From what I’ve seen, it’s pretty much a mixed bag of shit.  “Homecoming” was great, but the rest have done little to impress Starkwell and Lovelock.  Let’s see how Carpenter’s entry “Cigarette Burns” fairs.

Lovelock: This one already has a lot more promise than the others.

The story is pretty nuts.  A semi-famous and reclusive director hires a theater owner, Kirby, to find a rare cursed magical film out there called “LA FIN ABSOLUE DU MONDE”, believed to be out of print and/or non-existent.  The one official screening on record caused the entire audience to go insane.  Anyone who talks about it, tries to find it, catches a frame of it, slowly goes bananas and starts seeing things.

Starkwell: Knowing what he already knows, why would you want to see the film or have anything to do with it?

Lovelock: The ‘Manos’ crew all went nuts and yet, Mystery Science Theater went after that one.

Starkwell: Fair enough.  But there’s a difference here, especially since he just saw some kind of demon that apparently came out of the film.

[Kirby starts researching the film, and having acid flashbacks of his dead girlfriend.]

Starkwell: If he just spoke French, he may know that he is likely bringing forth the end of the world.

Intrigued, entertained… Starkwell and Lovelock are FULLY GLUED to the screen.  It’s like a cool horrible private eye short.  It’s pretty sweet, to be honest.

[Kirby is drugged by French guys who are looking to make a snuff film STARRING Kirby.  They chop a woman’s head off right in front of him.]

[Kirby blinks and suddenly he is free and apparently he murdered the Eurotrash with the machete.]

Lovelock: WHY DIDN’T THEY SHOW THAT.  Dammit.  Fucking dammit.

Starkwell: Darryl for the win.

[He meets the wife of the EVIL FILM’s director, who informs Kirby that SATAN produced the film.]

Starkwell: I would love to hear the soundtrack.

So he gets the film and brings it back to the reclusive director.  Eventually Kirby goes back to the guy’s house to retrieve the film.  Asian butler greets Kirby at the door and then stabs himself in the eyes.  Kirby goes to find the director who is in the process of running his intestines through the movie projector.  Then Kirby blows his brains out and the demon from the film takes the reels and walks away.  Starkwell and Lovelock can’t figure out if they were more horrified by the film’s images, or by the fact that it made no sense.
Documented by Kev D. and Posted at 21:04