Cabin In the Woods. 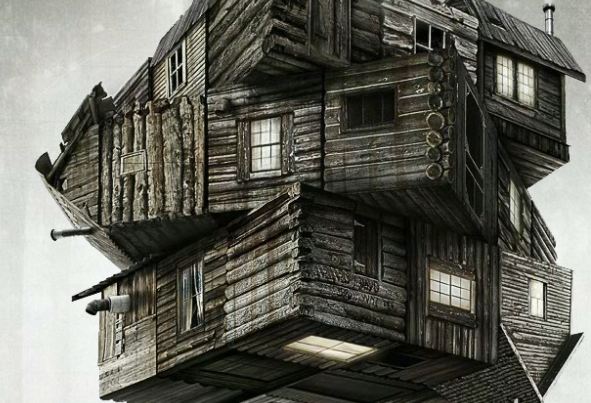 I’ve been pretty mean to Starkwell and Lovelock lately, so I think I’ll show them something with a little more promise.  David Goddard and Joss Whedon team up for this recent horror romp in…the woods?  We’ll see I guess.

[Two characters have a conversation.]

Starkwell: Thank you.  Thank you COMPETENT writing.  Oh how I’ve missed you.

[Lovelock was actually weeping at how engaged he already was.]

[Girl walks around her room in her underwear… with her roommate also in the room.]

Starkwell wants the two guys from the first scene to come back.  Now we’re into college kid town and the acting has taken a considerable nosedive.  Dialogue still works though.  Anyways, the college kids are heading towards a cabin in the woods.  It’s REALLY in the sticks.  Meanwhile the two guys from the opening are tracking them…we don’t know why.

[A falcon flying  next to the RV explodes when it hits a forcefield of some kind.  A forcefield that the characters don’t notice (but we do) that they drive right into and get to THE CABIN!]

Starkwell: Just shut up and watch.

[They arrive at the cabin and it’s WAY creepy.]

The two older gents from the beginning are watching them with an entire crew of people through hidden cameras littered all over the cabin.  They’ve also apparently been messing with the kids already, they have bloodwork on them and have even put drugs into the blonde girl’s system through her hair dye.  Interesting.  Now the whole staff is taking bets on how the kids are going to die…I think.

[They play ‘Truth or Dare’, obviously, and main girl Dana is dared to go down into the cellar… that has a trap door that just swung open by itself, mysteriously.]

Lovelock: I would quit the game so fast.

Starkwell: I wouldn’t be at the cabin in the first place.

Lovelock: Yeah, but that’s because you wouldn’t have been invited, because you’re wicked lame and have no friends.

[Then Starkwell slapped Lovelock in the face.]

As the kids explore the cellar, they read a creepy diary that explains about how people were tortured and killed and shit in this cabin.  The stoner guy hears a voice whisper “KEEP READING”, at which point Dana reads the magic Latin passages anyways and then a bunch of zombies rise from their graves around the cabin.

[Apparently ‘Maintenance’ won the staff bet, that ZOMBIE REDNECK TORTURE FAMILY would be the killers.  Everyone cheers.]

Lovelock: This is my favorite thing.

[Then Lovelock did a bunch of roundhouse kicks.]

The Stoner character, under the influence, seems to already know something fishy is going on, even saying “puppeteers” at one point.

[Blondie and Quarterback start having sexy sex in the woods, but the zombies show up and start a killin’.  The puppeteers watch and cheer.  They chop off Blondie’s head.]

Starkwell: Did the puppeteer guy say “show us some boobies”?

Lovelock: I don’t know but this guy’s a character.

The puppeteers also made mention that they have customers to satisfy.  They are doing a good job keeping us guessing about exactly what in the FUCK is going on.  Starkwell and Lovelock are at the edge of their seats, clutching their blankies as Stoner dies second and Dana manages to kill one of the zombies. There appear to be puppeteers all over the world conducting similar experiments, and all of this to appease “The Ancients”.

Nice Guy dies, but Dana is still alive.  Apparently whether or not she dies is optional for completing the ritual.  As the entire crew of puppeteers celebrates, and Dana is about to be killed… STONER RETURNS and saves the day.  Looks like the ‘customers’ or ‘the ancients’ are not appeased.  The puppeteers are worried, but Starkwell and Lovelock are super psyched.  Stoner finds a maintenance elevator, and him and Dana take it down to wherever it goes.

[Dana and Stoner pass by a bunch of cells containing the stuff of nightmares and end up in the lab.  A voice speaks to them.]

Lovelock: Regardless of that, this movie is giving me a fucking boner.

Starkwell: The things that give you a boner are pretty disturbing.

Lovelock: It’s not a sex boner, it’s a horror boner.  You know like when…

[Dana and Stoner press some buttons and release all of the nightmare creatures into the lab.  Horrible blood and guts and torture everywhere!]

[Then one of the lab workers was killed by a unicorn and Lovelock’s joy boner was so big he passed out.]

Sigourney Weaver shows up, she’s the mega boss!  Anyways, after explaining the situation to Dana and Stoner, they kill Weaver and decide that they will let the world end.  The film ends with one of the Ancient Gods rising up.  I’m guessing to kill everyone and end the world.  Sounds like a solid plan guys.
Documented by Kev D. and Posted at 08:00