Burial Ground: The Nights of Terror. 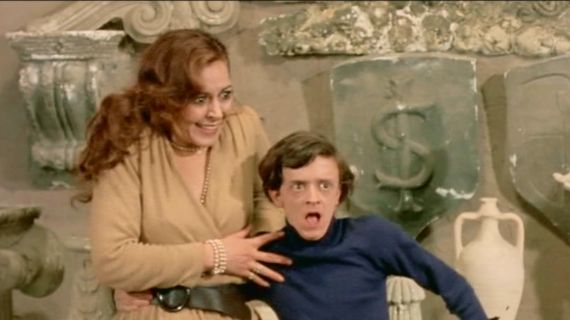 Well, you all knew eventually I would get around to showing them “Burial Ground”.  I hope they’re ready.  Here’s a hint for you: THEY’RE NOT.  No one is ever really ready for “Burial Ground”.  It’s kind of like how no one is ever really ready to be punched in the scrotum.  Anyways, Starkwell and Lovelock are about to be punched in their collective scrotum.

[Day for night scene involving a dude with a huge beard exploring some ruins.]

Starkwell: It’s been a while since I’ve seen that good, AKA BAD, of a day for night shot.

Lovelock: It’s been a while since I’ve seen that good, AKA AWESOME, of a beard.

[Beardy gets eaten inside the ruins.]

Lovelock: I like what this movie is saying, so far.

Starkwell: Might be the quietest zombies I’ve ever seen.  But not heard.

In the next few minutes we are introduced to the infamous MANBOY, a weird looking grown man playing a child.  It’s generally what this movie is remembered for.  Anyways, MANBOY walks in on his parents doing it, which only adds to his overall creepiness.

Starkwell: He looks older than his “parents”.

I think the film is about three couples, one of which has their MANBOY, that have gathered at some professor’s mansion.  I believe the professor is beardy that was eaten at the beginning.  The couples all seem mostly interested in having sex at various locations in and around the mansion.  Then zombies start showing up in and around the mansion as well.  Mostly interrupting people doing sex, mostly.

Starkwell: Is that zombie blind, or is it just that the actor can’t see while wearing that cheap rubber mask?

Lovelock: At least they’re killing people already, and there are lots of them.

Starkwell: They’re killing PERSON.  Only manboy’s father has been eaten so far.

Lovelock: Yeah, but he got eaten HARD.  Still, like I said, there are lots of them.

Starkwell: Yeah but, the film makers are not making ANY effort to have a story of any kind.

Lovelock: Unless people trying to do it and being interrupted by zombies counts as a story.

Starkwell: It most certainly does not.

So far, Lovelock loves it and Starkwell hates it.  I don’t think I’ve ever seen them this split on anything.  But at least Starkwell is sticking around, for now.  The gore looks bad and quite fake, but it is plentiful, which helps keep Lovelock on board.

Starkwell: Totally.  If you enjoy boredom.

[MANBOY tries to make out with his mom, fondle her breasts and touch her between the legs.]

Starkwell: Did he just say he remembered sucking on her breasts as a baby?

Starkwell: Why did it take her so long to push him away?

[MANBOY runs away and is killed by a zombie.]

Professor McBeardy comes back as a machete wielding zombie and starts eating his butler.  With only ten minutes left, there is absolutely no sign that there will ever be an actual story of any kind.  Or an explanation of anything.

[They find an old church and go in, but then come across a bunch of Monk Zombies dressed like friar Tuck.]

Lovelock: That’s why I never go to church.

Starkwell: I think you’ve said that before.

Lovelock: There are always reasons not to go to church.

Then zombie MANBOY shows up, and his mother hugs him and tells him to suck her breast like when he was a baby and starts moaning.  Like an orgasm moaning.  Then zombie MANBOY bites her nipple off.  Just as Starkwell got up to leave saying “FUCK THIS” everyone else died and the movie ended.  You have to give the movie credit for basically being nothing but zombie attacks from minute one to minute last.  But that’s as far as anyone should really go at giving this film credit of any kind.  Unless ‘oldest looking guy to ever play a young child that sucks on his mom's nipple’ is an award out there in movieland.  I don't think it is.
Documented by Kev D. and Posted at 21:56