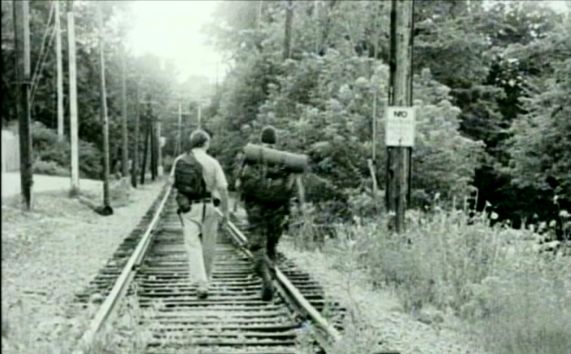 I haven’t really heard much about the recently unleashed “Biophage”.  I know that it has a short running time, which, for the most part, Lovelock and Starkwell tend to appreciate.  Let’s see how this plays out.  Shot in glorious FULL SCREEN.

[Film opens with black and white picnic sex dream sequence, that ends with the booby girl biting the main character.]

Lovelock: Might be a new record for “SOONEST BOOBIES”.

Starkwell: Not entirely sure they should be proud of that.  Why’s it in black and white?

The film starts off and the outbreak is already in full effect.  We appear to be following some military types (a soldier and a doctor) as they do some kind of mission to the CDC, which actually looked like it was most likely one of the producers’ backyards.  Then they show the two of them walking alongside a railroad track and Lovelock falls asleep for a little while.

[They stop for dinner at a farmhouse.  The old farmer feeds them… PEOPLE.  Then there’s a gunfight.  Farmer dies.]

Lovelock: You know, the doctor loved the meat, but then he finds out its human and vomits?

Then they replay the booby dream and Starkwell is like “Yeah, because we didn’t get it the first time.”  I should mention, we’re already halfway through the movie.  Somehow, we’ve only seen one zombie, and yet we’ve seen that sex scene twice.  Eventually we see more zombies, and to be fair, they don’t look that bad.

Starkwell: Of course there’s a crazy Southern Reverend with an eyepatch.

Lovelock: Of course he has a sexy assistant.

[Then they made fun of the acting for a while.]

Starkwell: Was that the director’s way of being all “Guess what?  There’s no point.”

Lovelock: I don’t think he thought that far ahead.

[Soldier makes it to the lab, everyone’s dead.]

Lovelock: High tech lab, with the oldest computers ever.  Who still has those old-style monitors?  It's the size of a smart car.

Starkwell: And a map stapled on the wall?  It’s all very official looking.

Lovelock: I bet the book was better.

Starkwell: There is no book.

This is another fine example of a relatively new and fully bad zombie movie, lending more credibility to Starkwell’s claim that the low budget zombie genre is as stale as Melba fucking toast, and basically died in the early nineties.  “Digital bullshit and iMac Nintendos killed good old fashioned backyard horror.”  His words, not mine.  Lovelock said “bad, but still watchable and, hey, at least it was short.”  What a review.
Documented by Kev D. and Posted at 08:00