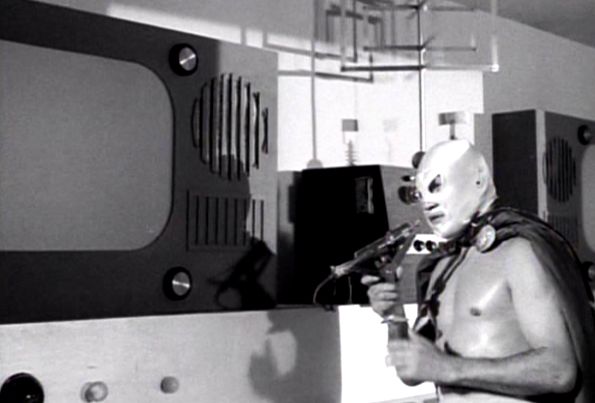 Legendary Mexican wrestler ‘El Santo’ fought all sorts of mythological beings, super villains and other wrestlers throughout his illustrious career.  Arguably the most famous of all luchadores, inevitably, he would have to fight the living dead, because any hero worth his weight in piss simply has to battle zombie hordes at some point.  This is some of the best shit the early sixties has to offer, I kid you not.

[El Santo wrestles in front of a packed house.  It seems to mix stock footage and more close up shots.  It’s fucking awesome.]

Starkwell: This certainly proves one thing, that pro wrestling CLEARLY isn’t what it used to be.

[After the credits roll, it cuts to another El Santo match.  The crowd carries him down to the ring on their shoulders.]

Starkwell: Is this movie going to mostly just be wrestling matches?

Lovelock: Honestly, I ain’t complaining if it is.

Starkwell: I know you.  You’ll complain.  Especially if no zombies show up.

Lovelock: Whatever dude, the title said INVASION.  INVASION of the zombies.  And you can bet your last buck that El Santo is going to wrestle the pants off of every last one of them.

Starkwell: Zombies don’t really need pants.  He should wrestle their heads off.

So after a solid ten plus minutes of wrestling footage, we start to have a story developing.  It involves a beautiful woman and her missing father.  Then we see three zombies getting out of a car and robbing a jewelry store.

[Moving at the speed of molasses, the zombies crack he safe, a cop shows up and unloads his entire pistol on one of them.]

Lovelock: Man!  That cop ain’t fucking around.  First shot, directly in the middle of the forehead.

[Head shot does nothing.  More cops show up, and shoot at them, and they just slowly walk away.]

Starkwell: They’re not mean zombies.  They aren’t even hurting the cops.

Lovelock: Well that and the heat.  My God, the heat!

Then the cops contact El Santo on his El Santo video phone to tell him about the indestructible zombie thieves.

[Woman walks the city streets asking people if they have seen her father.]

Starkwell: Mexico City looks kind of like a painting.

Lovelock: And not a very good one.

Then there was a dance sequence, and you KNOW how Starkwell and Lovelock feel about useless dance sequences.  They hate them.  Still Starkwell has so far been impressed with the cinematography and the general style of the film.

[The three thief zombies set fire to an orphanage and try to steal some children.]

Starkwell: No. They’ve crossed the line.

[El Santo shows up.  Saves the kids, wrestles the zombies.]

Starkwell: Seriously though, if guns don’t work, what chance does El Santo have?

[Zombies drop El Santo on his ass, kick the shit out of him.]

Lovelock: I don’t believe in anything anymore.

Then there was a car chase and a car explosion.  I think Starkwell said something along the lines of this movie having it all and Lovelock did a roundhouse kick and broke a lamp.

[Two zombies climb into a girl’s window, and El Santo storms in and stops them from taking her.]

Starkwell: Why was he just waiting around right outside of her bedroom?

[El Santo throws the zombies around the room and they vanish into thin air.]

Starkwell: If they can turn invisible, why wouldn’t they just be invisible all of the time?

Lovelock: If they can make fire like that, why wouldn’t they just light El Santo on fire?

Plotholes and questions aside, they really are enjoying this film so far.  Then the zombies climb into another window, choke out and kidnap El Santo’s tag team partner and make him full zombie and Lovelock was all “GASP!”  I should note that there are two mad scientists dressed like executioners that appear to be behind all of this.

Starkwell: I love that he fights zombies but then still makes time to entertain people at the arena.

Lovelock: The show must go on.

After, the zombies come for El Santo, through his window, obviously.  The zombies almost unmask El Santo, but then he kicks one in the medallion and it blows up.  The medallion blows up, not the zombie.  Lovelock says he WISHES the zombie had blown up.  But then Lovelock is all “OF COURSE!  THE MEDALLION! Great work El Santo!”  Eventually El Santo finds the secret dungeon/castle/laboratory and wrestles the shit out of more zombies.  For some reason these zombies have belts, not medallions.  I don't know why, but it did lead to a weird scene where El Santo was on his knees with his face right in front of a zombie's crotch, and taking his belt off.  In the the end, he also wrestle/destroys the two Executioner Scientists, who turn out to be the girl's missing Father and Uncle, and all of the zombies disappear into a puff of smoke.  Then El Santo leaves before anyone can thank him.  Apparently El Santo doesn’t like to wait around to be thanked, but if he were here, I’m sure Lovelock and Starkwell would try.
Documented by Kev D. and Posted at 09:02