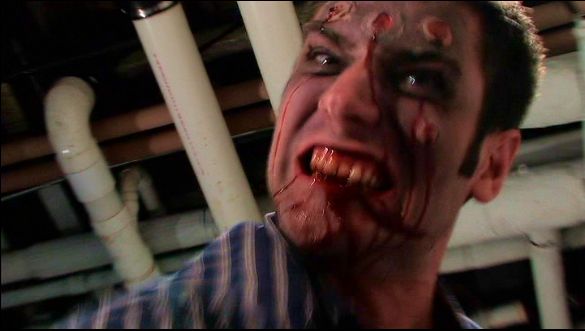 Starkwell and Lovelock hate this kind of shit.

[Film starts. Some dudes hang out in a graveyard waiting for zombies.  One guy has his eye ripped out, and then the other guy hands the zombie a guitar and says “I love zombies”.  And the worst ‘punk’ song ever starts playing.]

Starkwell: So, this is one of those movies where all of the actors are just so psyched to be in their friend’s shitty movie that they smile in every scene all of the time?

They lasted about ten more minutes, if that, and walk out.  I should mention, the main character has a hilarious bowl cut.  The end.  Sometimes, even after they leave, I fast forward through the rest of the film, just to see what happens.  This time, I didn’t.
Documented by Kev D. and Posted at 12:15