Night of the Living Dorks. 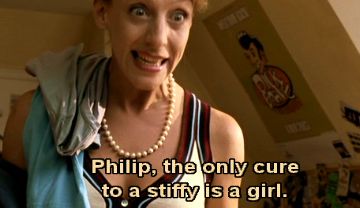 I used to think that a movie whose title is simply a play on another movie’s title would automatically be disqualified from actually being cool.  However, then there’s “Shaun of the Dead”, a play on Romero’s “Dawn” and an exceptional movie.  So maybe they aren’t all inherently horrendous.  Since Lovelock and Starkwell are about to watch a night of the living “dorks”, I can’t help but hope that this 2004 German film doesn’t allow my original prejudice to rise from its grave.  You see what I did there?

[You really can’t watch the dubbed version.  It really weakens the film.]

[In Haiti, zombie attacks family, grandma kills it with a flamethrower.]

Lovelock: Off to a good start.

[Someone steals the zombie ashes until they end up on the German version of eBay.]

[Kid wakes up with a huge boner.  Mom tells neighbor girl about it.]

Philip and his two weenie friends, named Weener and Konrad, drive to school in a shitty VW MiniBus and talk about humping girls.  Philip likes the most popular girl in school, and OBVIOUSLY doesn’t realize that his neighbor, the Goth Girl, clearly likes him.  As soon as he gets to school, he tries talking to Popular Girl and, as a result, Philip, Weener and Konrad all get punched in the face by the Popular Dudes and Philip gets a wedgie.  This sparks a conversation between Lovelock and Starkwell about when the last time they saw a wedgie in a movie was.  As they discussed this, they didn’t miss a whole lot, other than being introduced to every character in the cookie cutter high school comedy book.  Oh, and it turns out the Goth Girl’s other Goth Buddy is the one who has the zombie ashes.  I feel like something bad is gonna happen.

[Weener Gang go to the cemetery with the Goth Gang and try to raise the dead using the zombie ashes.  Ashes end up all over Weener Gang.]

Then the Weener Gang get in a car crash and die, and they all wake up in the morgue, with their toes tagged, dead, but still themselves.  Starkwell and Lovelock weren’t saying much.  Most of the jokes worked relatively well, and the story was enough to keep their interest.  I think they were anxious to see where this was going.

[Apparently, as zombies they have x-ray vision?  Well, at least Konrad looked at a classmate’s ass and immediately her jeans disappeared and he saw her bare ass.]

Starkwell: Wait… can he actually see naked girls under their clothes… or is it just like when a cartoon character is hungry and looks at someone and they turn into a turkey?

Lovelock: I’m not sure, but I think either way the answer is “Director likes showing teenage ass”.

Weener and Philip seem to be acting relatively normally, but Konrad is going crazy… biting girls’ asses in class, eating raw meat in the cafeteria refrigerator and trying to get revenge on everyone in his “nerd” diary (apparently he kept a document of all the times he has been bullied, and who has bullied him). Philip and Weener try to talk some sense into Konrad, which annoys Lovelock who says “let him get his revenge!”  He always roots for the vigilante zombie underdog.

[Weener Gang play rugby against the Jocks and win!  And they plan on throwing a party at Philip’s house! Popular Girl kisses Philip!]

[Konrad goes to the gym teacher’s office, he is clearly a pedophile and has posters of naked schoolboys… Konrad eats him after Gym Teacher tells him he has a big fat sausage to feed him…]

They locked Konrad up so he wouldn’t eat people anymore… they gave him an old-school Gameboy for when he gets bored.  He looked at the cartridge, and said “Barbie’s Supermarket Adventure?” seemingly disappointed, but then follows it with “But I’ve played it three times already!”  It’s a good joke, but something about it struck Starkwell as REALLY funny and we had to pause it for a while so he could catch his breath.

[Four dudes have a jerking off contest… ???]

Starkwell: What the fuck dude?

Starkwell almost walked out during the gratuitous boob portion of the film, especially when they showed one of Philip’s testicles falling out of his pants and Weener stapling Philip’s penis back onto his body.  Lovelock was intent on staying too, although it made him feel all woozy and I think he may have blacked out for a second or two.  He woke up during the Konrad “Michael Jackson’s Thriller” dance scene… which only confused him more, especially since the music wasn’t ACTUALLY Jackson.

Lovelock: Why must they try and suppress his awesomosity?

[Philip and Weener throw dead body down the stairs and hide it in a freezer.]

Starkwell: Solid stunt, whoever that actor was.

Anyways, Philip ends up at Goth Girl’s place with the Necronomicon, and his stomach growls while he stares at her boobs and butt.

[He ends up burning the book when he knocks a candle over.]

Starkwell: Where is it written that in order to do Goth Shit you need to have nothing but candlelight? Fucking turn a light on and shit won’t get burned.

Anyways, they work with Rebecca Goth Girl to try and figure this shit out, which basically translates into a montage of them interrupting baptisms, asking girls in town if they are virgins, cleaning the house before Philip’s parents come home, and of course, making a potion!  So basically the potion works and all is back to normal.  The end.
Documented by Kev D. and Posted at 08:08