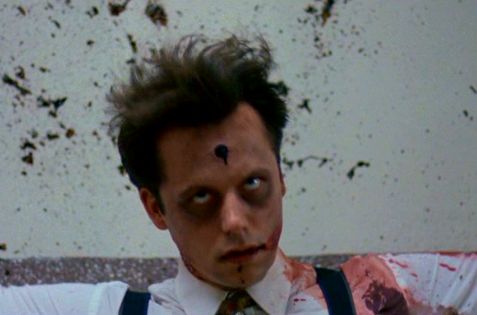 I honestly feel like if you were to create a history of my love of cheesy horror films, it probably all starts with “Jason Goes to Hell”.  I don’t want to age myself here, but I was young enough to be at least somewhat frightened, but old enough to totally laugh my ass off.  That was the night I first met Starkwell and Lovelock.  As much as I know that the years will not have been kind to this movie, and that it likely will not be even remotely frightening as I remember, nor as funny as I thought back then, and that this trip down memory lane can only end in TOTAL TRAINWRECK, I can’t help but feel excited to revisit this, with my two favorite film critics, now that we’ve all grown up and matured.  Yeah I know.  I made them watch “Erotic Nights of the Living Dead.” Maybe 'matured' is a strong word.  FUN FACT: One of the writers eventually went on to write for the AMAZING but short lived television show “Arrested Development”.  Maybe there will be some real comedy in here after all.

[Girl goes to a cabin, gets naked.]

Starkwell: Two boobies, one ass, and not a single line of dialogue yet.

Lovelock: You know what they say, “Talk is Cheap, Boobies are Forever”.

Starkwell: No one has ever said that.

[Jason shows up to kill girl, turns out she’s a cop, it was all an elaborate ploy to get Jason.]

Starkwell: Why is he out in Crystal Lake anyways?  Didn’t he take Manhattan?

A bunch of cops shoot the bajesus out of Jason, he makes hilarious noises, then they shoot him with a rocket launcher and he blows up.  Lovelock was laughing his ass off, but Starkwell was asking a whole lot of questions.  It’s just like I remembered.

[Jason’s blown up body is at the morgue, doctor does an autopsy.]

Starkwell: Why would they be doing an autopsy?  Cause of death... WE BLEW HIM UP.

Lovelock: He’s a superhuman, maybe they want to try and learn his secrets?

Starkwell: So they hand him over to ONE doctor, working the graveyard shift at a shitty local morgue drinking orange soda?  Dude's body should be brought to Area 51.

[The Doctor is drawn to Jason’s heart, he picks it up, eats it, and then a bunch of light beams shoot into his body.]

Lovelock: So, no cameras or real security in this morgue then...

Apparently the doctor is now possessed by Jason.  He even walks by a mirror and his reflection showed Jason, NOT THE DOCTOR!  Then they introduce some crazy bounty hunter guy named Creighton Duke.  The movie seems confused with itself, unsure whether or not it wants to be a comedy or a scary or a seriously.  Lovelock and Starkwell both kind of dig the Duke though.

[Nerdy main character guy picks up teenage hitch hikers and drives them to Camp Crystal Lake.  They all get naked and two of them start to screw.]

Starkwell: Kind of sucks to be that other girl.

Lovelock: Seriously, she’s so desperate she offered Nerdface sex just like that.

[The girl that isn’t screwing gets killed by Possessed Doctor.]

Lovelock: We’ve seen as many pairs of boobs as we have seen kills.  And now we’ve seen some side peen.  Weak.

[Jason stabs Sexing Girl through the tent and cuts her in half.]

Then there’s a weird scene where the Doctor ties up a cop and transfers Jason to him via a kiss (I think).  And why did he shave off his mustache first?  Makes no sense.  I think it was Lovelock who said “Jason is an STD” or "Jason is like mono".  In the following scene we see the cop attempt to do the same to the waitress from the restaurant, who, for some reason wears her waitress outfit at home.  We see some kind of worm-snake protruding out of his mouth.  I think Starkwell just gave up.

[Then the Duke explains to the Nerd that only a blood relative of Jason can kill Jason.  Turns out the dead waitress was Jason’s sister, so her daughter and grand daughter are also of the Voorhees bloodline.  Turns out Nerd is the father of the grand daughter.]

Starkwell: Right because it took nine movies for them to find out that Jason had a sister.

Only a Voorhees can kill a Voorhees, and only by destroying the heart.  Got it?

Lovelock: Nice to see them FINALLY delivering on the gore.

Starkwell: Too bad there is no actual Jason in “Jason Goes to Hell”.

Lovelock: I don’t care who cuts naked ladies in two, so long as they ARE cut in two.

So Sleazy News Anchor chases Nerd and Girlfriend around and kills a mess of people along the way.  The story gets crazier and crazier and makes less and less sense.  I think the best/worst part was when the Duke threw Girlfriend (Jason’s niece) a knife and it turned into some kind of mystical dagger.  Oh yeah, then Jason’s heart squiggled out of some guy’s severed head and crawled around like a slug squealing like an alien-pig.  Then it went up into Jason’s dead sister’s vagina (she was locked in the basement and still wearing her waitress outfit) and Jason’s dead sister turned into fully living Jason.  Anyways, in the end, Voorhees Niece stabbed Jason in the heart with the magic dagger and a bunch of huge zombie hands reached out of a hole in the ground (being lit up by a spotlight from the Heavens for some reason (Aliens?)) and pulled Jason into… Hell (I think)?    I should add there is no explanation AT ALL about what is actually happening.  The dagger, the heart theory, the zombie hands, the beams of light, how no one knew that Vooorhees had living relatives EXCEPT the Duke…NOTHING IS EXPLAINED EVER.

Starkwell: I love seeing the evidence of just how long they had been planning / working on the whole 'Freddie vs. Jason' thing.

Lovelock: Right... Jason, in 'X' FORM, still had to make one stop in space before he made it to that battle.  Ugh.

Was it everything we remembered it to be?  Kind of, yeah.
Documented by Kev D. and Posted at 10:30