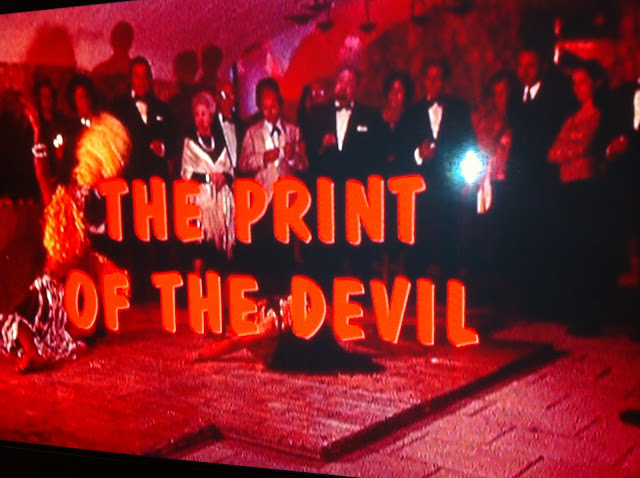 For the most part, this seems like it will be cookie-cutter Euroshock madness… as cookie-cutter as that can ever be.  I hit play movie and it immediately starts with some kind of dance ceremony being held in a dungeon someone, with a bunch of old white rich people in attendance.

[The title comes up and says that the movie is called ‘The Print of the Devil’ and is directed by a name not the same as that listed on TEH INTARWEBS.]

Starkwell: So… are we watching the right movie?

Lovelock: Is “Print of the Devil” kind of like “Mark of the Beast”?

The movie has some of the worst overdubbing I’ve ever seen.  And so far nothing makes any sense.  There’s a medium named “Claire”, and I think she’s undead.  But I can’t know for sure, because the movie makes no sense.  Apparently this hoity toity event is some kind of fashion show.  So obviously at one point we’re treated to a shot of the naked girls changing.

Starkwell: I guess they’re showing how easy it is to get into the groove whilst in the clothing.

There’s a creepy tall pale guy who gets semi-rapey with one of the girls after the show and then it cuts immediately to the post fashion show séance being held in the dungeonesque basement of the castle(?).  Anyways, at the end of this séance, the half naked Fashion Model screams and apparently felt a presence.

Starkwell: Did he just say “teach me the Occult Sciences”?

Lovelock: I don’t know, but this dude’s a character.

Starkwell: “Telepathy is another field I shall like to delve into…”

Lovelock: Amazing.  He just told the Medium that he heard she likes RIDING.

Starkwell: I think he means horses.

[Cut to the medium riding a horse.]

Starkwell: You’d think if they were going to have a character that enjoys “riding”, they’d get an actress who isn’t so clearly inexperienced while riding a horse.

Lovelock: I’d love to see a ‘Print of the Devil’ blooper reel where she falls off a bunch of times.

Lovelock: I feel those would make the final cut in this type of movie.

At this point, I’ve completely lost track of what is happening in the movie.  I think the Medium picked up some kind of Dwarf while she was out riding.

[She gets some dinner for the Dwarf, then takes off her clothes in front of him.]

Lovelock: If you feed him, he’ll never leave.

Starkwell: Wait… why is she… ?

Lovelock: Especially if she feeds him some of them big ol’ titties.

Starkwell: For a psychic, she’s awfully pre-occupied with the past.

Sometime during or after the fully unnecessary and absurdly long sex scene, Starkwell left the room and Lovelock fell asleep.  The end.  Well, not really the end, but I don’t feel like writing about this dud anymore.  At some point there was a black magic ceremony type of deal where some dude was resurrected.  It was the worst looking zombie / frankenstein’s monster hybrid that Lovelock and/or Starkwell and/or I have ever seen and then he goes around choking people out.
Documented by Kev D. and Posted at 07:50