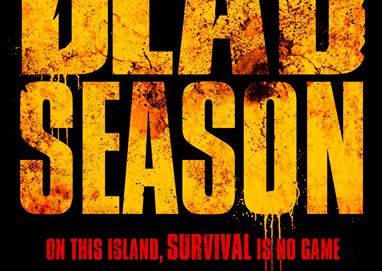 Starkwell and Lovelock seem largely unimpressed with the larger part of zombie films released over the past decade.  There are a few major classics that stand out, but so much of the genre has become stale, watered down, cheap (and not in the good way) and made by people either looking to make a quick buck, or people that don’t like the genre for the right reasons (I know… That’s being very pretentious, but fuck it).  This brings us to yet another new entry in the most flooded genre of the day, “Dead Season”.  We’ll see.

[The movie starts quickly with the outbreak in full gear, the narrator on screen makes mention of it beginning in .]

Lovelock: I’m surprised you’re not vomiting or throwing shit at the TV.

Starkwell: Subtle references can act as a polite nod to the classics.  If they get more “in-your-face” about it, or all “look, these are movies WEEEEee like too, so that means you should automatically like the turd that we made!” then trust me, you’ll hear some serious bitchin’ from this side of the couch.

So the film introduces us to who I assume will be the main character who continues his narration, which is actually not narration, but a conversation he is having with some random girl on a radio.  They make plans to meet.  The girl, Tweeter, and a little boy, Cody, go and meet with the main guy, Elvis.  Considering how fast the film was starting, shit then got real slow real fast.

Starkwell: Of course his name is Elvis.

They call the zombies ‘walkers’, which is pretty weak, since that’s kind of a “Walking Dead” TV show thing.

The trio of Elvis, Cody and Tweeter, make way to Elvis’ boat, which apparently works great now and has fuel.  The zombies look… well… bad.  But as Starkwell pointed out “at least they’re slow” to which Lovelock replied “LIKE THE ACTION.  AND THE STORY.”  Boom.

[Cody goes down into the boat’s cabin, gets bitten.]

Starkwell: Solid plan sending him down there, Tweeter.

Lovelock: Am I the only one who feels like the actors are whispering their lines?  Like they're not supposed to be filming there?

Starkwell: Another hallmark of such a high budget production.

Lovelock and Starkwell began asking me to fast forward, so, I THINK, after shooting Cody in the head, Tweeter and Elvis ended up on some island, where they met up with some rough bad people who took them prisoner.

Starkwell: Obviously we need to see them spray a bare-breasted Tweeter with a hose.

It’s not terrible so far.  It reminds them of another movie “Autumn”, since it similarly tries to hit some pretty heavy themes, but done on a shoestring budget and with a serious deficit in the acting and dialogue department.  Anyways, it turns out the people are running some kind of island community, with like, strict rules.  I guess Tweeter isn’t all that JAZZED to be another one of the community “whores” so, obviously, I don’t see Elvis and Tweeter becoming a valued member of their society.

Lovelock: Boy, you sure can feel the passion.

Starkwell: He looks as bored as I am.

Lovelock: TOM GREEN.  That’s who he reminds me of.

Tweeter makes plans with the Leader of the Island Folk’s daughter to escape the island on a boat that Tweeter found.  Eventually she lets Elvis in on the plan.  Also, the Island Community becomes overrun with zombies.

Starkwell: What is it with these movies, where like, half of the zombies have white eyes, and then the other half just look like people bleeding from the mouth?

Lovelock:  I guess not all of the extras owned white contacts…

Well, in the end Tweeter, Elvis and Rachel (the daughter) escape on the boat.  Basically, Tweeter and Elvis went to an island, did sex, avoided rape a couple times, and ended up replacing dead Cody with an alive Rachel… and… then they sail off into the sunset.  The end.  ‘A’ for effort.  I do commend the makers of the film for trying to do something a little more serious inside the genre, and actually, ALMOST pulling it off.  Most no-budget films go right for the cheap laughs, since it’s easier.  The problem with going the harder route?  Much more chance of utter failure.
Documented by Kev D. and Posted at 16:20