The Land of College Prophets. 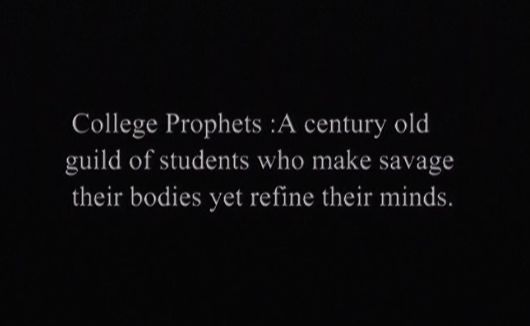 If you’ve never heard of this movie, don’t be surprised, neither had I, and then I saw it staring at me for ninety-nine cents at a local used bookstore.  And I HAD TO HAVE IT!  I don’t know what to expect, and certainly don’t know what to tell Lovelock and Starkwell.  I put the DVD in, and the film starts right away.  The narrator says some gibberish and a couple of dudes drop dead in a forest.  Then, music that would feel at home in a dramatic porno plays, as each of the characters are introduced… on screen… like it’s a video game.  Their names are things like “Bells”, “Sunshine Sal”, “Professor Holiday”, “Midas”… I wish I was making this up.  They all have costumes.  It seriously looks like a bad video game intro, except, live action.  Apparently they’re called the “College Prophets”.

Alright.  I can’t describe what’s going on.  No, I really can’t.  The narrator is talking non stop and they introduce like a hundred characters, and reference old stories as if we, the audience, should know what in the fuck they are talking about.  And all of these costumed characters go to Community College together and take the same classes.  The director randomly flashes poetry and ‘quotes’ on the screen, and shows flashback sequences to Sunshine Sal’s epic battles (?).  If ever there was a film that you could say perfectly embodies the notion of the trainwreck (don’t want to watch, but can’t look away) then “The Land of College Prophets” is it.  Starkwell and Lovelock were silently horrified for the next hour and a half.  It felt like an eternity.

Lovelock: If you took all the directors of local mattress store commercials, and all of the writers behind used car dealership commercial jingles, and trapped them in a room with blockbuster movies from the mid-nineties and a nerdy teenage boy who watches a lot of Pro Wrestling, and told them all to write a script in a day, I think you’d end up with this script.

The movie involves the “Well That Eats Children” that makes people go crazy and kill people… I think.  In a way, the film makers should be very proud of this.  In another more accurate way, they shouldn’t.  The end.  There were pink ninjas in a fake newscast, at one point!
Documented by Kev D. and Posted at 20:30