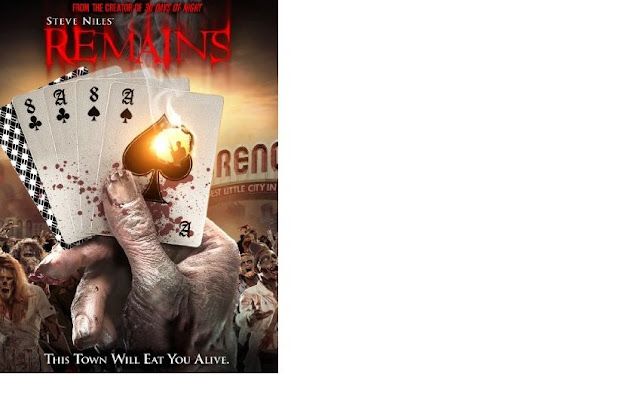 This movie appears to be as cookie cutter as can be.  Survivors of a zombie apocalypse hunker down in a CASINO!  One thing it has going for it is cast member Miko Hughes, who years ago, played a creepy ass zombie kid, as well as the kid in Arnold Schwartzinneggergegrge’s Kindergarten class that talks about boys having a penis, and girls, subsequently, having a vagina.  A fine moment in anyone’s career I’m sure.  Alright, here we go again.

[A lengthy introduction of and a bunch of characters.]

Starkwell: Wait… is Miko a magician?

While we continue to meet the characters, the TVs in the background talk about some kind of scientific breakthrough that will bring peace to the world.  It’s some kind of “nuke oven” that will destroy all nuclear weapons somehow?  All I know is that it looks like two huge tits.  Obviously something goes wrong and creates zombies.   Some of the characters were doing the sex in the safe, or the freezer, or whatever, so they did not get infected.

Lovelock: Not to mention that that ‘old lady’ is clearly a dude in his thirties wearing an old lady wig.

Starkwell: Bad acting, lame characters, running zombies AND a fairly unoriginal story?  Wow.  It really has it all.

Starkwell is having a lot of trouble with this one already.  For starters, the characters don’t even seem all that shocked by what is going on.  There is no explanation as to why some people turned and others did not, some zombies run and act rabid, others shuffle around slowly, some have ‘white’ eyes, others just look normal, some are decomposed, others not… yuck.  Anyways, the small group of characters split up and work on securing the casino.

[Apparently a lot of time is going by.  But they're all dressed the same.]

Starkwell: Do they ever change, or shower or…?

Lovelock: Where are they finding all the hair gel for Miko’s hair?  It looks painted on.

Starkwell: Why does the girl have to smoke?  So fucking ugly.

Lovelock: Also, she must have an endless supply of makeup stashed somewhere in the casino.

Starkwell: Some people store cans in a bomb shelter.  I guess maybe they would do hair mousse and foundation.

For a while, Starkwell and Lovelock were quiet.  It’s not an unbearable film, but it also doesn’t really do anything new or anything at all really...  Starkwell and Lovelock actually played a game of Scrabble while ‘watching’.  Not exactly a glowing review.  They did make many jokes about how inconsistent the zombies’ behaviour is.  Eventually some military types show up and complicate things with guns and shit.  But then they all end up back in the casino anyways.  Then they go around ‘cleaning’ the place up.  Again.  But this time with guns.  Eventually most of them die, and apparently the girl is some kind of smart super zombie that knows how to use a gun.  The end.  BARRRRRrrrrrFFF...
Documented by Kev D. and Posted at 21:25