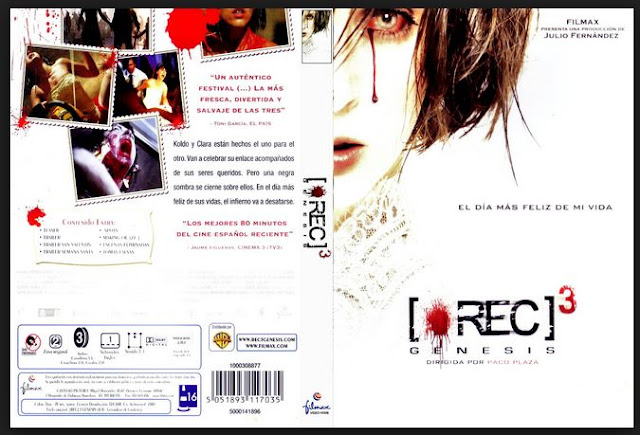 The third part of the series of "[REC]" films has been met with a great deal of hostility.  It was given a fair amount of thumbs downs from critics and fans alike.  It's more straightforward, and even drops the handheld first person view at some point.  I know from what I’ve read that it tries for a more “comedy” direction.  As the film starts, this is apparent, since it plays as if we have just put in a wedding video.

[‘View Photos’ is selected on the Wedding Video menu, and we are treated to a slideshow.]

Lovelock: This is why wedding videos are dumb.

After a few minutes it cuts and switches to someone filming first person view outside the church, before the wedding.  Anyways, the first one started similarly and did not take long to get going.  Since this is apparently happening simultaneously with the first film, I imagine it’s going to explode in action soon, especially given the film’s wimpy 80 minute runtime.  It is kind of a smart idea to have a found footage film set at a wedding, given most weddings have videographers.

Lovelock: If I wanted to watch a boring ceremony, I’d have watched the Royal Wedding.

Starkwell: If you’re going to make cultural references, try and be a bit more current.

[Closeup on an old man with a mysterious bandaged wound on his hand.]

Lovelock: Ok.  Alright. Here we go.  This is good.

Starkwell: I told you it wouldn’t take long.

We start seeing the wedding reception and it is GIGANTIC.  I imagine shooting this film must have been fun, since so far it just looks like they candidly shot a bunch of actors having a party.  They keep hinting at the fact that the bride is pregnant.  But she hasn’t had a chance to tell the groom yet.  We’re almost a quarter of the way through the run time, and all we’ve really seen so far is wedding footage.

Starkwell: Why isn’t anyone concerned that there are about seven or eight dudes outside who look like they’re hunting E.T.?

[Uncle Hand Wound jumps off of the balcony down to the dance floor and starts eating his wife.  Zombies start jumping out from everywhere and eating people.]

Starkwell: Well, you wanted it to get going…

Lovelock: Even I feel that’s a bit much.

Starkwell: Wait, if this is the movie what was all of that before?

The movies presses forward at a fast pace. It’s pretty cookie cutter stuff at this point… which is too bad since the series had started off with such a nice and fresh take on the whole zombie thing (I mean, the first film was looked at as a new achievement in ZOMBIE). Now it kind of feels like one of its own mockbusters.  We’ve already seen a topless zombie and a fat person zombie.  They’re really hitting all of the clichés.

Lovelock: Plus I’m having fun!

It’s picking up again in the story department.  A chunk of characters (including Groom) are now bunkered down in the church.  The zombies seem to be afraid of the church, which makes sense, since we know from the second film that they are all demonically possessed.  At least they haven’t gone and changed everything.

[The bride, who is hauled up somewhere else with the priest gets a speech about how this is GENESIS.]

Lovelock: Yeah, Mr. Priest, this is a prog rock band from the 70s… pfff…

Starkwell: I don’t think that’s what he meant.

Starkwell: The bride’s makeup still looks perfect.  What the fuck?

There was one crazy shot where multiple zombies stood in front of a mirror and their reflection showed what they were… NAKED OLD decrepit DEMON things!  Starkwell and Lovelock both gasped and I’m pretty sure Lovelock farted nervously.  Lots of shit is happening, and at some point, some of the characters started fighting with armour and ancient weapons they picked up around the old church.

Lovelock: Might be the most metal zombie kill we’ve ever seen.

Starkwell: That’s a pretty big category man.  Hard to remember them all.

Lovelock: I’ll certainly remember that one.

Lovelock: AT least they got good weather…

Lovelock: THAT’S IT.  The day is ruined.

Starkwell: Yeah, the rain did it.

Lovelock: I feel like I should have been found a way to squeeze a Billy Idol reference in here somewhere.

Starkwell: It’s probably for the best.

[The Bride, armed with a chainsaw and a recently ‘made-more-sexy-with-a-slit-down-the-side’ wedding dress, goes in to find her Groom, with the Best Man at her side.]

Starkwell: In case you’re bored, have some eye candy!

Lovelock: I’m not.  But thanks.

There are some good kills, and enough gore to go around.  And it all looks pretty good.  Eventually they are reunited and make it out alive, thanks to the priest who performs some sort of mass exorcism over the speakers.  Hooray!

[Somewhere out on the grass, Bride is bitten, Groom chops off her arm to attempt to stop the possession.]

Lovelock: “Hey I wonder, would that work?”

[Groom picks up Bride and carries her out, and they get blown to smithereens by HASMAT SWAT Team.]

Lovelock: If they had done that to Elliot and E.T. in "E.T.", it might have been a better film.

Other than complaining for a little while about how she managed to stay conscious, upright and walking after having her arm chopped off with a dull sword, Starkwell and Lovelock seemed pleased.  Is it as good as the first two?  Resounding no.  Is it better than a million percent of the shit coming out in this, the most saturated of sub-genres?  Absolutely it is.  That’s maybe not a glowing review, but it’s still mighty positive, if you’re a glass half full kind of a dude.  In any case, Starkwell and Lovelock are screaming for the fourth and final film.
Documented by Kev D. and Posted at 09:45