Night of the Seagulls. 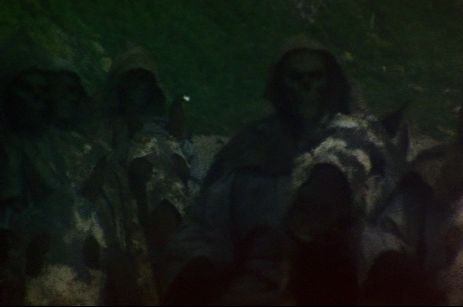 At last, I will present the final film in the “Blind Dead” series… Considering that they seem to have gotten progressively worse since the first film, Lovelock and Starkwell have lowered their expectations considerably.  This might help De Ossorio in turning this bitch around, in their eyes.

[A man and woman in a carriage, lost on the road, stop to check out a spooky house.]

Starkwell:  Why would you wear a veil and long sleeves if the chest area on the dress is so low that it shows nip?

[Templars show up, kill the dude, bring the girl back to sacrifice her, but first they rip her dress open and expose her boobs.]

Starkwell: How did you know that was coming?

Lovelock: Have you not been watching the other three of these with me?

[Templars tear out her heart and eat her.]

Starkwell: I never understand why the flesh eaters in these movies always start with the breasts.

Lovelock: Because the breasts are the most tenderest.

So it cuts back to present day, and essentially a doctor and his wife are moving to the town where the titty eating went on way back in them Dark Ages.  The locals don’t seem to like Doctor and Wife very much.  Doctor and Wife don’t seem to care much for the locals either.  Anyways, at this point, Lovelock and Starkwell are just waiting for things to go all ancient evil, and the Blind Templars to come back FOR BLOOD!

Lovelock: IT  TOLLS FOR THEE, BITCHES!

Lovelock proceeded to dance for the next ten or so minutes, excited that the Blind Dead have returned.  They look as creepy as always.  Then the Doctor and Wife see the townsfolk gathering near the beach all dressed in black robes, chanting and bringing a girl all dressed in white… I assume for sacrifice.  I mean, they even tie her up to a rock.  It's all very metal.   The music too.

Starkwell: So… The good doctor sees that and just thinks “don’t worry honey, it must be some kind of local custom… villages are weird”?

[Templars show up on horses, murder the girl.]

Lovelock: Hooray!  Sacrifices, blind dead and DAY-FOR-NIGHT shots!  All is well in Lovelockland!

Then some girl shows up at the house, screaming, saying that she doesn’t want to go!  People THEN show up to pick her up and, the doctor gives her a sedative and lets her go with them.  She gets tied up at the beach.

Starkwell: “Here take this shot and feel better and now… yup, just go with the creepy people dressed in black robes… I’m sure they know what’s best for you.”

Lovelock: Wait… why are they untying her?  Are they letting her go?

[The Blind Dead bring her back to their layer, immediately tear open her dress and expose her breasts.]

Starkwell: I’m starting to feel like maybe, just maybe, the director is going out of his way to show some'a 'dem boobies.

Why in the Hell is this called “Night of the Seagulls”?

[Village Idiot helps the Doctor and Wife get to the bottom of this whole ‘beach ritual’ thing.]

Starkwell: The first rule of “Night of the Seagulls” is apparently to be boring as balls.

[Villagers throw Village Idiot on a pile of rocks, leave him for dead.]

Lovelock: He done broke the rules.

It appears that right before the Blind Dead appear to grab their offering from the beach, a flock of seagulls is always seen.

Lovelock: This movie makes me want to run.  Run so far away.

Starkwell: Why do they bother clothing the Sacrifice Girls?  You’d think they would know all about the Blind Dead’s breast obsession by now.

Lovelock: "Come with us young lady. Leave your clothes.  You won't need them where you're going."

Village Idiot tells them that the seagulls are the damned spirits of the dead sacrificed girls.  The Doctor decides he wants to help tonight’s intended sacrifice.  He runs out onto the beach, frees the girl and they run away with the Blind Dead hot on their heels.  Well… maybe not hot.  More like tepid.  They actually lose them super easily.

[Blind Dead EVENTUALLY show up at their house and start bashing down the door… they start barricading the door.]

Starkwell: Why did they wait until the Templars showed up to start barricading the door?

True to form, the Blind Dead are the slowest killers in the history of film.  They actually seem even slower than usual in this one.  Maybe it’s just the film's boring nature that is making it seem slower.

Lovelock: The good news is, the Blind Dead still look great, and the music still rules.  The bad news is, EVERYTHING ELSE ABOUT THIS MOVIE BLOWS.

As if the film doesn’t move slow enough, a lot of this is shown in slow motion.  Anyways, the Doctor and Wife and Girl try to escape, they eventually destroy some kind of monkey idol in the Blind Dead’s castle and they all start falling down and shooting blood from their eye sockets, which is kind of an anti-climactic and lame way to end such a wonderful group of characters.  This film proved that the fourth film was indeed the third film in the series that quite honestly should not have been made.
Documented by Kev D. and Posted at 20:00