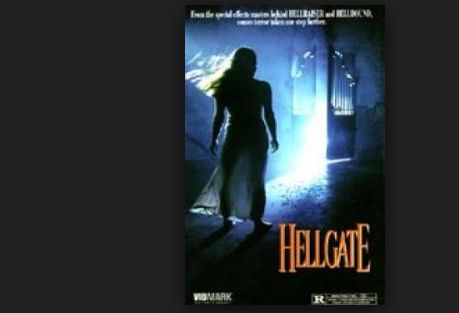 There ain’t a whole lot out there about “Hellgate”, probably because it’s a bad movie.  But from a director who started his career with “Blackenstein”, what can you expect, really?  Starkwell and Lovelock don’t really know what to expect.

[One dude and two girls sit around in a cabin telling scary stories, one starts to tell the story of the Hellgate Hitchhiker, and then it cuts immediately to the pansiest looking biker gang EVER biking along the highway to REALLY lame ‘50s music.]

Starkwell: Are the beards and denim vests supposed to make them look threatening?

Lovelock: It would work better if they had something on under the denim vests.  And weren’t so scrawny.  And that there weren’t two guys on one bike hugging each other so closely.

The quality of the picture and sound is atrocious.  The mixing is so bad that you can barely hear the dialogue over the shitty doo-wop music.  Not that you’re really missing out.  Anyways, the biker gang goes to a diner grabs one of the waitresses, rips her skirt off and pulls her out in her panties.  It cuts awkwardly back and forth from the “teens” telling the story and the actual story, being shown.

Starkwell: We already know that she is telling the story.  They don’t need to cut back to the cabin.

Lovelock: What?  And miss that great acting and dialogue?

Luckily for Starkwell, and the waitress, the bikers do little more to her than pick her up wrestle her a little, and chase her around in her underwear.  BUT THEN… The girl’s father shows up (luckily) and throws a hatchet at the gang leader’s head while simultaneously getting the gang leader’s chain wrapped around his arm.  It all happens in slow motion.  Lovelock and Starkwell both sat motionless and quiet, not sure whether to laugh, cry, or leave the room and shut off the NETFLIX MACHINE.  Oh, the daughter dies.

Lovelock: Can we just take a moment to talk about how amazing the father’s mustache is?

Starkwell: You just took a moment.  So why bother asking?

[The other girl starts telling another story (I stopped paying attention, so I don’t know what the relation to the first story is), and it involves a scene where some old guy swings at a toy bat (like a flap flap flying bat, not baseball bat) with a shovel.]

Lovelock: Watch out for that fake bat!  It’s alive!  It appears to be held up by a wire of some sort!

Starkwell: I think it’s SUPPOSED to be a real bat.

[Old Guy finds what looks like Kryptonite in the cave, which shoots a light beam at the dead bat and the bat comes back to life.  Turns out he works for the father, he brings him the magic rock and tells him about the bat.]

Starkwell: Yeah.  Cuz it worked out SO WELL in “Pet Sematary”.

Lovelock: Maybe they never saw it.

[Old Man zaps a dead goldfish, and then it turns into a huge slimy puppet, and then explodes.]

Starkwell: So he sees that happen and then decides, “LET’S TRY IT ON A TURTLE”?

Lovelock: Why isn’t the turtle exploding?

Starkwell: WHAT IN THE FUCK.

Starkwell: So he sees all of this happen and then IMMEDIATELY decides, "Let's go to try this on my long since dead daughter.

Lovelock: Why is the daughter frozen in carbonite like Han Solo?

Starkwell: Why is it when the father imagines his daughter, he pictures her running in a field in a dress, and like, the straps of the dress are falling, and you almost see her boobs?

Anyways, the questions continued for a while.  We got to see zombie daughter for the first time.  Apparently she has super powers involving making her eyes glow and draining Matt’s car battery.  Matt is a guy on his way to the cabin to join the others.  At some point it just jumped from the old story back to the present day… I think.  Unless there is time travel involved.

[Matt picks up zombie girl Josie and brings her to Hellgate, which is apparently an amusement park full of dead people that the father has brought back.  Behind this amusement park, is her mansion.]

Starkwell: Why did the director use SO MUCH SMOKE?  Seriously, half the budget must have gone to smoke machines.

Lovelock: The other half went to the shitty doo-wop band that scored the film.

Starkwell: Why did they get rid of the father’s mustache?

Lovelock: Probably so we would know that it’s actually the present day.

[The father chases Matt out shooting laser beams out of his magic rock.]

Lovelock: You might want to leave out the part about the waitress you were hitting on and the whole Josie boob groping-kissing.

[Matt actually tells her about Josie, minus the boobplay, she gets momentarily upset, but then they bone… again.]

Lovelock: Did you not see the flesh eating exploding turtle and the melting farmer?

Starkwell: That’s not what I mean.

Matt decides to tell everyone that he met the “Hellgate Hitchhiker” and says he wants to help Josie, that she might be in trouble.  Starkwell thinks he’s just under the spell of the boobies.  Anyways, the rest of the dialogue was hard to hear over the painfully annoying doo-wop music.  Eventually Matt and his girlfriend go exploring and come across a zombie member of the old biker gang.  There was a short fight.  It was made longer by the inclusion of (once again) tons of slow motion.  After the short fight, Matt and the zombie biker have a civilized conversation and Matt tells him he’s going to Hellgate again tonight.

Starkwell: I wish I could say this movie had some sort of message… but it doesn’t.

Lovelock: I think the people who made this film are the bad guys.

[Matt takes them deeper in Hellgate territory on a quest to find Josie.]

Starkwell: What’s his game plan?  What happens when they find her and Josie is like “remember when you kissed my boobies”?

Lovelock: I guess he ditches Pam and resumes the booby fondling activities.

Anyways, the father wakes up all the zombies and they start closing in on the Get Along Gang.  It’s pretty tame, but at least there’s a decent number of them.  The faces are REALLY blue, which is either insane, or a nod to “Dawn of the Dead”.  Either way, it kind of gives them a vintage look.  Starkwell approves.  Lovelock wants to see them eat people.  It doesn’t happen.  Eventually the non-Matt guy and his girl die and become zombies, and I think there’s like a cabaret show at one point in a zombie saloon that ends with slow motion dancing and a girl being choked out… I mostly fell asleep.  This is a real mess.  There is a pretty sweet stunt at the end though where a topless Josie is thrown out of a window (in slow motion of course) that made Lovelock applaud momentarily as well as a car crashing into a building and exploding and a flaming dude walking away from the wreckage.

Lovelock: So the blonde biker guy is the hero?

[The father tries to zap them in their car, but the beam hits the rear view mirror, and bounces back towards him and explodes a building.]