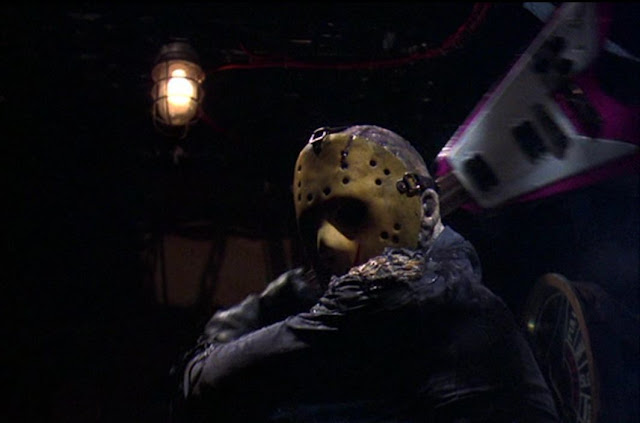 It took them seven movies to realize that Jason killing people in the woods was totally stale.  So they brought in writer-director Rob Hedden, who had written a few episodes of “MacGyver” and afterwards went on to direct some episodes of “The Commish”.  So yeah.  The film starts off in the complete opposite direction of any of the other films, with some dude narrating about , claustrophobia, and all to the swinging sounds of really shitty music from the late eighties.  This is gonna be one nutty ride.  Kane Hodder reprises his role as Jason, which is TEH AWESOME.

[Teenage couple gets naked on a yacht in .]

Starkwell: Umm… how would they get that yacht get on ?

Lovelock: I’m still trying to figure out which of those two kids is the girl and which is the boy.

Starkwell: It was a different time.

Lovelock: I was pretty sure I had it figured out, but they just showed his bottom half and I swear he’s wearing granny panties.

Anyways, Jason climbs on board and kills them, so discussing the androgynous nature of teenage boys’ style in the late eighties has become somewhat pointless.  Now the film cuts to a big boat that is apparently bound, and full of high school kids.  I’m guessing it’s like a field trip.

Starkwell: The geography of this film is insane.

[Jason climbs on board.]

Lovelock: Don’t ask questions if you know there aren’t any answers.

Starkwell: I thought Jason was supposed to take … not SHITTY BOOZE CRUISE FULL OF TEENAGERS.

Starkwell: These movies tend not to keep anyone around for very long.

Starkwell: These movies tend not to keep my interest around for very long.

Jason racks up the kills.  In a matter of minutes, the body count is climbing high.  Still, somehow, the pair look bored.  We’re halfway into this thing, and we are no closer to , which makes the film’s intro even more out of place than it already was.  Like the previous film, Starkwell feels that introducing characters for five minutes with the sole purpose of having them die is a little bit excessive.  Lovelock responded with a jump kick exclaiming “EIGHTIES EXCESS TO THE MAX!!!”

[Film Nerd is thrown onto some kind of control thing and he explodes.]

Lovelock: Guitar Kill is number one, but that’s a close number two.

Starkwell: This movie is DEFINITELY one big number two.

Anyways, about twenty kills and three or four nonsense hallucinations later, the surviving members of the field trip end up on a row boat, in a storm and row themselves to .  Really.

Starkwell: Of course the dog survives.

[Then the gang gets mugged and Jason kills the two thugs right before they manage to rape Main Character.]

Then Lovelock and Starkwell laughed for ten minutes at a rooftop fist fight between Jason and one of the teenagers.  Then Jason punched the kid’s head clean off and it flew off the roof and Lovelock laughed so hard he passed out.  Starkwell shot green tea out of his nose.  Then the rest of the gang got in a cop car and main girl drove it into a wall and exploded her teacher.  Eventually Jason drowns the Uncle guy in a garbage can full of green slime and the movie just gets even more dumb as Jason follows the two survivors across the city.  Both Starkwell and Lovelock agreed that Jason definitely did not take , nor was this film any good.

Starkwell: I love the idea that in , no one even gives a second look to a huge slimy decomposing dude walking around wearing a jump suit and a hockey mask.

Lovelock: Also, why would Jason even be chasing them?  Look around dude, there are so many more people you could be killing!

In the end, Jason is melted in a sewer which is, for some reason, flushed with toxic waste every night. And then lightning strikes the Statue of Liberty.  And then Jason turns back into a little kid.  And then the dog finds them.  Fuck you, film.
Documented by Kev D. and Posted at 00:15