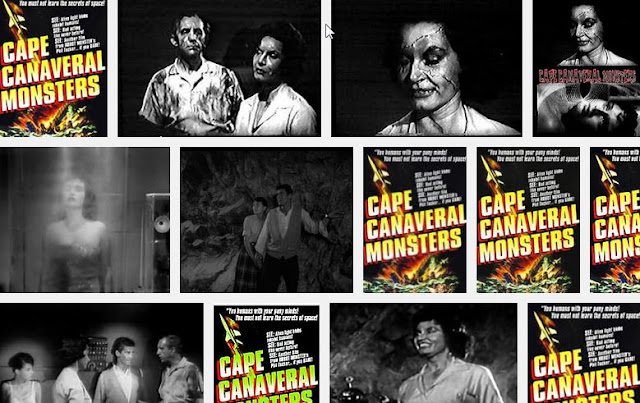 There ain’t a whole lot out there about this movie.  What I have read about it, leads me to believe that I shouldn’t expect much.

[Couple hangs out on the beach, lights flash on a rock.]

Lovelock: Were those lights supposed to be something?

Starkwell: The music leads me to believe that 'yes'…

[Two lights flash in front of their windshield as they drive away, they crash… into… nothing?]

Starkwell: How did the guy’s arm end up in the back seat?

Lovelock: I’m still trying to figure out what the fuck is going on.

[The music is completely insane and loud.  Credits play.]

Lovelock: So… were they possessed by those lights?

Starkwell: I guess.  Holy Hell, this music needs to stop.  My head already hurts so much.

We see laboratory shots, rockets flying, plenty of stock footage, and shots of people looking surprised.  Then the rocket blows up.

Lovelock: I love that they put huge glasses on an actress and assumed that would be enough to make her look like a scientist.

Starkwell: She looks more like a scientist than that old guy.  He looks like a homeless man.

This movie is incredibly hard to follow, partly because it is incoherent and makes no sense, and partly because the director chooses to occasionally use camera angles that I assume are supposed to be “FIRST PERSON VIEW”, but really do little more than give the audience motion sickness.  Lovelock imagined what this would have looked like in a movie theater, and then he puked.  Starkwell wondered if this camera trick was ahead of its time.  Then he puked for inadvertently complimenting the film.

[We see the possessed zombie alien people, being chased by dogs, and they pull his arm (back) off.]

Starkwell: If they have the technology to travel across the universe, and inhabit the bodies of other lifeforces… you’d think they’d be able to do a better job sewing an arm back on.

[The aliens decide they need a new arm, so they need to find a living arm to replace his stump with.]

Starkwell: Why wouldn’t he just possess a new body entirely?  Why would keep the broken torn apart one?

[Lovelock had nothing to say, because after he vomited, he fell asleep.]

Apparently the aliens are there to prevent humans from figuring out how to space travel.  At one point the alien woman said “PERFECTLY CLEAR” and looked directly at the camera.  Starkwell laughed out loud so hard it woke Lovelock up from his slumber.  The missile explosions are actually pretty impressive, considering how shitty balls the rest of the film is.

Lovelock: Seriously, why did they bother have him lose an arm?  It would be one thing if the actor only HAD one arm, so they wrote it into the story, but instead, we get a lame ass dude with an arm tucked into his pants.

Rather than focus on their mission, or how they will prevent man from traveling through space, the aliens spend the bulk of their time finding healthy specimens to farm body parts from.  It’s all much lamer and more boring than it sounds.  I think the aliens teleport two humans to their planet, for their hometeam scientists to examine.  Did I mention that there’s a bad actor playing a hillbilly who waves around a shotgun wearing full body onezee pyjamas?

Lovelock: Detectives ALWAYS have mustaches in these old movies.

Eventually, and thankfully, the film ends.

Lovelock: They were just trying to get home.  Like E.T.

Starkwell: No.  No they weren’t.

Lovelock: Weren’t they?  Geez… maybe they weren’t.  What the heck was this movie?

After all is said and done, the humans blow up the cave where the aliens had their lab, the cops drive away and then you hear screaming and a crash and we see the lights again.  Do I smell a sequel?  No.  Not ever.  Thankfully.
Documented by Kev D. and Posted at 08:45