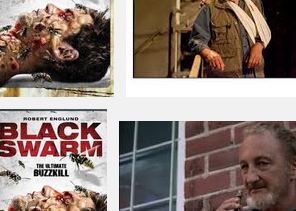 A ‘made-for-tv’ movie starring Robert Englund?  What could go wrong?  Answer: a lot.  The director’s last name is ‘Winning’, which is ironic since I feel that Starkwell and Lovelock will be losing an hour and a half that they won’t ever get back.  The good news is, it was filmed in and around Lovelock and Starkwell’s hometown.  The bad news is, the last movie they watched that was filmed there was “Zombie Nightmare”… so… yeah… sentimental geography ALONE can’t hold up a movie.

[Exterminator guy sets fire to a wasps’ nest with his blow torch and it blows up.]

Lovelock: Why is he so afraid of computer generated wasps?

Starkwell: Were we supposed to be able to read what that newspaper headline said?

Lovelock: Did the Exterminator die?

So we are introduced to some woman named Jane who is moving with her daughter from the Big City to rural Black Stone, where she grew up.  I guess Jane and Exterminator have a history together.  The story unfolds relatively quickly, and we see people acting zombie-ish, and they all seem to have big sting marks on their heads.

[Robert Englund has a conversation with Jane’s daughter, turns out he’s the town bee-keeper.]

Starkwell: A couple of things here.  Number one, the town doesn’t look very rural.  If it’s not a rural town, then, well actually, regardless… number two, what the fuck town has a bee keeper?  Number three, what does the bee keeper have to do with magic wasps?

Lovelock: ALl that matters is that, if there WERE a bee-keeper in most towns, you know they'd hang around a local convenience store blowing a dog whistle and handing out peaches to little girls.

[The dog whistle never plays a role of any kind.  I have no idea why it's there at all.]

Turns out that Exterminator had a twin brother who died.  That twin brother was Jane’s husband.  So there’s your history.  Also, I think that’s what those flashing headlines at the beginning were.  Oh also, there’s this old blind woman that knows them all.

[Squatter breaks into Blind Woman’s garage, looks into a hole in the wall, and then is stung to death by super wasps.]

Lovelock: That’s why I never look into holes in walls.

Lovelock: Plus I'd hate to end up in a "Porky's" type of situation.

Lovelock: Ah yes… “STRANGLING!  When you don’t have the budget for cooler looking deaths!”

Exterminator works with some kind of Science Girl that they brought in to investigate.  I don’t know who “THEY” is, or why they knew to bring her in.  I should also mention that the film moves slow enough to have gotten at least two “BORING!”s out of Lovelock, and several yawns from Starkwell.  They seem more interested in trying to see if they recognize any locations than they are in following the story.

[Englund lives in a camper that is parked right next to Blind Lady’s house.  Apparently there is a trap door inside the camper that takes him into his secret BEE lab.]

Starkwell: He’s right there on a busy residential road… how would he have been able to… and without running into anyone else’s basement… or pipes… or wires… or… FUUuuuuUUUUCK you.

Lovelock: Not to mention, he’s a bee keeper, not a wasp keeper…

Anyways, shortly after Young Daughter sees Englund leave his camper, she decides to break into it, she immediately finds the secret lab, and then has fun (?) making funny faces at the killer wasps.  It’s actually even dumber than it sounds.  I think Lovelock said “man, I can’t wait for you to be dead”.  Then it cuts to a shot of a street sign that reads “Elm St.”  Robert Englund.  Elm Street.  Get it?  Starkwell told the movie to “fuck you” again and left.  Right after he left, there was a scene where a zombie priest shot killer wasps out of his mouth (somehow).  So yeah, you could say he left just in the nick of time.

Lovelock: How did they suddenly get into a corn field?  They were just in the Blind Woman’s suburban freakin’ house.  DUMB.

Lovelock: No one says out loud what they are typing as they type it.  It never happens.

Lovelock: Wait… she was married to a guy who died, and now she’s going after sexy complications with her dead husband’s twin brother?  Not cool.

Starkwell: Well, at least the daughter can just pretend that her dad is still alive.

It turns out that Science Woman is working for the government, and this is like, a government plan to create a super wasp weapon, or like, super wasp soldiers.  Robert Englund is actually a good guy in this… which makes references to Elm Street even more stupid.  We fast forward through the remaining half hour of the film.  It doesn’t look like a whole lot happened.  Then there were some helicopters and a really shitty looking CGI ‘splosion, and Englund gets dead.  The wasps survive.  I think.  Starkwell said it best when he told this movie to "fuck you".
Documented by Kev D. and Posted at 12:25