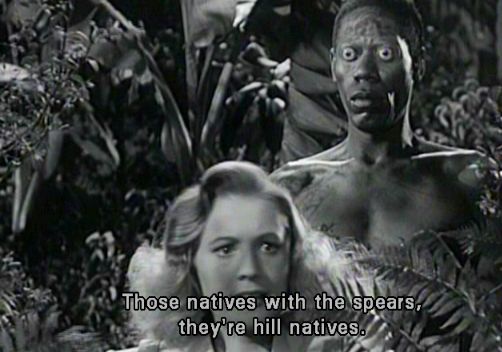 While one could argue that a lot of early zombie films have some elements of comedy in them, whether intentional or not, Gordon Douglas’ 1945 “Zombies on Broadway” sets out to be just that, from start to finish, a zombie comedy, starring the comedy duo of somebody and somebody else.  Well I have a comedy duo of my own that I intend to put to work, by having them watch the very film I just mentioned.

[Gangster advertises his new theatre that features a real live zombie!  Opening this weekend!  Turns out our Comedy Duo, hired to provide the zombie, is actually trying to pass off a regular dude as a zombie!]

Lovelock: This is unrelated, but the expression “hate you like poison” is pretty tits.

After visiting an old scientist, the Duo decide “screw the Gangster” and decide to run away to California, instead of trying to figure out how to get him a zombie.  But Gangster catches them, and so, they’re going to San Sebastien to find a guy named Dr. Renault and provide Gangster with a zombie for his show!

[Music Man of the Island plays a song on his guitar and sings to the Duo about the island.]

Lovelock: I can’t help but wish the whole film was in song.

Starkwell: That would get a bit annoying.

Lovelock: Man, if Lugosi sang his lines, he’d be even hammier!  I think I’d die.  Of happiness.

We see our first zombie, and he’s terrifying.  It’s a local native with crazy bug-eyes.  Starkwell and Lovelock aren’t sure if they are his real eyes or not… but either way Lovelock just dry-heaved.  The Duo meet a Dancer Girl and team up with her to find a zombie.

[Zombie watches the Dancer get changed through her window.]

Lovelock: Maybe that’s how he got his bug-eyes… by being a Peeping Tom and peeping REAL HARD.

As if Lovelock and Starkwell weren’t already massively uncomfortable from the basic racism on display here and there, one of the Comedy Duo tried to blend in with the crowd of natives by smearing grease all over his face, creating the infamous Black Face.  Lovelock asked Starkwell “is it racist to watch this… or?”  The Dancer was captured by a zombie and brought to Lugosi, who wants to make her go all zombie.  There was a moment where Lugosi, talking about the doctor who sent the Comedy Duo to the island, said very bluntly “I HATE HIM”.  I only mention the line because Lugosi delivered it with such ferocious passion that Lovelock and Starkwell re-watched it five times.

[Lugosi and his Assistant make the Duo dig their own graves.]

Lovelock: You would think they would catch on when the guy asked him to lie down so he could measure the size of the whole to dig…

Starkwell: Well, now where’s the humor in that?

Then Lugosi kidnaps the fat one of the Duo, Fat Mike, and turns him into a zombie.  He tries to turn the other guy, Jerry, into one as well, but he gets away thanks to the Dancer Girl, a little helper monkey and, eventually, the zombie Kolaga, who for some reason turns on his master.

[Jerry, Dancer Girl and the Monkey sneak past the Natives by pretending to be zombies after seeing Fat Mike walk past them no problemo.]

Lovelock: The little monkey had his arms up!  Oh now that’s just the most adorable thing ever.

Starkwell: Wait, so Fat Mike is just a zombie now… like forever?

[Right before the show, Fat Mike turns back into a regular human when he sees a girl bending over.]

Lovelock: So that’s all it takes?

Starkwell: If that were true, then wouldn't Kolaga have un-zombied when he watched the girl change earlier?

Lovelock: If logic was something worth worrying about... yes...

Anyways, apparently someone lifted the syringe with the zombie serum off Lugosi before he got axed because at the last minute Gangster Boss gets injected and turns into a zombie!  Just in time for the show!

Lovelock: Sharing needles is not a laughing matter.

Starkwell: The more you know.

Lovelock: At least Dancer Girl just has to bend over or show some skin to turn him back.