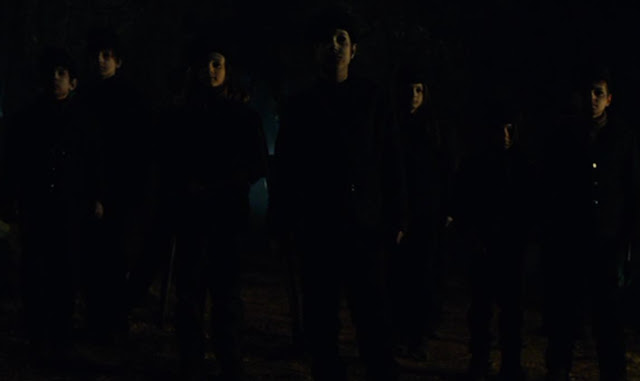 For a short period of time, it seemed like THE thing to do in “scary” movies was to have creepy kids doing creepy things.  I’m not sure when and where the trend started, but it seems to have been a lazy and fashionable way for writers to slip in some added creepiness… have a ghost kid singing some creepy lullaby with lots of reverb.  This movie puts all of its eggs firmly in that basket, in that the main antagonists are to be a group of undead children.  The director seems to have a career that started in the eighties and ended with this movie, which is really not a promising sign.  Unless it’s so good that he was like “I’ll never top that” and then retired.  We’ll see I guess.  After four hundred previews, the movie finally starts.

[Children are worked like slaves in a coal mine.]

Starkwell: Are you for real?

Lovelock: It’s only a matter of time before they start taking white collar jobs too.

[Mine collapses, kids all die.]

Lovelock: Well, not THOSE kids specifically.  But other kids maybe.

We are then introduced to a widow and her two daughters.  They are moving into her late husband’s family’s house, out in the sticks.  It’s creepy as balls, and the store owner tells them “ain’t no one been up there in a long time.”  It only makes it seem creepier.  And then he was like “WE DON’T DELIVER FOOD THERE.”

[They get to the house, the door is open, the lock is broken, no electricity, no water.]

Lovelock: Wait, so they just go in and let the little girl run around?  Zombies and ghouls aside, what about like racoons and bears and shit?

The little girl sits in one of the bedrooms and there are old dolls and stuffed animals and actual rats, and the family is super sad and depressed.  The daughters hate it and the mother essentially looks like she hates life.  It makes one wonder why, if you’re already sad, you would leave everything behind and go to a creepy, run-down house in the middle of nowhere.  Starkwell and Lovelock stayed pretty quiet, as the mother has one of the scariest nightmares ever about a miner kid driving a pickaxe through her gut.

[Creepy sounds of child whisper can be heard.]

Lovelock: Using incomprehensible reverby child whispers is kind of like using clowns… It’s a little bit of a cop-out.  An easy way to get scares.

The mother doesn’t seem to notice that people keep hinting at the fact that there is something seriously wrong with this house.  The plumber said “I’m sure as Hell not sticking around here come nightfall.”  And Lovelock laughed.  Anyways, she’s clearly oblivious, since she didn’t notice that her younger daughter, Emma, just left the house and headed towards the woods and found the old mineshaft.

Lovelock: Mother of the year.

[Emma and Mother are now lost in the woods.  At night.  And they can hear children’s voices.]

Lovelock: If I heard voices and my daughter said “don’t worry it’s just Mary and the others”, I think it would only make me more afraid.  MUCH more afraid.

Anyways, then the plumber dies at the hands of a Zombie Kid.  Guess he didn’t leave early enough.  The mother and daughter end up at some creepy shack and decide to go in!  They meet a creepy dude named Mr. Hanks, who once again says weird cryptic shit that alludes to the fact that BAD SHIT WILL HAPPEN IF THEY STAY AT THIS HOUSE.  The mother just stands by her idea to stay there.  Then she lets her older daughter go out with random townies that she just met and knows nothing about.

Lovelock: Mother of the decade.

[We see the whole lot of Zombie Miner Kids.]

Lovelock: Sweet!  Too bad they don’t have like guitars and shit.  In those outfits they’d make a rad Black Metal Collective of some kind.

Lovelock: Never too young to start being metal.

[Teenage Daughter hangs out with townies, listen to terrible music.]

Lovelock: The Black Metal Zombie Kid Collective's music wouldn't sound anything like this shit… the way I picture it, it's more like “Sunn 0)))” meets "Cathedral" being sung by “Alvin and the Chipmunks”, mixed with just a small dash of hipster shit like “Arcade Fire”.  And they mostly sing in Norwegian.

Starkwell: You realize that you’ve now made up an alternate reality in your mind wherein this band is real?

Lovelock: If that’s wrong, then I don’t want to be right.

Then the Zombie Kids violently axed a pig to death and ate it, and Lovelock did a jumpkick.  There’s like a rich asshole dude who wants to build a ski resort on the mountain, and we slowly get more details about the Kids.  Lovelock wished it moved just a bit faster, but agreed with Starkwell that it was effectively creepy.

[Zombie Kids hack the shit out of one of the teens.]

Lovelock: Speaking of irresponsible parents, it must be messed up to let your kid be in this movie and bludgeon a dude to death and then eat him… even if it’s make-believe… the gore is real looking enough that I’d assume the actor kids can’t possibly come out of this well adjusted.

Lovelock: Holy poopoo! Did you see the one kid eating the guts!  Hee hee hee!

[Obviously, the Mother loses track of Emma, again, and takes her other daughter into the woods.]

Lovelock: Mother of the century.

Anyways, it’s the rich asshole the kids are after, because his ancestors are the ones that killed the kids and buried them in the mine in the first place.  So eventually they axe him to death and the Zombie Kids go away… FOR NOW!  The movie resolves itself and ends really quickly.  It’s like all of a sudden the family is California bound and intent on pretending that nothing ever happened.  It’s not a bad film, but there’s definitely something missing.

Starkwell: Those girls are going to need loads of therapy someday.

Lovelock: Mother of the MILLENIUM FOREVER INFINITY.
Documented by Kev D. and Posted at 08:06