Virgin Among the Living Dead. 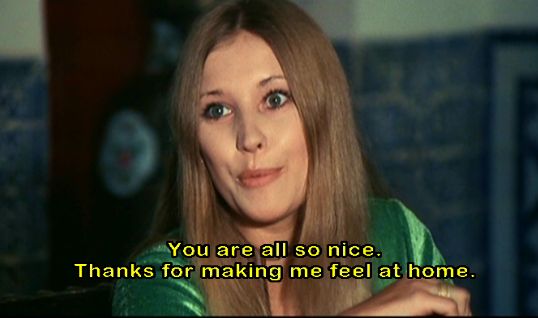 Often referred to by it’s other title “Christine, Princess of Eroticism”, this Franco cult 'classic' is almost certain to make Starkwell leave and Lovelock scratch his head.  And yet, both seem so eager and excited to watch the movie.  Such is the mystery that is Jess Franco’s body of work.  The opening credits are as schizophrenic as any I have ever seen.  I should mention that the film is in French.

The terrible acting and badly overdubbed French dialogue has informed Starkwell and Lovelock that the young Miss Benton is heading to Monteserate’s Castle.  Apparently, no one ever goes there…  Locals say that the people there are dead.  Not haunted, not just weird people, straight up dead people.  I’m sure we’ll soon find out what the deal is.  First she is going to stay the night in a shitty hotel.

[Miss Benton has a nightmare, squirms in bed, wakes up.]

Lovelock: Of course she walks around the hotel in her silky transparent underwear.

Starkwell: That's his next guideline, generally.

Apparently Moneserate’s Castle is actually her family’s castle… so she is very much intent on still going there.  She doesn’t believe for a second that everyone’s dead.  Then she gets a ride out to the castle, and there’s a long scene where Miss Benton waxes philosophical.  It’s her voice reciting a nonsensical poem while shitty jazz fusion plays over canned jungle sounds.  Lovelock almost pissed his pants.

Lovelock: That is the worst fake piano playing I’ve ever seen.

Starkwell: What the Hell is going on?

[Black Haired woman sits alone in a room at a desk drawing crosses in red paint.]

[Some woman dies, they have a funeral, Uncle Howard sings, the rest of the family sings along.]

Starkwell: WHAT THE HELL IS GOING ON?!

Lovelock and Starkwell speak French, and yet I still think something is being lost in translation.

Lovelock: Of course she sleeps fully naked.  Over the covers.

[The weird mute guy groans at Miss Benton, or Christina as she is now being called, and waves a dead rat in her face, she runs back into her room.]

Lovelock: Good thing she was naked before it all happened.

Starkwell: I bet the dead rat waving and groaning thing usually works on the naked ladies.

Anyways, we get some back story about Christina.  She never knew her Mom or Dad.  The people of this castle are apparently her Dad’s family, and she’s expecting inheritance of some kind.  I guess that’s why she’s there.

[Christina goes for a walk in the forest.]

Starkwell: She certainly likes wearing green.  She camouflages with the forest.

Lovelock: She isn’t all that big on wearing bras, on the other hand.

[She finds a pond, so obviously she gets naked and jumps in.]

Starkwell: Is something going to happen in this movie, I mean other than Christina walking around in various levels of undress?

Lovelock: "Virgin Among the Living Dead"?  More like “Boredom Among the Sleeping Audience.”

Then Christina goes back to the castle, gets a slap in the face from Uncle Howard, finds dead bats in her bed, and then walks in on Clemenze (a girl) and The Lazy-Eyed (?) Cousin (also a girl) having some kind of lesbian pube trimming session, complete with sucking blood from a fresh cut on the boobies.  The scene goes on for like three whole minutes.

[Christina wakes up scared and tries to escape the castle, in her nightgown.]

Lovleock: She is certainly well equipped for the jungle, what with the whole being naked and confused all the time.

Starkwell: So let me get this straight… She sees one of her cousins or whatever nakedly sucking booby blood from an equally naked cousin… and she goes downstairs to eat some dinner… but a little nightmare sends her running for the jungle?

[Lawyer comes and reads the will, everything goes to Christina, but she tells the weirdoes that they can all stay.]

[Uncle Howard plays piano and Clemenze squirms around half naked on the floor.  This lasts several minutes.]

Starkwell: If you have to ask “WHICH ONE” when someone mentions a scene where the main character wakes up naked in bed, chances are that you have too many.

Lovelock: True… but this time she wakes up to find a huge black dildo/vase on the ground.  It has balls!

[Christina smashes the cock vase, and this apparently is going to bring a curse on her head.]

Lovelock: That’s why I never smash cock and ball vases.

Starkwell: Do you have a cock and ball vase?

Lovelock: No, but I think you can get them at the Pottery Barn.

Starkwell: Was it really necessary for her to get naked right before he strangled her?

Lovelock: To get the part?  Probably.  I can’t imagine what Franco put these girls through.

Starkwell: That didn't make any sense.

Anyways, Christina keeps seeing her dead dad, and starts following him around, because CLEARLY that's what you do when you see dead people.  But then Uncle Howard and the gang show up to fulfill the curse… The curse of the big black cock and balls!  Apparently to fulfill it, they need to tear her clothes and gnaw at her thighs, for a while.

Lovelock: Not that I want them to be, but why wouldn’t the dudes ever be naked too?  I mean, if this is one big naked fest...

Starkwell: The fake cock and balls of the vase was enough for me thanks.

Then there was some strange sacrifice scene involving naked women straddling each other and her undead dad leaking blood out of his mouth.  Then Christina woke up delirious in the hotel from the beginning.  After that I think it like flashed back to the night before… I think.  The whole family, Christina included, drowned themselves in a pond out behind the castle and claimed to be returning to the river Styx.  Definitely a happy ending.
Documented by Kev D. and Posted at 07:30