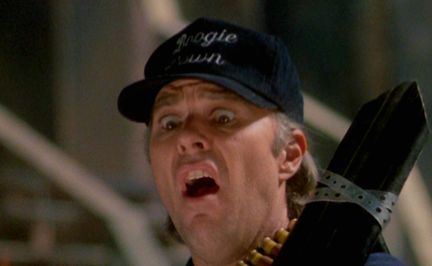 Released nearly a decade after the first film, and having only directed “The Beastmaster” in between the two films, Coscarelli continues his now “cult classic” saga that is “Phantasm”.  Starkwell and Lovelock are on a quest to see if Coscarelli lost his touch at all, given the time lapse between the two films, and the in between insanity of “The Beastmaster”.  The budget of this film is considerably higher than that of the first film.  This alone should help with his, you know, touch.

Starkwell: Given how many budget and indie films we end up watching, it’s weird seeing the “Universal” intro.  It feels like there’s a mistake or something.

Lovelock: I’d be pretty tall too if I had heels like that on.

We are introduced to Blondie who is narrating her flashback as she goes through her diary.  We see some zombie dwarves trying to kill Mike and Reggie.  Reggie fights them most valiantly, and eventually blows up his house with an explosion that rivaled the death star.  Tall Man gets away.

[Reggie and Mike jump out of the second floor window as the house blows up.]

Starkwell: Well, there goes a good chunk of the budget.

Lovelock: I assume you mean on the exploding house… because those zombies look, well… yeah.

After the flashback, we cut to present day, where Mike is all grown up and being released from a mental institution.  As he heads home with Reggie, he has a vision and realizes that Reggie’s house is about to blow up.  As soon as they arrive, it does.

[Reggie’s family is dead, all in the recently blown up house.]

Starkwell: You think that’s the same house, just from a different angle?

After a ridiculous funeral scene where Mike’s hair is slick back like some kind of stupid idiot, he and Reggie start their mission to find the Tall Man.  Then there’s an even more ridiculous WEAPON PREPARATION MONTAGE.  Lovelock feels a montage just doesn’t feel right without bad eighties synth rock and said “it just feels like a missed opportunity here”.  Then Reggie and Mike start hunting.

[Reggie and Mike, out hunting for Tall Man.]

Liz, the Blondie with the diary, also sees the Tall Man, and knows of his evil.  Her grandfather dies and somehow this is going to bring on more Tall Man madness.  I think both Lovelock and Starkwell are confused as all Hell, but still, can’t look away.

Lovelock: I never know what’s actually happening versus what is simply in their minds.

Reggie picks up a hitchhiker while Mike is sleeping.  Apparently she’s a dead girl from Mike’s visions.  They pull over so they can talk about it.

Lovelock: Rule number one, never talk to another man while they’re peeing.

[Reggie mentions that he would like to bone hitchhiker girl.]

Starkwell: Jesus… he just buried his wife and kids!  And she’s half his age!

Starkwell: Yeah, I guess life on the road is hard.

More stuff happens.  Eventually the crazy priest from the funeral and Liz both end up at the Tall Man’s lair.  There, we see THE SPHERE make its triumphant return.  It kills the shit out of the priest and Lovelock shot smoke out of his ears.  Then Liz beats up her dwarf zombie grandma, and eventually ends up in a house with Mike, Reggie and Hitchhiker.

[Hitchhiker and Reggie bone loudly and obnoxiously.  She literally rides him like a cowgirl and yeehaws.]

[Reggie and Mike have to leave in a hurry, because Tall Man took Liz.  Reggie promises Hitchhiker girl that “I’ll find you”.]

Starkwell: Wait, does he even know her name?  Do we?

Lovelock: Yeah, it was something stupid, like “Biology” or “Math”.

[After Reggie and Mike lose a car chase to the Tall Man, car blows up.]

Then they saw the Tall Man House in the distance, Reggie turned to Mike and said “let’s go kick some ass”.  Lovelock and Starkwell both burst out laughing for a few minutes.  I think Starkwell was the one that said “I’m not even sure if THEY believe it.”

[Sphere chases Liz and Mike, ends up killing one of the Tall Man’s goons.]

Lovelock: This movie really should just be all sphere all the time.

Starkwell: But then there would be no story.

Lovelock: How is that any different than it already is?

Once again, as they wrestle in the Tall Man’s lair, we end up seeing a glimpse into an alternate dimension, I assume Hell.  It’s as shocking and horrifying as it was the first time around… maybe more so.  Then they Sphere, stab and embalm the Tall Man with acid. And he blows up.  But then Hitchhiker is back and she’s evil, and I think Reggie dies, but then Tall Man is back and he grabs Mike and Liz but it’s a dream or wait no it’s not.   Honestly, it really is a fantastic sequel, even though neither Starkwell, Lovelock nor myself has any idea what the Hell is going on / just happened.
Documented by Kev D. and Posted at 09:30