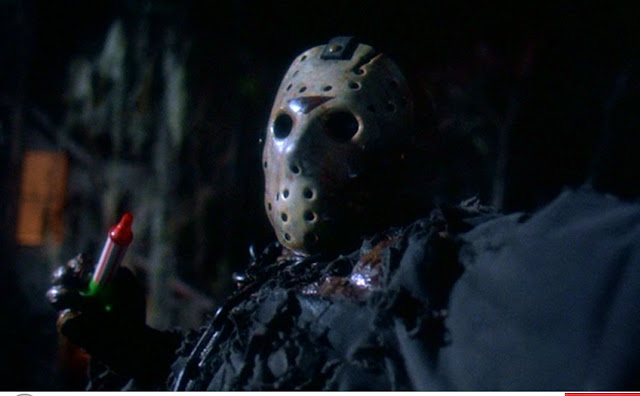 It’s time to see if “Jason Lives” was just a fluke.  It was a slashin’ good time, sure, but does Zombie Voorhees really have lasting power?  I mean, I know he does ON PAPER, since they made four other movies after this one (not counting remakes), but will this one hold up as the first Jason Post Mortem film has?  Will the fun end with the sixth movie?  As is usually the case with this franchise, new movie means new director, and in this case one who had recently participated in “Ragewar” and directed the first “Troll” movie.  So honestly, who knows what this one will bring?  Starkwell and Lovelock are eager to find out.  Eager or nervous or indifferent.  It’s one of those.

[Movie starts with a narrator talking about Jason, it shows clips from the various films.]

Lovelock: What is this a documentary?

Starkwell: Actually, that would have been a good idea!  A mockumentary would be a good way to bring new life into this stale as Melba series.

Lovelock: Dear filmmakers, movies should never open with a “'previously on' these fucking movies” ever.

The re-cap and opening credits went on for roughly five minutes, which is really dumb.

Starkwell: The music is totally ridiculous.

Lovelock: Yeah, and not in that good Fabio Frizzi way.

So there’s this blonde girl named Tina who wished her dad dead.  The dad then immediately fell in the water where JASON was left for dead... underwater.  Then it cuts to the present day, where Tina is some kind of recovering mental patient, who is being treated at (where her dad died) by  some creepy ass shrink named Dr. Cruz.

[It turns out that Tina has telekinetic powers.]

Starkwell: Wait… so it wasn’t Jason that made the dock break and made the dad fall into the water?  It was her mind?  Jason didn't kill her dad?  Bullshit.

Lovelock: Will Jason be in this one… or?

[Tina goes to the lake and wishes her father could come back to life.  Instead, she brings Jason back to life.  He comes out of the water like the X-Wing on Dagobah.]

Lovelock: She is the worst Jedi ever.

Jason then starts killing people, which is pretty cool I guess.  Lovelock was bummed he didn’t have his machete, but, rather, wielded some kind of knife.  This is the first film to feature Kane Hodder as Jason, and to be honest, it already shows that he is clearly the coolest of the Jasons.

Starkwell: Seriously, an undead super powered immortal Jason wasn’t enough?  They had to go and add in a girl having wild psychic powers too?

Starkwell: Is it just me, or is Dr. Cruz kind of a dick?

Lovelock: I’m still not sure if he’s a shrink, or some kind of scientist trying to harness her powers…

Jason punches through a dude, and steals his machete.  If that wasn’t enough to make Lovelock happy, he then killed a girl by picking her up in her sleeping bag and clubbing her against a tree.

Lovelock: Every movie should have that.

Starkwell: Not sure it would belong in every movie.

Lovelock: Are you insane?  Pick any movie where kids have a sleepover, and just have someone come in, pick up a kid and lob him or her into a tree.  It would be totally rad.

[Tina gets upset and psychically throws a TV at Dr. Cruz.]

Lovelock: Man, she should be taking over the world.

[While driving, Tina has a vision and crashes into a tree.]

Starkwell: Might be good to curb the world domination plans until she can control her ‘visions’ just a little better.  Or at least well enough not to crash into trees.

Jason continues to kill a bunch of characters we never even got to know (not getting to know them has not, however, stopped us from managing to see all of the female characters’ boobs).  The best death was when he shoved a party toot horn thing into a girl’s eye and made it honk.

[Girl gets thrown out of the window in her underwear.]

Lovelock: That’s why I always put pants on before exploring a spooky cabin.

Starkwell: I don’t think pants would have helped break the fall.

There’s a whole battle between Tina and Jason, where Tina is like mind throwing shit at Jason.  It’s kind of like when Vader fights Luke, mixed with scenes from “Home Alone”.  That was Lovelock’s description.  In the end she sets him on fire, and then somehow the entire house explodes.   Then, I think Tina’s father comes out of the water and pulls Jason in and the film IMMEDIATELY ends.  What the hell?
Documented by Kev D. and Posted at 21:45