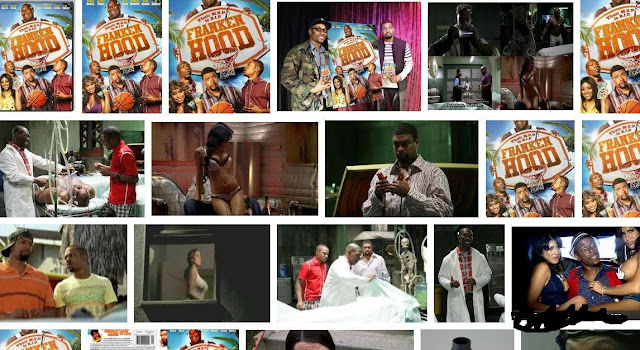 What do you get when you cross “Re-Animator” with like, umm… “Shaq-Fu”?  Maybe I'm thinking of "Kazam" or "Shazam"... In any case, JB Smoove and Charlie Murphy are in it… so how bad can it be?  That director's name “Blaxwell Smart” has GOT to be a fake.  Starkwell, Lovelock, you can thank Netflix for this one.  The guy who wrote this also wrote one episode of the recent TV show “Spartacus”.  Weird.

[Two dudes at a morgue.  Scheming.]

Starkwell: Wait, why is he wearing a welding mask?

To be completely honest, the jokes actually kind of work.  I mean, the opening line “scratch and win my ass, I’d have better luck scratchin’ my balls” was pretty solid.  And Charlie Murphy is just naturally hilarious.  Don’t get me wrong, the acting sucks, and the story is really stupid.  It’s about two guys, Motown and Darius, that are going to enter a “Street Ball” competition where the prize is $25,000.  I'm not kidding.

[Darius says what he want to do with his share of the money when they win… and it enters a dream sequence wherein he motorboats a woman’s bare breasts for like a solid minute.]

Starkwell: I have a dream, and it involves leaving you here to watch this by yourself.

Lovelock: Your loss… JB Smoove is only just getting his first scene!

Starkwell: Fiiiine… I’ll stick it out for a little while.

So Motown and Darius need a third player.  Apparently Charlie Murphy, MORGUE WORKER, is going to help them re-animate a huge dude for their team?  Also there is a love story angle! Between Tammy and Motown!

Starkwell: It’s alright I guess… Are they trying to jump starting a dead guy like an old Chevy?

[Then Starkwell slapped Lovelock in the face and walked out.]

After Charlie Murphy is electrocuted and carted off in an ambulance, Darius and Motown head back into the morgue to find Charlie Murphy’s weed stash.  It seems to be the most important and best thing they’ve ever done in their life ever.

[Motown and Darius get drunk, then stoned, and then the dead guy comes back to life, while they have a discussion about the nutty aroma of Darius’ farts.  Did I mention that the Dead Guy farted loudly several times while getting up off the table?]

Lovelock: Wow… I can only imagine if Starkwell were here.

Then the pair hide from Frankenhood in the car that they used to jump start him.  Which they then Hot Box.  And Frankenhood gets high.  And Frankenhood eats fried chicken.  Then they’re all friends and they hang out on the morgue couch, watching TV, drinking beers, smoking weed, eating fried chicken, and I think, dancing and freestyle rapping.  It was around here that Lovelock began asking me how much longer it would be.

[Motown gets the super idea to use Frankenhood as their third player for the STREET BALL tournament.]

Lovelock: How could this fail?  I mean, he’s known what fried chicken is for a whole day!  Hilarious!  He’s trying to eat the basketball!  Oh Frankenhood, you silly goose!

It’s become apparent that most of the JB Smoove scenes, while sparse and few and far between, are actually funny, and likely ad libbed.

Lovelock: Frankenhood!  You just ate the whole pan of peach cobbler! You’re so silly!  Oh now he’s drinking all the water!  Oh now he has to go peepee!

Once he became tired of making sarcastic remarks, Lovelock left, right before a scene where Darius and Motown helped Frankenhood learn how to pee, and Motown ended up with a face soaked in piss!  Classy stuff.  The next scene featured Frankenhood teaching himself to dance in a woman’s leopard print robe.  So anyways, there are a bunch of basketball scenes (slow moving and bad ones), some strip club scenes (Frankenhood shows off his dance moves!), Frankenhood changes teams (oh no! he joined the bad guys!), a Frankenhood sex scene (he’s all “DIS FEEL GOODZ”), but then Frankenhood goes back to Motown’s team (the “Freeballers”… get it?) and they win the tournament.  Apparently one third of twenty five grand was enough for Frankenhood to disappear to a tropical paradise with his girlfriend and retire forever.  Simply horrifying.
Documented by Kev D. and Posted at 22:45