Bruce Lee Fights Back From the Grave. 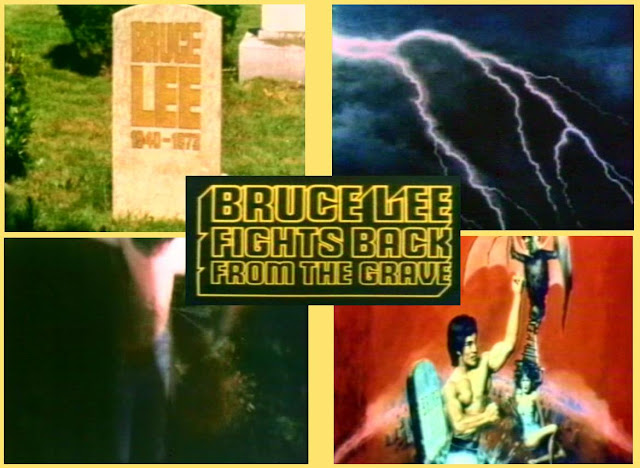 The film opens with a shot of Bruce Lee’s grave.  Then, there’s a very quick shot of LIGHTNING FLASHING.  Then a Bruce impersonator explodes out of the ground in front of the “Bruce Lee” gravestone.  Cut to a title shot that, for some reason, has a very ‘Star Wars’-ish font.  Then there is a still shot of some kind of painting of Bruce Lee uppercutting some kind of half man half gargoyle with a scantily clad woman watching.  This whole thing lasted twenty seconds.  Lovelock and Starkwell re-watched it twenty-five or so time.

[After the Gargoyle Punch Painting shot, it cuts very abruptly (the music even completely changes) to an airplane flying.]

Starkwell: Is it Bruce Lee on board?

Lovelock: Is he out for vengeance?

[Honestly, we never find out.]

After that, they agreed there wasn’t any point in watching the rest of it.  Honestly, they didn’t miss much.  The rest of the film is pretty standard low level seventies chop-socky.  I’ve seen Dragon Lee films with better fighting, better acting and a more comprehensible story.  Ask me if I like Dragon Lee films.  Also, I’m not even sure if the character is actually supposed to be an undead Bruce Lee or not.  We the audience don't know, and I don't even think the character in the film knows.  He doesn't refer to himself as Bruce Lee, doesn't really seem to be on a vengeance quest, really, and if he IS undead Bruce, he shouldn't be teaching Tae-kwon-do.  There's also a Chuck Norris impersonator at one point who gets all rapey pervert with a girl.  If there actually was a film that featured an undead Bruce Lee coming back from the grave, the first thing he should do, is go after all of the people that tried to cash in on his death and make a quick buck imitating him with lookalikes who, for the most part, couldn't even fight or act.  Horrifying.
Documented by Kev D. and Posted at 08:45