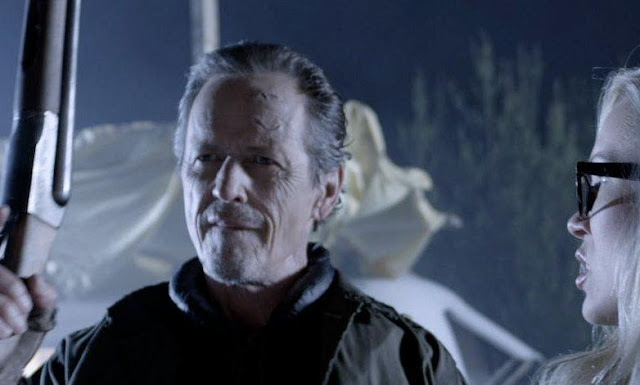 Ugh… another zombie comedy.  Honestly, at this point, my hopes that someone does something original are at an all time low.  Hell, I’d settle for someone re-doing something unoriginal, but at least doing it well.  If my hopes are that low I can only imagine where the hopes of Starkwell and Lovelock must be.

Lovelock: In the fucking toilet.

Anyways, this one is starting now, so pay attention.

[The film opens with an unlikely duo of a really hot blonde bad actress and an old dude with a shotgun wearing fatigues killing zombies, and the girl has some kind of crystal ball (I should mention that the old guy is Stephen McHattie, the guy from “Pontypool”, one of Lovelock and Starkwell’s all time favorite films.  This movie, like “” is a Canadian production).]

Starkwell: I know it’s still early in this film to say this… but… Stephen… no… How the mighty have fallen…

Anyways, for some reason there is some kind of mosquito camera angle, and there’s a badly overdubbed humming sound CLEARLY being made by a human.  But then the mosquito smashes into a windshield of a car being driven by the man characters – some dude named Steve and his horribly overbearing bride-to-be Tina, as well as Steve’s “too cool for school” sister Sarah and her dirty looking husband Craig.

[The mosquito from the beginning comes back to life, and is now a zombie mosquito… and is flying around making human noises, until it bites Steve.]

Starkwell: So what, like there’s a team of people with a crystal ball, hunting zombies, and no one knows about it?

Then Steve swats the mosquito and it completely explodes into gooey blood all over his face.  Anyways, it appears that Steve is slowly turning into a zombie.  Meanwhile Stephen McHattie and Blondie are hanging around a bunch of dead zombies.

[Steve has a black and white “Leave-It-To-Beaver” style dream wherein he craves brains.]

Starkwell: If there is one thing I will forever hate about “Return of the Living Dead”, it’s the fact that every half-assed zombie comedy since thinks that it’s necessary to make zombies crave and say “brains”.

Lovelock: Don’t get me started on that.

[Steve and Craig go out for a run, and Steve seems to have super senses.]

Lovelock: So far, getting the zombie bug don’t seem so bad.

Starkwell: I’ll tell you what DOES seem so bad so far.

[The Blondie is apparently a scientist, and theorizes that someone infected STEVE style could lead to a cure.]

Starkwell: Of course she’s a scientist.

[Blondie and McHattie visit the cabin where Steve and the gang are and ask them if they’ve seen any zombies, which makes Steve immediately draw the conclusion that he is a zombie.]

Starkwell: Right.  That makes perfect sense.  Not only is he not surprised by Blondie’s magic crystal… he believes every word and decides he’s a zombie.

Then there was a lengthy Steve SUITING UP montage, in an obvious (read: FORCED) and lame nod to Ash, followed by him failing to hunt raccoon (for their brains).  He fails and ends up eating Tina’s bunny.  Then the movie gets even dumber.

Starkwell: They all witness him eating the bunny’s raw brains out of its head, and yet, they don’t seem all that worried.  They seem more angry at him for apparently LYING about being a zombie.

So, the main characters all go to the general store to buy some brains from the butcher, who, for some reason, has a wide selection of animal brains.  Starkwell starts really losing it at this point.

Starkwell: THIS IS EVERYTHING THAT IS WRONG WITH THE GENRE!

[Then Starkwell punched Lovelock in the sack and ran away.]

Starkwell left at the right time, since shortly thereafter the whole gang started laughing about the fact that Steve eats brains and can’t feel any pain.  There’s even a montage of them hanging out and having fun at the cabin.  Anyways, the day ends with Steve vomiting up all of the animal brains that he ate.  Apparently he needs human brains.  Lovelock stayed pretty quiet, mostly tending to his sore balls, and groaning about how shitty he feels this movie is.  There is an occasional joke that works, but it’s in between a lot that don’t.

Lovelock: Of course the two girls get into a fight and end up spanking each other.

Lovelock: Of course Tina and Sarah dress up as hookers to lure a guy for Steve to eat.

Right around the time they showed a guy peeing on another guy’s head, Lovelock seriously almost called it quits, but wanted to see more McHattie.  I think he said “Bad McHattie is still better than no McHattie”.

Lovelock: That’s the first smart thing that any character has done.

[Craig and McHattie drop about 400 f-bombs.]

Lovelock: What was this written by a fourteen year old?

In the end, McHattie and Blondie both die, making it COMPLETLEY POINTLESS TO HAVE HAD THEM IN THE MOVIE IN THE FIRST PLACE, and Steve stays a zombie.  Then while the credits roll, there’s a montage of wedding photos wherein Steve is a zombie groom.  Look Steve’s dancing with Tina’s Grandma!  Oh no Steve! Don’t try and eat her brains!

Seriously, fuck this movie.
Documented by Kev D. and Posted at 23:36