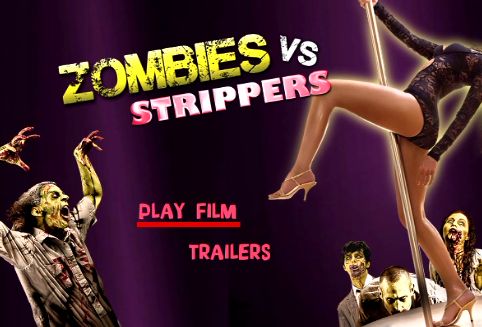 Not to be confused with any other zombie films in the last few years that have the words “zombie” and “stripper” in the title, this one sets itself apart by being “Zombies vs. Strippers” as opposed to “Strippers vs. Zombies”.  Look, I know that sounds thin, but I was just trying to find ONE nice thing to say about this total turd before I fling it directly at Starkwell and Lovelock’s respective eyeballs.  “Full Moon” is really giving “The Asylum” a run for their money for the title of 'Kings of “we make shitty movies all of the time, deal with it”'.   That title sounded more positive than it should have.  It’s not a good thing.

Starkwell: When your movie is only 75 minutes long, and your opening credits last almost four minutes… it ain’t a good sign.

Starkwell: Of course his name is Spider.

Lovelock: There is no way that a shitty strip club in the middle of nowhere that is FAILING would have a girl that would even look somewhat CLOSE to that good.  And she doesn’t even look that good.

Starkwell: Not to mention, there aren’t any customers… so why would he need a bouncer, a bartender and four strippers on hand?

The film is trying real hard to develop characters.  Here’s the problem: They all suck and the acting sucks and it’s so stupid.  Anyways, then a girl named Bambi strips in front of two guys that have obviously become zombies.

[One zombie eats the other zombie’s hand.]

There’s a black girl named Vanilla and she is literally a textbook of bad stereotypes.  Then there’s a super long scene where Spider tells everyone he’s closing the bar and the characters go on and on about their shit.  And then they throw a party or something.  It’s honestly like a ten or fifteen minute long scene, and it ends with a customer coming in and offering them a bunch of money to keep the bar open for him.  He kind of looks like a cross between Carrot Top and Adam Ant.  It all sucks.

Lovelock: So, they’ve definitely established the Strippers portion of “Zombies vs. Strippers”… What with the fact that we’ve seen a million boobs and only two zombies.

[Zombies finally show up at the club, saying “brains” repeatedly.]

It didn’t get any better.  Because, you see, once they took care of those zombies, that was it for another twenty minutes at least.  I’m glad they left before they could see just how bad it kept getting.  I think Vanilla said “This is your brain on drugs” at one point.  Also, there was a Michael Jackson “Thriller” zombie that did Jacko dance moves and grabbed his crotch.  Also, it’s one of the slowest moving films ever.  Seventy five minutes feels more like infinity hours.  It’s like they thought by casting porn stars, and then sprinkling a booby and an ass here and there we’d forget that nothing happens and that none of it makes any sense and that it all sucks and that it's the worst.  Guess who ain’t buying?
Documented by Kev D. and Posted at 07:00