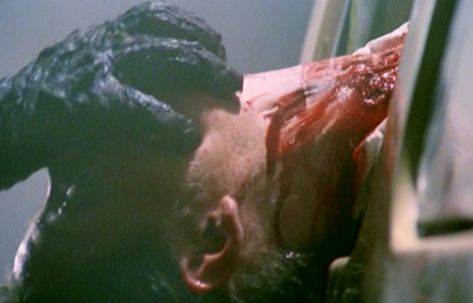 “Zombie 5” was a film released in 1987, before “Zombi 3” and “Zombie 4”,  the two 'previous' films in the fabricated series of “Zombie” movies (which start with “Dawn of the Dead” somehow).  Obvioulsy at the time, they didn't KNOW it was the fifth installment yet.  How could they?  The third hadn't happened. If that isn’t already enough nonsense, this one involves birds.  It is safe to say that “Killing Birds” was not Robert Vaughn’s finest hour (and a half).  No doubt said hour (and a half) will feel quite a bit longer to the unprepared Starkwell and Lovelock, who are going into this expecting the wacky shenanigans of parts 3 and 4.  Man, are they ever in for a letdown.  How bad is this movie?  Joe D’Amato is an uncredited director.

[Some kind of Johnny Rambo returns from war only to find his woman in bed with a man, that he then kills.]

[He kills her next.  Then he kills the two neighbors.  He spares their baby.  But then the birds peck out his eyes.]

Lovelock: And that’s why I’m afraid of birds.

Starkwell: No one is forcing you to keep like a hundred falcons on your porch.

[Soldier Boy is treated at the hospital, and then given back the baby, which I guess is his baby now (???).]

Starkwell: How did he get to the hospital without any eyes?

Lovelock: I’m sure the ambulance came to get him…

Starkwell: They didn’t notice the four dead bodies, his bloody knife and clothes… they didn’t ask about the birds?

Lovelock: It’s probably not legal to have that many hawks and falcons in cages with those little hats.

Starkwell: Also, what kind of hospital just says “Here you go, guy with no more eyes and a bandage around your head who appears to be bloody, mute and homeless… take this tiny infant and be on your way.   Godspeed.  It is your baby right?” ???!?!?!?

Lovelock: The kind of hospital found in terrible movies.

They talked for a while about the different birds, and just how many holes in the plot this one scene had already created.  They decided that this might be the laziest, most irresponsible and incompetent writing they have ever come across.  They missed a whole mess of other garbage, including some of the worst acting anyone will ever see, while they compared it to other horrible movies.

[A mish-mash of eighties clichés and bad actors make up a group of bird watchers, journalists and photographers that will be going to watch birds… I guess at Blind Rambo’s house.]

Lovelock: I’m staying, but mostly for the music, and to see Robert Vaughn.

[Enter blind, mangled, Robert Vaughn.  He is a bird expert and two of the students interview him for his… knowledge… I think.]

Lovelock: Well, I’ve seen Robert Vaughn.  So what, they’re looking for a special bird… or?

Then there’s a bunch of bird footage and a dude fake-playing a harmonica.  The teens all smile at one another and have a great time filming what looks to Lovelock like “the same four birds over and over again”.

[They find an abandoned truck with a decomposing corpse in it.]

Lovelock: Aww… just a plain corpse… I guess it was too much to hope that there would be zombies in a movie called “Zombie 5”… somewhere in the first hour or so.

Running scared from the corpse, the teens come across an abandoned old house that they then decide to explore, seemingly unaffected by the fact they just saw a dead body.  It’s clearly the house where Robert Vaughn killed those people all of those years ago.  It takes them like ten minutes to explore the house, find nothing and have nothing happen.  Then randomly one of the teens starts FREAKING OUT and seeing zombies.

[Dude sees his girl crucified… but it was all in his imagination.]

Lovelock: He sure is scared of that blind guy.  Also, he sure is sweaty.  Also, I sure am bored.

Then one of the characters whipped out a gigantic late eighties laptop and Lovelock spent the next ten minutes talking about how far technology has come.  He almost ends up missing the first actual zombie attack.

[Blonde girl has her head smashed in.]

[I honestly don’t know why he would say that.  This is one of those moments that would have left Starkwell bewildered.]

Nothing is ever explained.  At one point a dude spontaneously combusted and Lovelock laughed so hard that he threw up a little.  But that was really the highlight for him.  Well, that and the part where the girl’s head is sort of pulled off.  Pound for pound, this movie truly sucks.  As bad as you think it is, it’s worse.  Also, where did the baby go?

Lovelock: More like "Zombie 5: Killing the Series".
Documented by Kev D. and Posted at 08:20