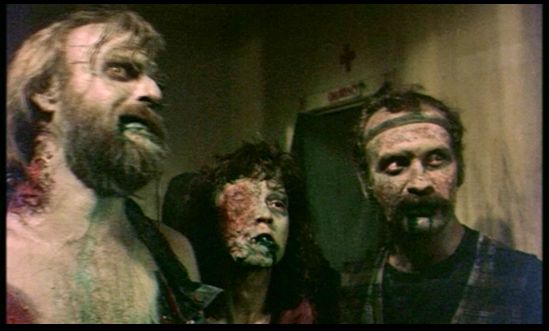 Claudio Fragassi is best known as the visionary behind “Troll 2”.  But honestly, he is SO MUCH MORE THAN THAT!  He seemed to have spent the better part of his directing career under either an alias (this one for instance is credited to one ‘Clyde Anderson’), or as an uncredited director brought in to finish works that were abandoned by Bruno Mattei.  If Mattei gives up on a movie, I’m afraid to see the finished product.  Nonetheless, here we are.  “After Death” or as it is also known “Zombie 4”, begins with a throaty dude talking complete nonsense about a group of humanitarian scientists who conduct research on a remote tropical island, research to fight man’s oldest foe: DEATH.  Then horrible eighties synth rock starts playing and Lovelock and Starkwell immediately start rocking out all over the living room.  Buckle up folks, this is gonna be one nutty ride.

Starkwell: I’ve got a sneaking suspicion that they won’t explain much in this one.

[Tina Turner sinks into the ground, and floats to hell.]

Starkwell: Luckily, the group of nerds with machine guns and flashlights seem to know what’s going on.

Lovelock: Also, they look like they work in a zoo.

[Nerds gun down Voodoo Priest, Tina Turner explodes out of the ground, as a zombie and rips off one nerd’s face.]

Lovelock: When things make me happy, I find it best to stop asking questions, and fall deeply in love.

Starkwell: What's love got to do with it?

There are a bunch of characters.  We don’t really know who any of them are, or how they relate to one another.  I don’t think that really matters, since most of them have already died, and there are rabid running zombies everywhere trying to kill, and likely eat everyone.  Lovelock is grinning from ear to ear.  Starkwell is grinning too, but mostly because he’s laughing so hard at the movie.

[Some little Blonde girl survives, and now we flash forward to her all grown up and she and her mercenary friends end up on the very island where everyone died.]

Starkwell: So how did she survive?  What happened to the… ? Why wouldn’t she know that wasn’t just a dream? What… the fuck… ? Who has mercenary friends?

Starkwell: Will it vomit answers?  Please?

Lovelock: Who needs answers when you have people being eaten every minute?

Starkwell: Well, me, for one.

Lovelock: Your loss.  YOUR LOSS.

Starkwell: Wait, did she mean to go back to that island?  I’m confused.

[A group of three researchers venture into the cave, end up swarmed by zombies, two are eaten.]

Starkwell: Dude, it’s all bad.  This whole thing is bad.

[Then they show the same zombie rising out of a grave twice, almost in a row, and Starkwell and Lovelock both laughed hysterically.]

Then the Surviving Scientist meets up with the Mercenary Gang, and they blow away a million zombies.  But they JUST KEEP COMING.  This movie’s body count is impressive, and we’re only an hour in.

[One mercenary turns zombie, eats girl’s face, goes after Blondie, and then absolutely everyone shoots him in the face.]

Starkwell: I love how they were like “We can’t kill Tommy!” and then one minute later all scream “Kill him!” and machine gunned his face.

Lovelock: Yeah… real conflicted… and then they throw his body into a bonfire.

Then Blondie SUDDENLY remembers everything about her past.  Seriously, every intricate detail, details she couldn’t possibly know, since she was only like four at the time.  Starkwell rolled his eyes so hard he passed out momentarily.

Lovelock: Can we just stop for a moment and talk about how killer this soundtrack is?

[Suddenly one of the zombies has a consciousness and can talk and laugh and use a gun.]

Lovelock: No seriously, why not?

Lovelock: Did he just FISTPUMP while exploding?

Starkwell: Does that make it good?

Lovelock: That makes it the best.  The best ever.

Blondie tries to close the gates of hell, she fails, her face explodes and Captain Science is ripped apart.  Now she becomes the QUEEN DEMON.  I think.  Same synth rock from the opening credits start playing and Lovelock plays air guitar so hard he starts crying.  Starkwell just leaves the room.  It’s obviously no “Zombi 2”, and it doesn’t quite hit the hilariously explosive heights of “Zombi 3”.  But “After Death” certainly earns itself a place in history among the best of the “so bad they are good” movies, wedged somewhere just below “Zombi 3”, which in turn is being sat on by “Nightmare City”, which is being peed on by most of Lucio Fulci’s work.
Documented by Kev D. and Posted at 16:30