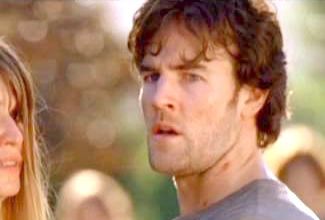 This is sort of along the lines of a “Village of the Damned” sort of a thing… it’s all basically been done before… but has it ever starred DAWSON?  James Van Der Beek stars in Hal Masonberg’s straight-to-DVD picture “The Plague”.  Alright, here we go.  It was produced by Clive Barker, so, obviously, his name is on the cover in bigger writing than any of the actors.  Might even be bigger than the film title.  It is, however, Hal Masonberg’s only film credit…  ALWAYS a good sign.

[Ten years ago, every kid in town (possibly the world?) seems to have fallen ill… woken up with a frothy mouth, eventually they all had seizures and then become vegetables.]

Lovelock: You say that now, but just wait until Dawson shows up.

Starkwell: Is that going to help?

Lovelock: It will help prove your theory.

So it turns out THERE ARE NO CHILDREN in the entire world.  All kids are born dead, or, well, in a coma-dead.  It’s actually pretty fucked up.  The kids from ten years ago are all still alive, but they’re all in comas and kept in huge High-School Gyms turned Hospital.  Then Dawson makes his grand entrance, walking around a ghost town of rusty playgrounds and closed schools.  The youngest functional people in the world are 19. All the Coma Kids have seizures every day at the same time.  Dawson is an ex-con.

[Dawson visits his brother and ex-wife.]

Starkwell: Of course there’s an ex-wife.

Lovelock: Man, I just want the damn Coma Kids to wake up and start strangling people.

[Coma Kids all stand up and rip out their IVs.  Nurse is attacked.  Meanwhile, Dawson's nephew attacks his Dawson's brother.]

Starkwell: Ask and ye shall receive.

Lovelock: I guess… but they didn’t SHOW the nurse being strangled.

Starkwell: Dawson doesn’t seem very shocked considering he just found his bro with an exploded head and he just threw his nephew out the window.

Lovelock: Yeah but his hair is fantastic.  Sexy complications?  Likely so!

So then Dawson and the ex-brother-in-law go to find the ex-wife (not his brother, his brother's dead, he met up with his ex-wife's brother).  She’s a nurse (obviously) and works at the high-school gym where all the Coma Kids are being held (obviously).  Starkwell and Lovelock didn’t have much to say.  The movie is fairly cookie-cutter horror, part “Village of the Damned”, part “The Crazies”, part bad over-acting, and with a sprinkle of shitty dialogue.

Lovelock: Considering it’s likely that all of the Coma Kids in the world probably woke up, you would think there’d be a more interesting place to focus on than a shitty high-school in a shitty small town.

Starkwell: On this movie’s budget?

Starkwell: Of course they’re hunkered down in an old church.

Lovelock: Well, yeah.  That way they can cut to random shots of Jesus.  And Mary.  And Bible.

The Coma Kids all seem to have a collective mind.  They take people’s souls and learn all that they know… together.  Also, now they have guns.  In the end, I think Dawson ends up offering his soul to them and making them disappear.  But then they’re back and Dawson is probably one of them now.  Great work, Dawson.  The end.
Documented by Kev D. and Posted at 18:30