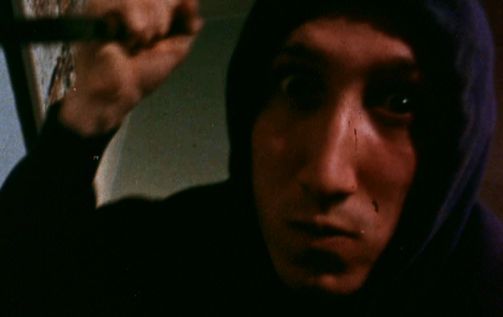 Ray Dennis Steckler had a number of different aliases that he went by.  Usually this happens when a director also works in porn.  Well, Steckler was no exception.  In any case, this 1964, "world’s first, monster movie musical", is often regarded as one of the worst films of all time, and Steckler’s best work.  How does that happen?  What does that say about the rest of his work?  I for one can’t wait to confuse the bajesus out of Starkwell and Lovelock by finally showing them something that truly needs to be seen to be believed.  The film starts off at a carnival, and an ugly psychic is being insulted by a drunk guy.

[Lady Psychic orders creepy looking man servant Ortega to turn the Drunk into one of her pets, they pin the Drunk down and pour something labelled poison all over his face.]

Lovelock: What the hell is on her face?

Starkwell: Ortega might be one of the scariest things I’ve ever seen.

The credits roll and show a dude mutating into some kind of disfigured being.  Then there’s this really long dance scene.

Starkwell: We’re only a few minutes in, but CLEARLY we can see that "discriminating" is not one of Steckler’s strong suits.

Lovelock: All filler no killer.

Steckler, playing some slacker dude named Jerry, has a conversation with a heavily accented European friend, named Harold, who is CLEARLY reading his lines off of the “magazine” he is holding.  Jerry and Harold go to pick up Jerry’s girl.  Obviously her mother doesn’t approve of slacker Jerry, who claims “the world is my college.”  They go to the carnival.

[Horrible stand up comedian is the warm up act for the dance act we saw earlier, which we now see again.]

Lovelock: Is that what the open mics you do are like?

Starkwell: Actually, that’s much funnier than most of what I sit through.

Starkwell: I’d imagine that given the size of cameras in the sixties, it must have been kind of insane to take one onto a roller coaster like that.

Lovelock: Steckler don’t care.  He don’t care about nothing.

Lovelock: Here’s a reading: Hey DANCER LADY, you look like a DUDE.

[Jerry, Harold and Angela go see the Psychic, Angela has her fortune told.]

Lovelock: Madame Estrella should tell Angela to tone down that bee hive on her head.

Starkwell: It’s a fortune reading not a fashion consultation.

After that first scene before the credits, seriously, nothing has happened.  Starkwell and Lovelock agreed that “he set the bar a little too high a little too early in the film.”

[Jerry decides to go see the nudey show, Angela doesn’t want to, so Jerry tells Harold to drive her home.]

Starkwell: Seriously… who is Jerry?  Who does he think he is?

Lovelock: Jerry is the man, I guess.

Then we see the whole show, minus the nudity.  But they made sure to show the lengthy ballad sung by “girl with bee-hive hair-do number a million”.

Starkwell: Why would the bulk of the audience at the strip show be older women?

Then Jerry went backstage to meet the stripper Carmelita, but was ambushed by a hypnosis session given by Madame Estrella, with Ortega and Carmelita watching.  After a few minutes and some horrible sounds effects, Jerry is eventually under Madame Estrella’s control.

Lovelock: I know it SAID it was a musical, but I guess I was expecting the musical elements to somehow incorporate zombies, as opposed to just being a bunch of shitty people performing shitty music sandwiched in between insane shots of Steckler being an asshole and Warty McPsychic doing evil with her mutant sidekick.  Also, dancer lady that kinda looks like a dude.

Starkwell: Well, we’re half way there… so… it will all be over soon enough.  Ugh… more stand-up?

[We see the same dance number for the third time.  Then a possessed Jerry kills the two dancers.  DURING THE SHOW.]

Starkwell: Why didn’t the film just start around this point?  It would have saved us forty five minutes.

Lovelock: That would be too easy.

Starkwell: Wait, that’s it?  No one is going after Jerry?  He just killed two people in front of an entire audience.

Then there was the most amazingly nonsensical dream sequence that made Lovelock shit his pants.

[Jerry gets up and goes to see Harold.]

Lovelock: Well, also, he did just kill some people.

Starkwell: Yeah but she don’t know that.  Only the entire crowd at the carnival/nightclub know that.

[Jerry goes to see Angela, she twirls her umbrella, Jerry is hypnotized and strangles her.]

Starkwell: Jerry LITERALLY gets away with murder.  And attempted murder.

Anyways, the movie trails on with more crappy musical numbers, and Harold working with Angela and her family, trying to get a hold of Jerry before the police find out about him.  Neither Lovelock or STarkwell really understand "what's in it for Jerry?", but they're ignoring that.  In the meantime, Jerry is going around killing people.  There was a shot of Jerry killing some dude, but we only saw the shadow of Jerry stabbing the shadow of the dude in the head.  It was pure genius.  Lovelock and Starkwell watched it over and over again and laughed hysterically.

[Psychic and Ortega try to put Jerry in the cage with their other Acid Face Melt Zombies, the zombies escape and start strangling everyone in sight!]

Lovelock: Take away all the shitty musical numbers, and you actually have a pretty enjoyable turd of a film here.

Starkwell: It would only be seven minutes long.

Lovelock: Well, no one likes a long turd.

Starkwell: Unless you’re really backed up.

Lovelock: Why are all the zombies dressed the same?

Then the zombies interrupted yet another long dance number by strangling a bunch of the dancers.  Then the cops show up and shoot all the zombies.  Lovelock can’t help but wish that the zombies had made their appearance much sooner, and had stuck around much longer.  Eventually, after a long beach chase, Jerry dies too.  And the crowd goes wild.  The end.  This certainly is one giant unforgettable mess.
Documented by Kev D. and Posted at 09:40