I Walked With a Zombie. 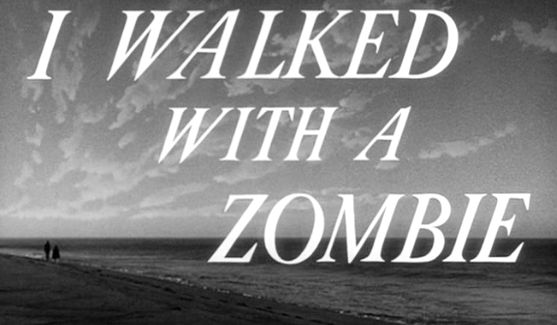 Jacques Tourneur is often one of those names you hear referenced by film makers when talking zombie shop.  Considering that this is his one and only major entry into the genre, hopes are staggeringly high for this film.  This one was a Val Lewton production for RKO Pictures, which means the budget will be shoestring but that, nonetheless, the expectation is still that it will leave the crowd pleased.  When Starkwell and Lovelock are the crowd, it is almost impossible to predict these things.

Lovelock: Wait… there’s an actor named Sir Lancelot?  How old is this movie?

Nurse Betsy, from CANADA, is sent to St-Sebastien to care for a rich dude’s wife.  There is a lot narration by Betsy as she goes about her business, as this whole thing is a flashback.  The mood, atmosphere, lighting, set design, directing, acting and writing are all top notch.  This of course means that Starkwell is ecstatic and Lovelock wants something to explode.

[Betsy hears a woman crying, while searching for the source she wanders into the sickly Ms. Holland wandering around like a zombie.]

Lovelock: No job is worth this shit.  I’d run home to Canada.

Starkwell: You and me both.

It is clear that Betsy’s employer Mr. Holland is creepy and not to be trusted.  Lovelock feels like it’s mostly due to his awful moustache.  Starkwell feels it’s because he CLEARLY is keeping his wife as some kind of horrible zombie.

[Singer Man sings a creepy song about the island.]

Lovelock: That’s the same guy and the same song in “Zombies On Broadway”.

Then there’s a whole thing where Betsy is worried about Wesley’s drinking problem.  But then she’s clearly hitting on Paul (whose wife she is caring for).  Starkwell was all confused.  He was sure she was into Wesley, but then suddenly she liked Paul.  Lovelock called her a slut and tried to high-five Starkwell, who then left him hanging.  Eventually Betsy hears that there are Voodoo Witchdoctors that could potentially help Ms. Holland and decides to bring Ms. Holland to them in the middle of the night.  It's all a bit soap opera-ish.

[There at the Voodoo ceremony, while Betsy has a conversation with Paul and Wesley’s mother, the natives stick a sword through Ms. Holland’s arm, which doesn’t bleed.]

Lovelock: That’s no way to treat a guest.

Starkwell: “Who’s this?  She doesn’t speak much… Let’s put a sword through her arm.”

Starkwell: I’d hate to see the people that fail their test.

Lovelock: "The good news is, you're not a zombie.  Bad news? Well, you're about to die, I think I nicked an artery."

After Betsy takes Ms. Holland back home, the natives continue their ceremony, this time using some sort of doll they have dressed up like Ms. Holland. Eventually Paul and Wesley’s mother finally told everyone that she moonlights as a Voodoo Witchdoctor.

Anyways, Paul opens the gate to let zombie Ms. Holland wander the jungle in search of her Voodoo Masters.  But then he kills her and drowns himself in the ocean.  Then one second later, “THE END” and epic music plays.  Way epic, and way depressing.

Lovelock: So wait, I’m still confused.  Isn’t Betsy married to some guy in Canada?
Documented by Kev D. and Posted at 21:15